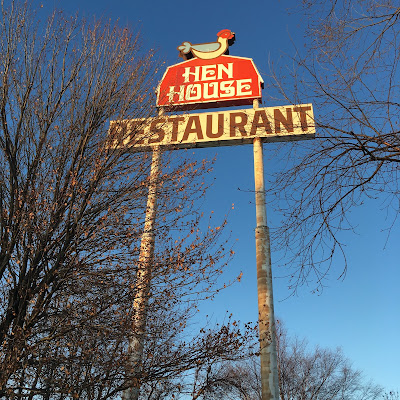 So long, dental plan!
Due to an ambitiously planned travel schedule and a few unforeseen circumstances, I drove a total of 5300 miles between December 18th and New Year‘s Day. That’s a lot of windshield time, even for a haggard old road warrior like me, and as a result, I’ve only just recovered after a weekend spent sleeping heavily in between extended naps. The point of all this travel was to visit a handful of far flung restaurants that fit broken chain theme, and I’m happy to report that I’ve dined at enough broken chains to satisfy my blog post and caloric requirements well into February.
Lisa needs braces.
The first stop on my trip was an obligatory lunch at the Joliet, Illinois Rax after a quick jaunt across Michigan and the northwest corner of Indiana on I-94, but somewhere on I-55, which, in Illinois, runs more or less concurrently with what was the famed Route 66, the reality that I was on a bona fide road trip set in. It was therefore fitting that my second stop of the day was at a place designed with road trippers in mind.
Dental plan!
Exit 90 on I-55 on the south side of Springfield, Illinois has the feel of an area that has long been an oasis for travelers. To the west of the interstate stand both a shiny new Road Ranger truck stop and the Route 66 Motorhead’s Bar, Grill, and Museum which operates out of a former Stuckey’s building. Across the interstate stands a collection of chain motels of varying ages, a Cracker Barrel, and a weather beaten barn-shaped sign topped with a blue and white chicken that advertises the similarly barn-shaped Hen House Restaurant that’s tucked between an abandoned Hardee’s and a tired looking Motel 6.
Lisa needs braces.
Hen House restaurants sprung up along the major highways of the American Midwest in the late 1960s back when a rural image was a requirement for selling hot meals to travelers (see also Bob Evans, the aforementioned Cracker Barrel, and Dutch Pantry) and for selling fried chicken (see also Kentucky Fried Chicken, Minnie Pearl’s Chicken, Red Barn, and Country School). The chain peaked at around 42 locations in the early 1980s, but bankruptcy in 1991 forced the company to liquidate. Most locations closed except the handful of franchised Hen House locations in Illinois which remain open today, operating independently. The Springfield Hen House is one of these, and it has outlived the vacant Hardee’s and converted Stuckey’s that occupy the same exit.
Dental plan!


I had been meaning to visit a Hen House for a blog post for months and was excited to arrive there late on a Wednesday afternoon. I had only seen pictures of Hen House buildings, and was surprised to find the restaurant that had looked imposing and barn-like in pictures was instead diminutive and decidedly shed-like in person, standing a story and a half tall with a roughly Waffle House-sized footprint.
Lisa needs braces.
I took a seat in the dining room, noting rustic, well-worn wooden tables and booths, and various nonspecific farming tools lining the wall. It immediately reminded me of a scaled-down version of the surviving Dutch Pantry location I visited in West Virginia.
Dental plan!
I studied the menu, and found there was more than fried chicken offered, but in an effort to both pace myself on what would become a grueling fortnight of eating and travel and to order the quintessential Hen House meal, ordered a two piece chicken dinner with coleslaw, macaroni and cheese, and the vegetable of the day, which my server determined was peas after running to the kitchen to confer with the cook. She told me they were out of rolls and offered me hot biscuits instead. I gladly accepted this offer, which sounded like a definitive upgrade.


The coleslaw arrived first, followed by the hot food ten minutes later. I suspected that my chicken had been fried to order and a quick feel for temperature confirmed my suspicion. The leg and thigh that I ordered didn’t quite rise to the level of Maryland Fried Chicken, which still holds the title of best broken chain fried chicken, but with its freshly fried light and crispy breading Hen House is a close second. The coleslaw was creamy and sweet, with a seasoning blend that gave it a curious, but not unpleasant, subtle root beer flavor. The macaroni and cheese was simple in its composition, but had been made from scratch. The peas, on the other hand had the gray-green pallor of canned peas and the uniformly scalding temperature of peas that had been microwaved for slightly too long. Not even a generous dollop of butter could make them palatable. The biscuits which, if not freshly baked, had at least been carefully warmed up in an oven more than made up for the peas, though. Their warm fluffy innards were the perfect vehicle for delivering the contents of the little tubs of apple butter from my table’s jam and jelly caddy to my face.
Dental plan!

After finishing my meal, I walked past the little display of candy, cheap toys, and T shirts by the door to pay my bill. I must have raised my eyebrows all the way to my receding 30-something-year-old hairline when the cashier told me I owed $18 and change before she realized she had misread the handwritten bill and quickly dropped the amount to something below $10. I thanked her, and adjourned to the parking lot to take more pictures.
Lisa needs braces.
I was midway across the Motel 6 parking lot next door, attempting to get a picture of the massively tall sign meant to be seen by motorists on I-55 when it occurred to me that the little roadside restaurant that was a destination for me exists as a liminal space for most of its visitors, at least historically.


Dental plan!
Liminal space is a place or time of transition, what exists between what was and what is next. Roadside restaurants and convenience stores, highway rest areas, waiting rooms, and airports are all examples of physical liminal spaces. They exist not as destinations themselves, but as corridors between destinations as and as such they all tend to provoke a slightly creepy, unsettling feeling in human beings that occupy them.
Lisa needs braces.
The four surviving Hen House restaurants situated along major interstates have survived decades after the demise of their parent company as liminal spaces, a place for a quick hot lunch while on the road or a decent dinner within walking distance of the motel that’s your creepy, liminal, temporary home between two or more long days of driving. Over the ensuing decades, the businesses that line interstate exits have become increasingly homogeneous and bland, which if anything, increases their unsettling liminality. Places like Hen House on the other hand, have become increasingly rare and novel, and in my opinion are long overdue to become not liminal spaces, but destinations in their own right, whether you’re making a special trip to visit one or, stopping in for a meal on the way to somewhere else, Hen House is a more memorable, and decidedly less liminal than a stop at a national restaurant chain. Just be sure to get biscuits, skip the peas, and make sure your bill is written clearly.

Posted by Zap Actionsdower at 5:24 PM