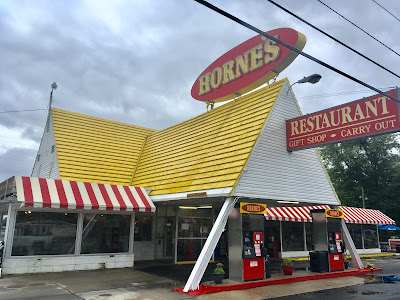 Loyal readers of Broken Chains may have, by now, deduced that I spend a lot of time on the road. Years ago, I had a job that required me to drive 1000-1500 miles per week. All that windshield time caused something to permanently shift in my brain, and now I start to feel antsy if I don’t take at least a short road trip once every few weeks. My time in the car gives me a chance to remove myself from the stresses of everyday life and just be alone with my favorite podcasts on the way to a historically interesting meal or two. While on the road, my preferred pit stops are at the large travel plazas open to both professional truckers and amateur road warriors like myself. More often than not, places like Flying J, Love’s, and TA have an abundance of gas pumps, reasonably clean restrooms, and a place to grab a snack or a full fast food meal. The idea of one stop to take care of all the typical travel needs appeals to anyone who’s trying to travel efficiently. The modern travel center fills a niche today that 50 years ago was filled by places like Stuckey’s, Nickerson Farms, and Horne’s.

In a time before strict zoning restrictions, outrageously styled buildings with brightly colored roofs stood by highways beckoning travelers, and their children, to stop and spend money. Whether it was an orange-roofed Howard Johnson’s, a red-roofed Nickerson Farms, or a yellow-roofed Horne’s, the architecture of the building served as an advertisement as much as the billboards that counted down the miles to their next location.

Bob Horne opened his first roadside candy and souvenir shop a short distance from his family’s motel outside Jacksonville, Florida in 1948. Like Nickerson Farms, Horne’s also has a Stuckey’s connection, as Bob Horne worked at the original Stuckey’s in Eastman, Georgia before striking out on his own. Horne and his father took their enterprise public to raise money for expansion and succeeded in expanding quickly thanks to the rise of leisure travel and a booming postwar economy. The concept eventually evolved to include a sit down circus themed restaurant, dubbed Horne’s Circus Grill. Some locations had on site motels as well. By the time Horne sold his enterprise to Greyhound in 1964, the chain boasted 55 locations and would eventually peak around 60. The brand’s decline began in the 1970s as so many businesses set up to cater to traveling motorists did. Thanks to a combination of a decrease in leisure travel due to various oil crises and economic recession and increased competition from the growing network of fast food chains, Horne’s had all but disappeared by the mid 1980s. The 60 unit chain eventually shrank to just one location in Port Royal, Virginia.


Between stops at Roy Rogers in Maryland and Darryl’s in North Carolina, Esmeralda Fitzmonster and I were able to stop by the last operating Horne’s for breakfast. The building, a tall A-frame with a brilliant yellow roof adorned with its original neon sign seems to look much like it did in when it opened in 1961. Aside from modern products on the convenience store shelves, modern gas pumps, and updated restrooms, the place felt untouched, and generally well maintained.


It was mid morning on a weekday when we sat down in what looked to be an original booth opposite the counter, still adorned with a striped awning meant to evoke a circus tent. Our waitress took our drink orders and handed us some nicely printed menus.

Before discussing the food at Horne’s I should probably digress a bit to provide you, the reader, with some background information. Living in Metro Detroit, Esmeralda and I have a high standard for breakfast food. Seemingly every corner of our fair city has a “coney island,” an establishment traditionally run by Greek immigrants and their families, specializing in Detroit style chili dogs, diner food, and all day breakfast. Coney islands have little to do with the eponymous Brooklyn amusement park beyond a loose connection to hot dogs. Many area independent restaurants as well as a handful of unrelated local chains refer to themselves as coney islands, but you can expect them to have largely the same menu, including a large selection of delicious breakfast offerings for a decent price. In my six nonconsecutive years living in Metro Detroit, I’ve eaten hundreds of breakfasts at coney islands from Ypsilanti to Mt. Clemens, and I can’t remember ever having a bad one. If there’s one area where the Detroit coney islands excel, it’s breakfast even more so in my opinion than their namesake coney dogs.

It is with this relationship to breakfast food informing my perspective that I ordered a western omelette, hash browns, and a biscuit that morning at Horne’s. I found the omelette and hash browns to be generally acceptable, if a bit small in the case of the omelette and mushy in the case of the hash browns. I was really looking forward to the biscuit. As you might imagine, good southern style biscuits are tough to come by in Michigan, and I erroneously assumed that since I was in an ostensibly southern state, that the biscuit would be made from scratch in an antique cast iron oven by a tough old southern grandmother tucked in some back corner of the Circus Grill’s kitchen. I was wrong.

It was made from canned dough.

And it tasted like it had been reheated in a microwave.


I was suspicious when the top and bottom halves of the biscuit split cleanly and easily and the dry, bland flavor cemented my certainty that the Pillsbury Doughboy had more to do with the construction of this biscuit than anyone’s meemaw did.

Still, I like to assume the best about the places I visit. A little research reveals canned refrigerated biscuit dough was invented in 1931, and processed foods were new and even fashionable in the ‘50s and ‘60s. It’s therefore entirely possible that Horne’s has always slung prefabricated biscuits. On the other hand if I were to assume the worst, it could be that the offending dough puck is a recently-implemented cost cutting measure. A little more research revealed that in 2016, Horne’s changed ownership for the first time in 25 years. Could the new owners be cutting corners? Either explanation seems possible.

Regardless of the reason for the disappointing biscuit, it wasn’t enough to prevent me from buying a couple of Horne’s T-shirts and some Virginia toffee coated peanuts in the gift shop/convenience store area and taking a few minutes to appreciate the unspoiled vintage roadside architecture the building offered. It’s every bit and more the time capsule of a highway-adjacent eat-here-get-gas establishment as the former Nickerson Farms I visited in Ohio a few months back. Experiencing the building was more than worth the stop, and while decidedly mediocre, the food didn’t kill me. I might come back for lunch the next time I’m in the area, but I’ll stick to one of the Tudor’s Biscuit World locations West Virginia for my next biscuit craving, or maybe Suzi’s where I can get a Big Shef with my biscuit.

Posted by Zap Actionsdower at 9:45 PM