Scatter My Ashes at Darryl's 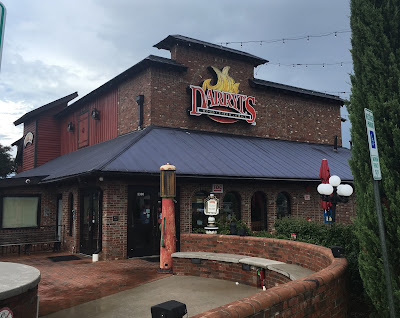 The blog post you are about to read is true. The names have been changed to protect the innocent. 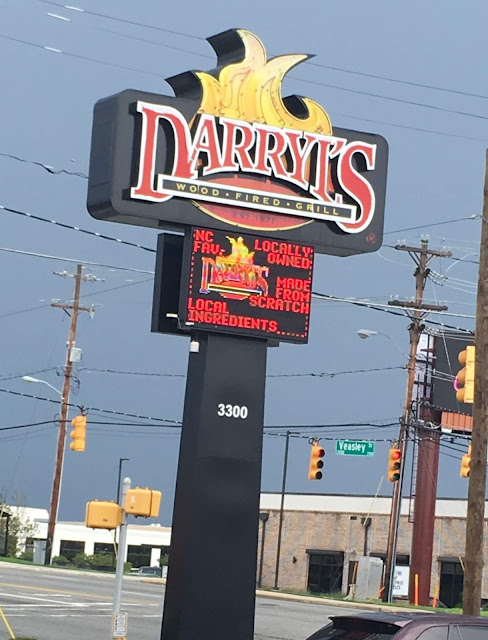 I’ve mentioned before that my parents courtship in the late 1970s was full of Broken Chain stories. Long before their Zantigo and York Steak House dates, my birth-givers, Herb and Judy Actionsdower, were simply work colleagues, think Pam and Jim in the first couple seasons of The Office. It was during that time that my mother was horrified to learn my father ate nearly every meal at the local Burger Queen, and thought that perhaps if he had a woman in his life, he might learn better eating habits. Naturally, she began setting him up on dates with her friends, roommates, and cousins. According to my father, none of the dates went especially well, until he and my mother became involved, but it was my father’s date with my mother’s cousin Agnes that got me thinking about Darryl’s.

The Lexington, Kentucky Darryl’s opened in early 1977 in an imposing, two-story building clad in raw wood with shuttered round-top windows. Its outward appearance simultaneously reminded a casual passerby of a Western saloon, French chateau, a dive bar, and a pirate ship. The interior of the restaurant housed a two story dining room with themed sections and innovative seating including booths in jail cells and antique elevator cars. The bar area housed an actual English double decker bus.

Having just opened, the new Lexington Darryl’s was the hottest dining spot in town, and seeking to impress, my father brought Agnes there for dinner, after which, according to my father, she ghosted him. My words, not his, but it was the 1970s equivalent of being ghosted to be sure. This doomed Darryl’s date was one of many between my father and women my mother set him up with that would eventually lead to my mother herself dating my father. Nearly 40 years later, my parents are still married, but the Lexington Darryl’s is long gone.

The Lexington Darryl’s closed in 2002, and served as a pop-up Halloween store for a couple of seasons before being bulldozed and replaced by a Walgreens. It was one of 36 locations across nine states, all of which were similarly over the top in interior design. The chain, was founded in the early 1970s by three partners, whom I sincerely hope were named Larry, Darryl, and Darryl, and arrived at the name of the restaurant democratically. Darryl’s would enjoy brief success before being passed between a series of increasingly neglectful parent companies, who forced the chain into bankruptcy in 1990 and 2002, eventually whittling the location count down to just one.

The Greensboro, North Carolina Darryl’s was rescued from obscurity by local businessman and lifelong Darryl’s fan Marty Kotis (his real name). Pains were taken to modernize the existing Darryl’s building and reintroduce original Darryl’s recipes. The new concept was dubbed Darryl’s Wood Fired Grill. While on a trip across North Carolina last week, I visited the Greensboro Darryl’s, because I can’t pass up a broken chain.

I wasn’t traveling alone. I was joined by my significant other, Esmeralda Fitzmonster, who previously had joined me on trips to the Joliet Rax, The Farm, Henry’s Hamburgers, and Mr. Quick. It’s mid afternoon on a weekday, and the place is dead. There are maybe ten other patrons in the building. I kind of prefer this, as there are fewer eyes on me while I’m semi-obnoxiously taking pictures of the dining area.

At our table, we await the arrival of our server, and watch as a waiter chats with an older couple at a nearby table for an uncomfortably long amount of time while we continued to wait. As time passed with no one coming to take our drink order, it became increasingly obvious that Chatsworth over there was our server as well. I take the opportunity to examine my surroundings.

Were in one of several themed sections in the dining area. The window shades seem to have old movie posters printed on them. The doorway to the bar area is adorned with a red velvet stage curtain, and a sign above the doorway to the drink station indicates it’s accessible to “cast members” only. There’s also a modern video projector hanging from the ceiling with a pull down screen in one of the windows by my table. This leads me to believe that they show movies here occasionally. It sounds like a novel idea, but I wonder how well it would work in practice in a noisy restaurant.

Chatsworth finally finds his way over to our table and takes our orders. I order barbecue chicken, and Esmeralda orders a wrap and some baked potato soup. We also order the pimento cheese and cracker appetizer for two reasons:

1. We’d been in the south for almost a week and hadn’t had any pimento cheese yet.
2. Darryl’s made from scratch crackers seem to be legendary among fans.


The crackers are large and irregularly shaped with a bit of seasoning. They’re similar to pita chips in texture, but not quite as hard. They pair nicely with the pimento cheese, which appears to have been made from scratch.

While we wait for the main course to arrive, I go exploring upstairs. I only ate at the Lexington Darryl’s once as a kid. Because I was in the grilled-cheese-and-chicken-finger demographic at the time, I don’t remember much about the food. My strongest memories are of the atmosphere. Just as I remember from childhood, the upper level of the restaurant was a labyrinthine collection of themed seating areas including a booth in an elevator, another in a replica of a Ferris wheel car, a jail themed area with celebrity mugshots and stainless steel tables, and a couple of booths with their own dedicated staircases leading up to them. Esmeralda noted that working as a server and carrying food up and down stairs would be a pain. I suspect there’s a service elevator hiding somewhere in the building. Also of note was the auxiliary unisex bathroom upstairs in the jail area which contained authentic prison-spec stainless fixtures. By the time I got back to the table, Chatsworth had delivered our food.

Esmeralda’s wrap was unconventionally seasoned,but not unpleasant, and my chicken was flavorful and indeed tasted as if it had been cooked on a wood fired grill. Speaking of fire, As we were dining, we noticed a tall plume is thick gray smoke rising from behind a gas station across the street. As soon as we became sufficiently concerned that calling the fire department became a topic of conversation, the smoke disappeared. It would reappear as we were leaving the building. Another employee overheard our conversation and offered the following:

“I know what the smoke is. Want me to tell you?”

“Sure!” One or both of us replied.

His face twisted into a mischievous grin and he replied, “It’s a crematorium!”

Upon hearing this tidbit, I’m not horrified. Maybe it’s the slightly spooky funhouse atmosphere at Darryl’s that also made it a fitting home for a Halloween store back in Lexington also served to desensitize me to the burning human remains across the street. Maybe it’s because I’m picturing the crematorium being run by a real life version of Mort the Mortician from Bob’s Burgers who walks across the street to Darryl’s for lunch with a real-life version of Teddy the handyman. Either way, it didn’t scare me away. I could see myself eating here again the next time I’m rolling down I-40.

I really enjoyed my meal at Darryl’s. I came in expecting to re live a little piece of my childhood, and that definitely happened. I was also pleased to find that the last remaining Darryl’s had been nicely evolved and modernized as a restaurant concept while retaining the elements that made it successful in the first place. I hope they can continue to survive and thrive. I’d love to see them make a comeback with more locations. Plus, The crematorium makes for a good anecdote, and if my father’s experience At Darryl’s is any indication of my future, I expect to marry one of Esmarelda’s cousins any day. 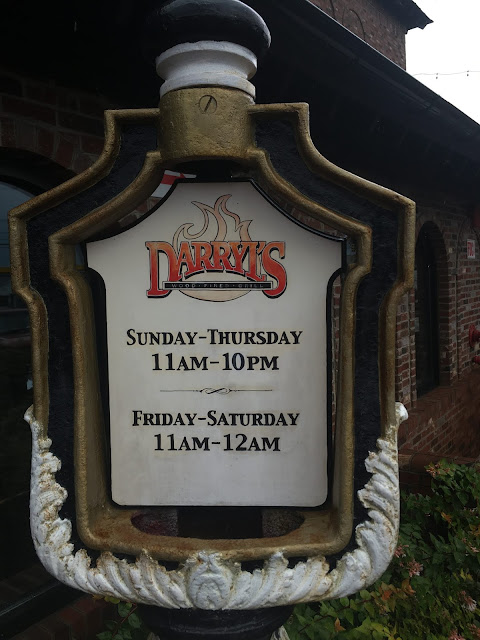 Posted by Zap Actionsdower at 6:32 PM