I went to Kentucky this past weekend, which means it's time for me to share with you more vague memories of my Kentucky childhood. One such memory is of a white plastic container with a blue lid, full of my coloring supplies including a mishmash of crayons from various Crayola boxes and restaurant activity place mat coloring kits. A few of those crayons had a distinctive scalloped pattern on the wrapper, and for some reason, I knew those crayons came from Jerry’s.

I have zero memories of eating at a Jerry’s restaurant as a kid, but I’m sure I did at some point. How else would I have had the crayons? I have more vague memories of travelling past their restaurants with gently sloping roofs and maroon signs with distinctive white lettering. I remember their pudgy chef character that bears more than a passing resemblance to Bob Wian’s Big Boy mascot. I would eventually learn that Jerry’s was the original brand of Jerome Lederer’s Jerrico Inc. that launched several restaurant concepts around Lexington, Kentucky, from the 1940s through the 1980s, the most successful of which were Long John Silver’s and Fazolis.

It was the early ‘90s when the Jerry’s around Lexington, and indeed the Jerry’s across the southern US, stretching from Florida to Arizona began to close up. Jerrico had divested itself of the Jerry’s and Fazolis brands to focus on Long John Silver’s, and all 46 of the surviving corporate-owned Jerry’s locations were bought up by Denny’s and converted to Denny’s locations. On trips around the Bluegrass State in the ensuing years, I’d occasionally see a franchised Jerry’s still open for business, often rebranded as Jerry’s J-Boy, but over the years, the J-Boys began to disappear. Near as I can tell, Jerrico ceased to exist as a corporate entity around the time of their sale of the Long John Silver's brand in 1999. Long John Silver's and Fazoli's are their legacy, but if you look hard, you'll find a handful of franchised Jerry's locations soldiering on independently, the last remnants of the early days of the Jerrico empire.

I found a surviving J-Boy by accident in Louisville on my trip to Ollie’s Trolley earlier this year and planned to have dinner there, but one thing led to another, and I ended up making a three hour round trip to Evansville, Indiana for a G.D Ritzy’s dinner instead. Later I discovered another Jerry’s in operation in Paris, Kentucky, and finding myself with a few spare hours on a weekend run to Lexington, I made plans to dine at both. 
The Jerry’s in Paris, Kentucky is among the first buildings you’ll see after arriving in Paris via Lexington on US 68. The twelve mile drive from Lexington’s north side takes you through the green rolling hills and wooden fences of the horse farms that seemingly occupy every rural road in central Kentucky. The original neon Jerry’s sign beckons you in off the road to a purpose-build 1961 vintage building. It’s a well preserved example of Jerry’s corporate architecture. With its gently sloping roof and windowed facade, it resembles a slightly larger Burger Chef of the same era. Next door is an independent pizza place that’s housed in a former Long John Silver’s, which makes me wonder if the owners of the Jerry’s also owned the franchise for the LJS as well since both were Jerrico brands. The inside of the building is a bit bland compared to the outside. It looks to have been renovated in the past 10 years or so, but the outside of the building is so nicely preserved that I don’t mind.

I walk in and a disembodied voice of some unseen employee tells me I can sit anywhere. It’s late on a Saturday morning and the place is busy. I’m by myself, so I take a seat at the counter. I had perused their website a few days before so I didn’t have to look at the menu for long. I ask my waitress for a J-Boy burger and fries. She asks if I’d like to add coleslaw to make it a platter, and I agree. I like coleslaw. She returns a minute later with a bowl of slaw and a soup cup containing wrapped crackers.

One of my favorite oddball Facebook pages is Coleslaw Review which rates restaurant coleslaw on a number of criteria including but not limited to, taste, texture, presentation, vegetable size, and liquid content. I think they’d like Jerry’s coleslaw. It’s a nice balance of sweet and sour with vegetables sliced just irregularly enough that you can tell it’s made from scratch.


The burger  arrived and confirmed my suspicions that were aroused by Jerry’s portly tray-carrying mascot. The J-Boy is a double decker burger with lettuce, pickles, a single slice of cheese and a mayonnaise based special sauce. It looks and tastes like a better quality version of a burger from Big Boy, specifically Frisch’s Big Boy.

(Bob Wian franchised his Big Boy burger to various regional master franchisees who would occasionally alter recipes to suit local tastes. Frisch’s Big Boy whose territory included the entire state of Kentucky used a mayonnaise based tartar sauce as the special sauce on their signature burger rather than Bob Wian’s signature red relish. Other regional master franchisees used a thousand island based sauce.)

The Big Boy burger, of course, has spawned countless imitators, including the Big Mac. Ram’s Horn, a local Detroit chain unpretentiously calls their double decker, special sauce burger The Famous Imitator. (Unlike in the Bible, Ram's Horn had nothing to do with the demise of Jerrico.) The Jerry’s J-Boy is one of the better double decker burgers I’ve had. It has all the flavors that a burger from Frisch’s has, but tastes fresher, meatier, and more balanced. Detroit-based Big Boy and Cincinnati-based Frisch’s Big Boy are run by completely separate corporate entities these days, and neither seem to be thriving. (The Detroit-based concern also owns the few remaining west coast Bob's Big Boy locations.) Both chains seem to be shrinking and have declined in quality in the past few years. I still visit locations of both chains regularly, and reserve the right to do a full Broken Chains post on them in the future. I don’t think I’ve had a burger at any Big Boy as good as the one I had at Jerry’s in at least a decade.


Jerry’s similarities to Frisch’s continued with the dessert course, which was a layer of vanilla ice cream encased between two layers of chocolate cake drenched in hot fudge and topped with whipped cream and a cherry. It looked and tasted just like Frisch’s fudge cake. Likewise, just behind where I was sitting, other patrons were enjoying a breakfast buffet, which is another fixture of most Big Boy locations on weekends. A news article I tracked down talked about a recently closed Jerry’s serving pie containing whole glazed strawberries, which is also a seasonal favorite at many Big Boy locations. Both Big Boy and Frisch’s predate Jerry’s, which makes me suspect Jerry’s was more influenced than Big Boy than the other way around. This isn’t exactly uncommon.

In addition to the Big Boy burger being widely imitated, and entire restaurant chains like Shoney’s and Eat ‘n Park are former Big Boy regional franchisees still operating very similarly to Big Boy in all but name. The difference with Jerry’s is that their parent company continued to innovate and went on to create original seafood and Italian fast food concepts in a time when both were uncommon. 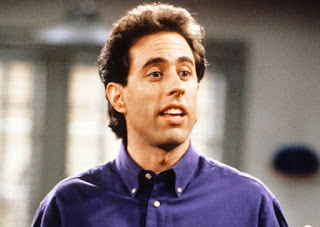 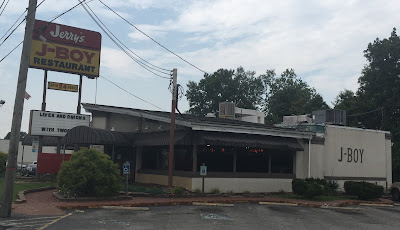 The Louisville Jerry’s building is situated on the busy Dixie Highway in a slightly rough feeling neighborhood on the city’s southwest side. It simultaneously feels newer and older than its relative in Paris. I’d guess the building is a 1970s construction that was last updated in the early ‘90s. Holdout franchisees seem to have adopted the J-Boy signage around this time. Elaborate awnings and brick walkways have been added to the otherwise nondescript building. Signage shows the later Jerry’s J-Boy name rather than simply Jerry’s. Signs are backlit plastic. If there was ever an outdoor neon sign here, it’s long gone.

Perhaps in order to compensate for the lack of neon outside, the interior of the Louisville Jerry’s has neon everywhere, with “Jerry’s, still the champ” spelled out on the wall behind the counter. I suspect the building was last updated around the time of the Denny’s buyout, at a time when places with a nostalgic theme were popular. Walls are adorned with images of Elvis Presley. There’s a life size Elvis statue by the door. I'm greeted with a "Can I help you?" from a surly hostess as I walk in. I inform her that I'm there to purchase and consume prepared food, and she begrudgingly shows me to a booth in the mostly empty dining area. 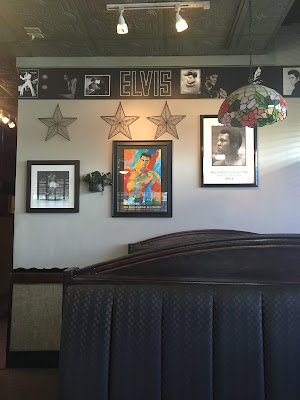 I examine the menu, and find it to be completely different than the Jerry’s menu I’d seen earlier that day in Paris. While the Paris location has separate double-sided single-page lunch and dinner menus, The Louisville location has a single multi-page menu, and serves all menu items 24 hours per day. The wall immediately across from my booth is adorned with several pictures of heavyweight champion and Louisville native Muhammad Ali in his prime. I’m not terribly hungry, having driven straight here from Paris. Perhaps inspired by Ali, or because it’s an item that I recognized from the menu at the Paris Jerry’s I order a sandwich known as a Champ.


Ironically, it’s a ham sandwich, which Muhammad Ali never would have eaten. It's served hot on a toasted sesame seed hoagie roll dressed with Swiss cheese, lettuce, tomato, and tartar sauce. It's pretty close in appearance and flavor to the sandwich that Frisch's calls a Buddy Boy. The other Big Boy chain has a similar sandwich called the Slim Jim. Like the J-Boy I had in Paris, it's better than any sandwich I've had at a Big Boy in recent memory. This location, while a little rough around the edges in terms of facility and staff, is still able to serve Big Boy inspired food better than any modern Big Boy is capable of. I think it's the consistently good food quality that keeps the holdout Jerry's franchisees in business nearly three decades after the end of support from Jerrico.

As is so often the case, the last Jerry's franchisees are also the best ones. The holdouts in Louisville and Paris, plus a handful of others, outlasted Jerrico, and may very well outlast the Big Boy brand that they began imitating in 1946. These days they're better at being Big Boy than either of the Big Boy chains are, and serve as monuments to Kentucky's lesser known fast food empire.
Posted by Zap Actionsdower at 6:21 PM