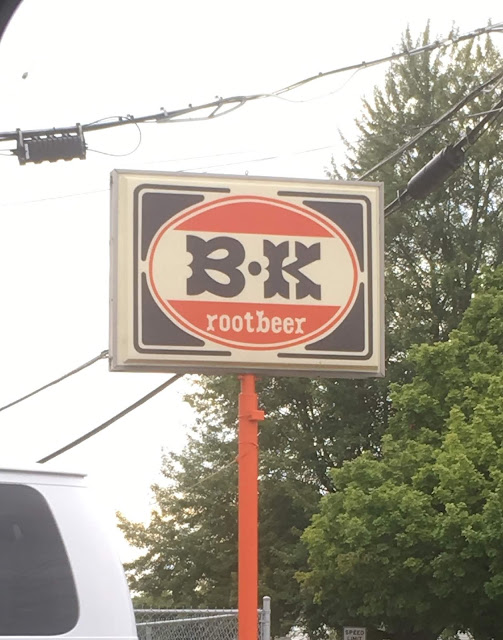 I spend a lot of time on I-75 in Ohio. It’s the quickest route between my home in Metro Detroit and my immediate family in Lexington, Kentucky. Over the past ten years, I’ve driven the 211.6 mile stretch of highway along the western edge of Ohio more times than I can remember. I can recite every exit with an amusing name, like Needmore Road, Botkins, and Luckey-Haskins, which when I drive by, always makes me think of actor Dennis Haskins who was indeed very lucky to land the role of Mr. Belding on Saved By the Bell. I-75 is a route I that until recently, I tried to complete as quickly and with as few stops as possible, never venturing more than a mile or so off the highway when I did stop. It’s only in the past few months that I realized how much Broken Chains fodder there was between Toledo and Cincinnati, often just another mile or two off the highway. I’ve previously visited the last operating Clancy’s, spitting distance from Exit 94 in Sidney, plus the three Kewpee locations in Lima, each of which are within five miles of Exit 125. On my most recent Kentucky run, I found that three of the 15 or so remaining B-K Root Beer drive-ins were all situated along I-75 in Ohio.

The first B-K Root Beer location opened in Michigan City, Indiana shortly after World War II. The initials B and K stood for the surnames of the founders, Melvin and Mary Bergerson and their partner, someone surnamed Kenefick, whose first name does not seem to appear anywhere on the internet, and may be lost to history. (Somewhere Keneflick is hanging out in a forgotten business partners' support group with Roebuck, and the McDonald brothers.) The two-initials-plus-root-beer nomenclature, was perhaps inspired by A&W which was founded nearly 25 years earlier, and the format of serving a proprietary recipe root beer in a drive in setting is also close to A&W’s early business model. I’m not sure that A&W pioneered this concept, or if someone came before them, but drive-in chains like Dog ‘n Suds and Frostop, as well as countless surviving independent drive ins across the Midwest all seem to function on the root beer-driven drive in model, each with their own distinctive root beer recipe.

At their peak, there were 238 B-K locations across the Midwest, but the increasing dominance of the national fast food chains in the 1970s brought about the decline of many drive-ins and regional chains, including B-K, who ended up under ownership of the Michigan-based DeNovo corporation in the ‘80s along with Dog ‘n Suds and Tastee Freez. DeNovo’s sale of the B-K trademark to Burger King for their then-new BK Broiler sandwich in the late 1980s was the final nail in the coffin for any corporate support for the final B-K franchisees. Wikipedia claims there are around 35 B-K locations left in operation, but my research only shows 15, all of which are in Ohio and Indiana. I suspect the Wikipedia estimate also includes locations that no longer use the B-K name, as I’ve run across a few of those. Given that the remaining B-K locations have been operating independently for 30 years, I was curious about what a still-operating B-K looked like and how consistent the locations were to each other. My most recent jaunt down I-75 afforded me the opportunity to visit three different B-K Root Beer drive-ins.

The Piqua B-K Root Beer location is made up of two buildings, the main building with a kitchen, small seating area, and a vintage canopy supported by bright orange V-shaped pillars and the "Patio" an open-sided pole barn next door which is used for additional seating. I opt to eat in my car. None of the B-K locations I visited had intercom systems. Instead, the carhop walked out to my car as soon as she saw me pull up. Slightly unprepared for the transaction, I ordered, and she returned a few minutes later with an antique metal tray that she attached to the partially lowered drivers' window of my car. I was under the impression that this style of tray was incompatible with the curved glass of most modern cars, but that didn't seem to be the case here.

B-K's food menu seems to revolve around hot dogs. Several hot dog toppings are offered at this B-K, but chili is not among them. The B-K stand-in for a chili dog seems to be the Spanish hot dog. It's the menu item I'm most excited to try, and I'm not disappointed. It's basically sloppy joe meat on top of a hot dog, but it's really good sloppy joe meat. The smoky, sweet, and tangy flavors are well balanced, and the pieces of meat in the sauce are quite small, making for a consistent texture that compliments the gentle snap of the steamed skinless hot dog below it. Copycat recipes I've found call for thoroughly stirring the sauce and raw ground beef to ensure the correct texture, similar to the Taco Tico meat recipe I attempted a few months back.


The onion rings are nothing special, pre-breaded, frozen rings from a bag deep fried, but the root beer float is baffling. It's a paper cup with root beer and a scoop of French vanilla ice cream. (I ordered a large, which comes in a paper cup, a medium comes in a mug. Your experience may vary depending on which B-K you visit.) The majority of the flavor in the float seems to come from the slowly melting ice cream. The whole mixture tastes of vanilla with a slight sassafras/wintergreen undertone. I made a mental note to try the root beer without ice cream before my journey was over.

As I'm leaving, I'm unsure of how to get the carhop's attention so she can remove my tray. I try turning on my car's headlights, and it worked perfectly. She came right out of the building, took my tray, and wished me well. After snapping a few pictures of the buildings as the staff and local patrons eyed me and my Michigan license plate with suspicion, I was on my way to my next destination.


The Troy B-K Root Beer is housed in a newer building, I'd guess a late '70s to early '80s build with a nondescript canopy and a larger dining area. This was my return trip, and I'd been sitting in the car for a lengthy amount of time thanks to heavy traffic around Florence, (Y'all) Kentucky. Because of this, I opted to eat inside. The very instant I picked a seat at the counter and sat down, another eager carhop/waitress, asked me for my order. I hastily order, noticing too late that this location had hamburgers. Unsurprisingly, my food arrived quickly. The fries were cut thick and well-cooked. I suspected they may have cut from potatoes on site, but further examination revealed their shapes and sizes were a bit too consistent for them to have been made from scratch. The peanut butter shake was blended in a vintage mixer right in front of me, and reminded me of the shakes I'd get at the vintage soda fountain of the old drugstore in the town were I grew up. The Spanish dog tasted exactly like the one I had a couple days earlier in Piqua, which was a pleasant surprise considering how little resemblance my surroundings bore to my previous B-K stop.


The dining area is decorated with various 1950s clichés including a vintage jukebox in one corner of the dining room that doesn't seem to be functional, at least not until Arthur Fonzarelli hits it. Antique branded root beer mugs line the shelves along the perimeter of the room, mostly from B-K, but I saw a couple A&W mugs in the mix as well. This restaurant seems to be the largest piece in someone's antique collection. This B-K serves regular beer as well as root beer, but not on the day I was there, as it was Sunday. Behind me, another employee was repeatedly trying to explain to an elderly and possibly already inebriated customer that local laws prevented them from selling alcohol on Sunday. Their point seems to be lost on him. This is more small town charm than I can handle, so I hop in my car and head for the next (and final) B-K.


The Sidney B-K is just a mile or so down the road from Clancy's. This location is less of a drive-in and more of a stand. There's no indoor seating, just a few picnic tables around the perimeter of the small building. It's located near some batting cages, and the sign by the road slyly advertises both businesses, using an alternate spelling. This feels the least like the remnant of a chain. The menu boards look to have been hand painted by an amateur, and the branding is minimal.

With each Spanish dog I consumed, I became more obsessed with them. It had been over an hour since I had eaten my last one in Troy, so I pretty much had to order two more in Sidney. The carhop, thankfully, seemed to be a little less intense than her counterparts at my last two B-K stops. The Spanish dogs were as tasty as ever. I also took advantage of my final opportunity of the trip to try their root beer. Sadly, I was not overly impressed with it. I generally enjoy trying different root beers and noting how the sassafras, butterscotch, vanilla, licorice, mint, and wintergreen flavors harmonize with one another. The proprietary root beer at Mike's Drive-In in West Frankfort, Illinois is a personal favorite, but Culver's root beer will suffice for me in a pinch. B-K's root beer didn't come close to either. It had little carbonation, no foamy head, and a one-note flavor that reminded me of chugging chilled mouthwash. It strikes me as root beer designed to be the base for a float. It needs the extra flavor from the ice cream to be palatable. Perhaps this was a built-in upsell strategy that had been there since the beginning, though that seems like a risky strategy for a place with root beer in their name.


It takes a little more gesticulating to get my carhop's attention here, but she eventually finds her way over to me and takes my tray. I can't say I'm a fan of the old fashioned drive-in trays. They lose their novelty quickly when you're worried about the weight of 22 ounces of mediocre root beer in a heavy glass mug supported only by the glass of your car's window, and you can't drive away until the carhop takes the tray. I'll stick to asking for my food to go on my next B-K run. I was glad when my car was again trayless so I could hop on I-75 at Exit 94 and head back home.

The B-K locations, that I visited seemed to be consistent to the brand where it counts, the food. While there were wild variations in the overall menus, signage, and architecture, the core items I sampled at multiple locations were consistent to one another. While the root beer was a bit of a let down, the Spanish dogs are my new favorite hot dog configuration. I'll be back to B-K for a Spanish dog or two the next time I'm travelling down I-75. I'll probably stop at the one in Troy. It's less than a mile off the interstate.
Posted by Zap Actionsdower at 6:35 AM