The Other Red Meat 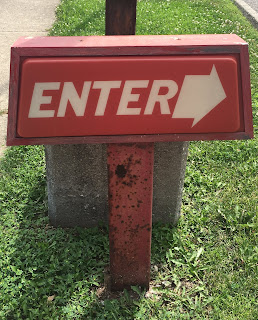 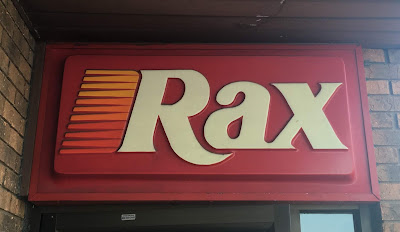 Ever notice that the mainstream fast food outlets occasionally introduce their own versions of menu items from their less successful competitors as limited time offerings? A couple years ago, Taco Bell introduced a “Taco Burrito,” basically a burrito-sized tortilla stuffed with taco fixins and no beans. It was suspiciously similar to the Sancho at Taco Tico. Hardee’s, whose parent company owns the rights to the long-defunct Burger Chef name periodically offers its own version of the Big Shef in certain markets, presumably to prevent anyone else from snatching up the Burger Chef name claiming it’s been abandoned. Recently, Arby’s has begun offering the Bacon Beef and Cheddar. While it is basically their normal Beef and Cheddar with their pepper bacon strips added, it’s also strikingly similar to the BBC (Beef Bacon Cheese), a longtime menu offering at Arby’s imitator and onetime national competitor, Rax.

I’ve been working on a piece on Rax off and on for months. Since April, I’ve been tweaking, but never publishing a post about them that playfully avoids mentioning Arby’s by name, but couldn’t help feeling like something was missing. I simply couldn’t see the appeal of Rax in its current state.

The first paragraph of the History section on the Wikipedia page for Rax Roast Beef is a baffling labyrinth of name changes and corporate acquisitions. Originating as Jax, Jack Roschman opened the first location opened in Springfield, Ohio in 1967, (three years after Arby’s opened their first location in Boardman, in the opposite corner of the Buckeye State.) Various corporate parents would change the name of the restaurant from Jax to Rix before landing on Rax in the early 1980s. Rax peaked in the 80s with over 500 locations in the US and Canada. It was during this period that Rax attempted to move upmarket and expand their offerings to include a salad bar and hot buffet items. The concept failed to catch on with Rax customers and started the slow decline of the chain.

The Rax website shows eight locations on their map, however two of those appear based on Google Maps information to be Long John Silver’s that also serve Rax items. (Long John Silver’s is quickly approaching broken chain status itself.) Another Rax has been “coming soon” for at least several months. By my count, that means there are five freestanding Rax locations open for business today, just 1% of the restaurants that were open in the chain’s heyday. In the past two days I’ve been to two of those locations. I’ve been to four of them total in the past 12 months. Most of the remaining Rax locations are in Ohio, and the three Ohio Rax I’ve visited all seem to operate similarly. There’s a limited menu of sandwiches, fries, baked potatoes and not much else at the Ohio Rax locations. Menu boards are modern, but cheaply made. They appear to be printed on foam poster boards that are simply placed over the old backlit menu boards. Though the Ironton location still has a buffet table in the dining area, it was empty when I was there, and looked like it hadn’t been used in a long time. The Circleville and Lancaster locations have no remaining signs of the salad bar ever existing.


I’ve never had what I would characterize as a good meal at an Ohio Rax. The stripped down menu is full of food that screams “Bootleg Arby’s” and it always came out tasting not terribly fresh and lukewarm. The buildings, (purpose-built Rax structures in Ironton and Lancaster, and a converted Wendy’s in Circleville) while generally clean had definitely seen better days, though the vintage architecture is charming. Each Ohio location was virtually empty on each of my visits, though I was usually there during mealtimes, leading me to believe the locals didn’t see any more appeal there than I did. The Rax experience, in general, felt generic and fell short of justifying the brand's continued, limited existence. My utter indifference to the Ohio Rax locations caused me to have a three month case of writers’ block, at least when it came to the subject of Rax.

Though the salad bar played a part in their ultimate downfall, I couldn’t help feeling like without visiting a location with a functional salad bar, a writeup on Rax would be incomplete. In the chain’s heyday, the Endless Salad Bar is what set Rax apart from its competitors. Wendy’s even borrowed the concept for their Superbar. A little research revealed that the only Rax locations with operational salad bars were also the only two operating restaurants outside of Ohio (Joliet, IL and Harlan, KY). I discovered this as I was planning a trip to a couple of places in southeast Wisconsin, so Joliet, being sort of on the way, won out over Harlan.
I eventually made it to the Harlan Rax as well. You can read about it here.

Having eaten at the mediocre Lancaster, Ohio Rax the day previous, I pulled into the Joliet, Illinois Rax for an early lunch. I was pleased to see a beautifully stocked salad bar at the front of the dining area, near the signature solarium. I ordered up a barbecue and cheese potato, a beverage, salad bar access, and a free roast beef sandwich because I had joined the astoundingly, still functional Rax text club the day previous. It turned out to be a lot of food, but not more than I could handle. I had previously discovered the Rax barbecue beef sandwich was a reasonable stand in for the hard to find Arby’s Arby-Q, and the same sauce-laden meat worked well as a potato topping. The salad bar was the main event here however. The typical salad ingredients were present as were a selection of fruits and desserts including strawberry shortcake and three kinds of pudding. The cup of cream of broccoli soup that came with my order tastes homemade. The broccoli is still slightly crisp. It clearly isn’t from a can. To my delight, everything needed to make fast food tacos was also present. The Rax taco meat had a taste and texture profile that was very similar to Taco Tico’s, and it’s a full two hours nearer to my front door than the nearest Taco Tico. On top of everything else, my roast beef sandwich was easily the best I’d ever had at a Rax. It was the perfect temperature and had more meat than any sandwich I’d had at an Ohio Rax. 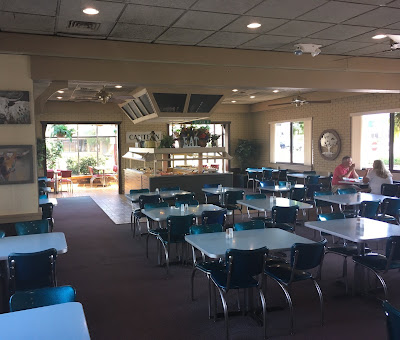 This location is easily the oldest Rax in operation. With its faux green slate Pizza Hut-like roof, I suspect the building dates back to Jax/Rix days. It seems to boast a nice blend of new and old. The menu board here is the original backlit unit, and though it shows its age a bit, I drastically prefer it to the cheap new menu boards in Ohio. The tables and chairs are reproduction midcentury pieces with a glitter finish on the vinyl chairs and a boomerang pattern on the tabletops, clearly not original, but thematically appropriate. Unilke newer Rax buildings, the solarium here has no shades covering the ceiling, so I’m able to eat my meal with a sky view. The employees are even wearing what seem to be vintage uniforms with the Rax logo on their shirts and visors. This is Rax the way it used to be. This is the working fast food museum I was looking for, but couldn’t find in Ohio. If you’re looking for a Broken Chains experience in the state that’s high in the middle and round on both ends, stop by Arthur Treacher’s, Clancy's, Kewpee, York Steak House, or the soon to open Columbus G.D. Ritzy’s. Wait until you’re west of Chicago (Or maybe in Eastern Kentucky, I still need to check out the Harlan Rax.) to try Rax. That’s where they truly do fast food with style. 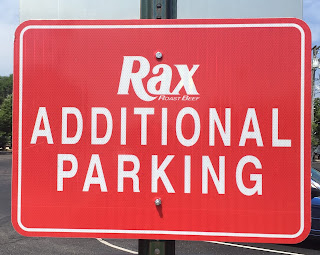 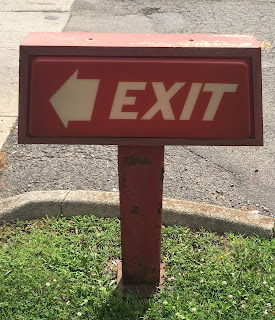 Posted by Zap Actionsdower at 10:51 PM