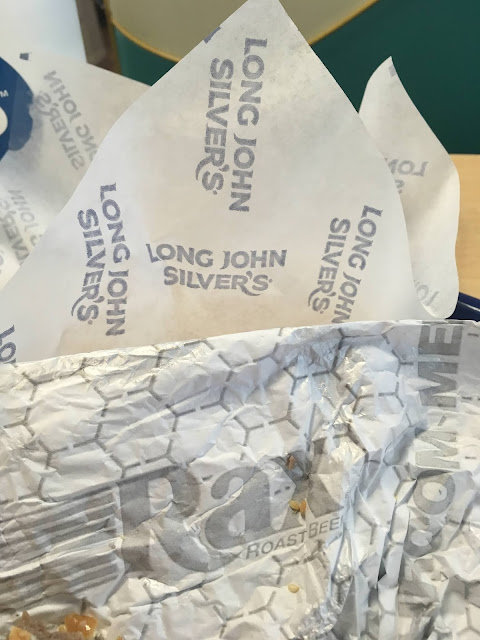 Lately, I’ve been keeping an eye on Long John Silver’s. I eat at lunch at one a couple times per month, just to see what they’re doing in attempt to attract new, younger customers. Back in 2011, Yum! brands, who owns KFC, Pizza Hut, and Taco Bell sold off its underperforming A&W and Long John Silver's brands to separate groups of franchisees of each respective brand. Since then, there have been new LJS logo and building designs implemented sporadically across the chain as well as new menu items additions like fish tacos, baked fish, and fried Twinkies. Seemingly all these changes are attempts to modernize what is a dated concept with an aging customer base. Still, with an active corporate parent and around 900 US locations, Long John Silver’s isn’t exactly what I’d consider a broken chain. The reason I’m discussing them at all is because of one franchisee who is attempting to increase the appeal of their location by incorporating a unique second franchise under the same roof. Our old friend Rax Roast Beef long ago lost its battle to remain relevant, but still maintains a handful of locations, mostly in Ohio. I discussed most of them at length a few posts back, but today I want to talk about just one Rax location.

If you’re not looking for the Rax in West Union, Ohio, chances are you’ll miss it. The owner of the West Union Long John Silvers Has found a way to haphazardly incorporate a Rax franchise, serving a limited menu, under one bright blue, cupola-adorned roof. The building is a typical 1980s Cape Cod style Long John Silvers with Yum! era updates. A much smaller Rax sign sits below the big yellow Long John Silver’s sign. That and vinyl Rax logos applied to the glass entrance and exit doors are the only hints that this aging seafood joint will also serve you a BBC and twisty fries.


Inside, it’s a typical 1980s vintage Long John Silver’s with early 2000s Yum! interior appointments. The one exception is a large square Rax menu board by the register supplementing the LJS board behind the counter. Though poorly incorporated, the Rax board is backlit and looks more modern and of higher quality than the cheap opaque boards at the other Ohio Rax locations. The full Long John Silver's menu is available, along with what I imagine are the most popular Rax items, including roast beef, turkey, and ham sandwiches, twisty fries, and baked potatoes. Redundant items like fish sandwiches and chicken tenders are missing from the Rax menu. Rax shakes are also nowhere to be found, which is kind of a shame. I'd be into a shake and shrimp combo.


There was previously a second Long John Silver's with a similarly incorporated Rax menu in Georgetown, Ohio, but it appears that location is now a Little Caesar’s, and only a Little Caesar’s. West Union, Ohio is therefore the only place where this odd surf and turf combination is available and I took full advantage. I stopped by for dinner one rainy Saturday evening and ordered up a regular Rax sandwich and a Long John Silver’s fried fish rhombus, plus some coleslaw, because I like coleslaw. The batter dipped diamond of processed fish tasted hot and reasonably fresh, and the roast beef sandwich was easily the best I’ve had at an Ohio Rax. It had a decent amount of meat that was nice and hot and beefy tasting, nearly as good as at the Rax in Joliet, Illinois. I had considered throwing the fish on the sandwich but decided against it when I noted its above average quality.


There are a few other odd touches here and there. A similar menu board is set up in the drive thru, and the employee working the speaker greets customers by saying, “Welcome to Long John Silver’s and Rax!” Its a truly unique fast food anomaly that I’m glad I could experience. Additionally, I can also now say I’ve been to every operating Rax in Ohio and every operating Rax period except for one. I'm coming for you Harlan, Kentucky Rax!

Posted by Zap Actionsdower at 10:08 PM