Throughout the year, I travel far and wide in search of places I can write about that fit the Broken Chains theme. Occasionally, however, I have experiences that don't quite warrant an entire blog post, so at the end of the year, I stick them together to create a single Katamari-like post about these minor experiences. It's an idea I lifted directly from the podcast, 99% Invisible, whose contributors put out an annual Mini Stories episode in late December every year. Just as Rax calls their Arby's-inspired curly fries twisty fries, I call my 99% Invisible-inspired mini stories post Tiny Narratives.

When coming up with topics to write about here, a well I return to frequently is chain restaurants of my youth that I haven't seen operating anywhere in a long time. More often than not, at least one location is operating somewhere. I pulled the name T.J. Cinnamons out of the recesses of my memory during a brainstorming session one day. The Cinnabon-like chain founded in 1985, the same year as Cinnabon, operated primarily out of shopping mall food court slots. Following a buyout by Arby's in 1996, T.J. Cinnamon's items began showing up on Arby's menus, and the mall-based locations began to disappear. Arby's bounced around to different parent companies during the past decade, and T.J. Cinnamon's got lost in the shuffle. The Wendy's Company owns the T.J. Cinnamon's brand now, but Arby's is owned by Roark Capital Group, who also owns Cinnabon. Wendy's seems to be doing nothing with the brand, and Cinnabon menu items haven't made it into Arby's yet. Meanwhile, T.J. Cinnamon's seems to be all but a dead brand. It has no website or social media pages, and a list of locations is nowhere to be found online.

Still, I suspected there was at least one Arby's still selling T.J. Cinnamons cinnamon rolls, and I was determined to find it. Some Googling revealed that a few Arby's locations in the Morgantown, West Virginia area were still listed as T.J. Cinnamon's locations, and while in the area, I stopped by one of them to investigate.


Upon arrival, in Morgantown, I found a fairly standard Arby's with no T.J. Cinnamons signage, and no cinnamon rolls on the menu. I ordered a chocolate shake in defeat, but not before noticing photos by the counter of kids' baseball teams that the local Arby's franchisee had sponsored. Some photos listed Arby's as a sponsor, while others listed T.J. Cinnamon's. Based on these photos, this Arby's had been selling T.J. Cinnamons items at least as recently as 2008, and perhaps later.

I can't help but think that T.J. Cinnamons is extinct however. I doubt any Arby's franchisee is able to procure whatever proprietary prefab dough product the T.J. Cinnamons brand used, nor is any Arby's franchisee willing to have their employees make a facsimile of a T.J. Cinnamon's cinnamon roll from scratch. Still, there's an Arby's in Albuquerque that's listed as still being a T.J. Cinnamons location. My Broken Chains-related travel hasn't taken me west of Tornado Alley yet, but if I do ever find myself exploring the broken chains of the Land of Enchantment, I'll plan a stop at that Albuquerque Arby's on the off chance it's also the world's last T.J. Cinnamon's. 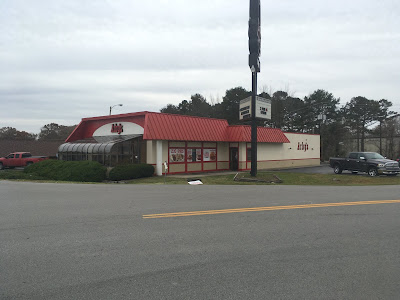 While we're on the subject of Arby's, let's talk about this one in Corbin, Kentucky. You may recall that I encountered it last year on the way home from the very first Raxgiving at the Harlan, Kentucky Rax. I mentioned in that post that this Arby's is a former Rax. That turned out to be incorrect. The Raxgiving event I put together this year caught the attention of the owner of the Harlan Rax, who kindly informed me that this Arby's had always been an Arby's, and he knew that to be the case, as his original Rax franchise agreement included exclusive rights to operate in Corbin. No one else could open a Rax there, and neither did he. He did mention, however, that Rax architecture may have influenced the design of this particular Arby's location. Sadly, this Arby's has since been closed, and I believe demolished following the construction of a new Arby's just up the road.

I'd Rather Sonic, Wouldn't You?

Admittedly, this year's Tiny Narratives is Arby's/Rax-heavy. I swear I didn't plan it that way. At one point during the year, I had plans to write a post documenting former Rax buildings I had encountered. That post didn't come to fruition for a variety of reasons, but in researching it, I did encounter a fast food architectural oddity too weird to not mention. 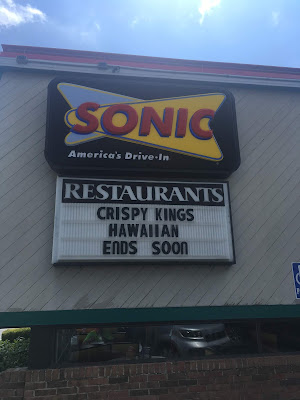 Athens, Ohio is home to a bizarre carhop-less Sonic location that's housed in a former Rax building. Furthermore, it's a relatively uncommon variation on the Rax design that features a solarium on one side of the dining room rather than protruding out the front. In Sonic guise, the old Rax originally featured phones at each table from which customers could place orders, but during my visit over the summer, the phones had been removed, forcing patrons to awkwardly order from a tiny menu board next to a similarly diminutive order counter.

There's not much more to say about Rax-Sonic other than, "Weird, right?" so this oddball Sonic ended up in the Tiny Narratives file.


There Once Was a Mascot From Nantucket... 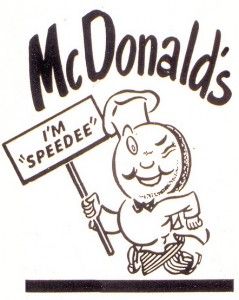 If you're reading this blog, you're probably more familiar with legacy fast food mascots than the average person. You're also likely to recognize Speedee, the original McDonald's mascot who predates Ronald by a solid 15 years. Following my post commenting on the similarities between the Ritzee Hamburgs and G.D. Ritzy's mascots, Sef "Burger Beast" Gonzalez reached out to me regarding a near forgotten mascot that appears to have inspired Speedee.

Meet Downyflake Dan, mascot for Downyflake Donuts, who according to Sef's research appeared in newspapers as early as 1947 while Richard and Maurice McDonald didn't begin using Speedee as the mascot for their revamped burger stand using the Speedee System until 1948. As you can see, the only significant difference between Downyflake Dan and Speedee is that their large round craniums are made of a donut and a hamburger, respectively. Is this a case of plagiarism, or both companies using an ad agency with a lazy art director? The answer to that question seems to be lost to history.

There's still a Downyflake in operation in (on?) Nantucket, Massachusetts, but they haven't returned my emails regarding their mascot. Maybe they don't know anything about it. My Broken Chains travels haven't taken me too far up the east coast, but if I'm ever in Nantucket, I'll stop in at the Downyflake and ask about Dan.

To my complete surprise, Kmart still exists. Sure, after the latest round of store closures set to wrap up in February, there will only be 59 US locations left, scattered haphazardly across multiple non-contiguous American states and territories. And sure, those locations are by and large as dated and dilapidated as the stores that have closed before them. And sure, Kmarts corporate sibling Sears isn't fairing much better, and will soon be down to 111 total US locations according to the handy map of surviving locations put together by Dead and Dying Retail, but any other retailer in Sears/Kmart's position would have called it quits years ago.

According to at least one commentator, there's no real business case for keeping Sears and Kmart in business, and the only reason they still exist is to nurse the bruised ego of their one-time CEO and current majority shareholder Eddie Lampert, whose pattern of mismanagement and apparent strategy of slowly stripping both brands for parts has forced both Sears and Kmart into a hyperbolic function of constantly approaching, but never reaching the point of complete liquidation. I can't help but suspect I'll be writing about some smaller, yet still extant remnant of the Kmart chain next year as well as Sears and Kmart continue to shamble irrelevantly through the increasingly bleak brick and mortar landscape.

As with last year's Tiny Narratives post, I'll wrap this post up with pictures of Kmart locations I've visited this year. Unless otherwise noted, all locations shown have closed or are in the process of closing.

Posted by Zap Actionsdower at 11:19 AM