Behind Every Great (Minute) Man... 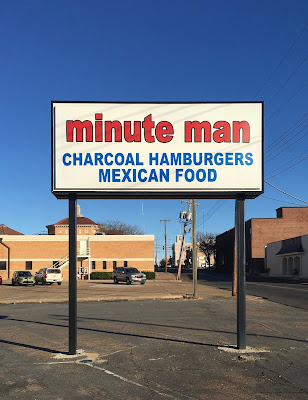 When I’m out adventuring, and come to think of it, when I’m living my life in general, quirks of my personality motivate me toward a goal of having complete anonymity. It’s a strategy that has lead me, in my capacity as a documentarian of endangered restaurant chains, to write mainly about the food, building, and overall experience associated with a restaurant, and not about the people behind it. Getting to know the owners and employees of a place I write about adds a level of socializing that, when repeated during every restaurant visit, would quickly diminish the level of fun I have in my travels. This blog is my hobby after all, it should be fun. An exchange with the people who run the places I write about would also add a layer of logistics and complexity when planning trips. I’d either have to call places in advance to set up interviews, or try to visit during off-peak times when owners and staff might have time to chat, and that’s assuming they’d even be interested in talking to me in the first place. This desire for anonymity and ease of experiencing surviving locations of mostly defunct restaurant chains has led me to simply showing up, eating, semi-discreetly taking a few pictures, and moving on to write about my experience later. It’s a process I’ve settled into over the past couple of years, and is a contributing factor to my oft-repeated self-criticism that I’m too much of a restaurant critic, and not enough of a historian.

I occasionally find myself with a desire to open a dialog with the people behind the places I write about, in the pursuit of becoming more of a historian than I am. That’s what George Motz, the world-renowned hamburger scholar seems to do when he’s on the road experiencing historic burger joints, but I lack Mr. Motz’s level of fame and I wager that he’s more outgoing than I am. In most cases, I’m eager to tell people about my hobby or what I’m doing eating at a near forgotten restaurant in some far-away town, but I’m unsure how to bring it up, so the cycle of anonymity continues. I was mulling all of this over a few weeks ago on the long drive to Arkansas from my Metro Detroit home, but little did I know that my visit to the last operating Minute Man restaurant would break that cycle.


The first Minuteman opened in Little Rock in 1948 as a 24 hour coffee shop, but the fast food craze of the 1950s, motivated Wes Hall, one of the owners of the Minute Man coffee shop to buy out his partners and convert the restaurant to a fast food concept in 1956. The single location grew to a chain of franchised and company owned locations, peaking around 57 locations in Arkansas and surrounding states sometime in the ‘60s and ‘70s. Hall left the company in 1981, and the chain slowly shrank to the single location that remains open today in El Dorado, Arkansas. (Locals pronounce “El Dorado” so that it rhymes with “Well, Alfredo,” which rumor has it, is how Ronald Reagan would address his favorite pasta dish. For the non-Americans reading this, “Arkansas” is pronounced like Noah’s big boat and the cutting implement he presumably would have used while building it, “Ark-an’-saw.”)

I found my way to El Dorado on a quiet Friday afternoon, and headed straight to the world’s last surviving Minute Man, which is housed in a low brick building with a midcentury modern flair, sitting diagonally on a lot on Main Street. I parked near the door, and found my way inside where I was greeted by a woman working the only cash register, situated in front of an imposing indoor charcoal grill, a unique feature in the fast food world. She gestured out the window, toward the posterior of my car, which sported a Michigan license plate and asked where I was from. When I told her I was visiting from Detroit, she followed up wanting to know what brought me to El Dorado. It was in that instance that my desire to talk about my hobby and silly blog outweighed my desire for anonymity, and I replied that I had driven all the way from The Motor City to eat at Minute Man. I explained my hobby and blog, which seemed to delight the cashier, who I quickly learned was Linda McGoogan, longtime owner of the El Dorado Minute Man. Miss Linda became increasingly inquisitive about my blog and the places I had been, and we chatted about my adventures as she took my order, which included a seemingly Big Boy-inspired Big M burger, a taco, chips and cheese dip, and a drink known as Mexican Punch. Unfortunately, I learned that the El Dorado Minute Man no longer serves the apple and cherry pies associated with the chain, which had the dubious distinction of being among the first restaurant foods to be prepared using a microwave.

After ordering, I ran out to my car to retrieve the vintage Minute Man cup gifted to me by Carl Poncherello and some Broken Chains stickers to give to Miss Linda and her lone employee who was preparing my meal. I didn’t catch his name, but he had dark hair and a mustache, and because of that, and the fact that he works in a restaurant with an outgoing woman named Linda, I’ll call him Bob. I headed back in to hand out stickers, and show Miss Linda my cup, which she said predated her 40 year tenure with Minute Man, and before too long, Bob brought my order up to the counter. I was delighted to see my food was placed on a plastic tray that didn’t look much newer than my Minute Man cup. A Minute Man logo had been printed on the tray, likely sometime before my birth. A stack of trays just like it sat on the counter, meaning that the rare fast food artifacts still got regular use.


I thanked Bob for preparing and delivering my meal, and dug in, beginning with the taco, which I’m proud to report is my new second favorite fast food taco, second only to Taco Tico. The meat was seasoned with a unique blend that has a complex and slightly spicy flavor profile that’s not unlike pastrami. It was perfectly complemented by the tiny plastic cup of hot sauce served with the taco. The cheese dip, which I later learned is a regional specialty strongly associated with the state of Arkansas, was unlike any other nacho cheese I’ve ever experienced. It was more orange than the bright yellow stuff that you see at convenience stores and sporting events. Likewise, it was thinner than I expected, just thick enough to coat one of the round tortilla chips it was served with. Also unlike the ubiquitous fluorescent cheese product I’ve encountered in the past, Minute Man’s cheese dip actually tasted like cheese, punctuated by just enough heat to let you know that it’s more than just a generic cheese sauce. The Mexican punch was regular red-flavor fruit punch, which was a welcome, if not distinctive, addition to the meal. I was two bites into the Big M burger when Miss Linda called me over to the counter. She’d called up her business partner, Perry Smith so he could say hello to me. The two of them are in the process of opening three new Minute Man locations spread between Little Rock and Conway, Arkansas. I love a good broken chain comeback story, so I told Perry I’d have to return to Arkansas once the new locations were up and running. The Minute Man Memories Facebook page seems to be a good source for news about the upcoming locations as well as general Minute Man content.

After speaking to Perry, I returned to my table. As I finished my Big M burger, I found myself craving more of the uniquely seasoned tacos, so I ordered two more from Miss Linda, and made small talk with a couple other patrons, who by that time had overheard my explanation of my silly hobby visiting surviving locations of defunct and diminished restaurant chains. I was simultaneously in my element, experiencing the lone survivor of an otherwise defunct chain, and out of my element as the center of attention for the restaurants staff and other customers, yet I found myself to be oddly comfortable sharing stories of my adventures to interested strangers. The experience I had, thanks to Miss Linda's warm welcome and keen interest, taught me that, at least under near-ideal circumstances, giving up some anonymity and being the center of attention isn’t such a bad thing. It also made me wish I had been a little more open about myself when I met the owners of the last Wiener King and the Lima, Ohio Western Sizzlin. Moving forward, I’ll try and introduce myself to restaurant owners and staff, at least when the situation seems to warrant it.

Posted by Zap Actionsdower at 5:53 PM