Pay as You Exit 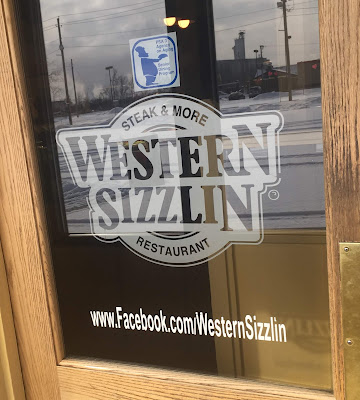 Imagine you’re running a dated, but still thriving chain restaurant in a small town, and a lone weirdo comes in for lunch. He thinks he’s being sneaky taking pictures of signs, menus, the dining room, and his food with his phone, but he’s not. He takes forever to order, and is way too excited about the seemingly mundane signs and decor of your business. After generally making a spectacle of himself for the duration of his meal, this solitary eccentric proceeds to leave the restaurant without paying, snapping a picture of the door on his way out. Would you be annoyed? Would you call the cops? Had I been the manager of the Western Sizzlin’ in Lima, Ohio, the answer to both of those questions would probably be yes. Few of you will be surprised to learn I was not the restaurant manager, and that in fact, I was, am, and always will be the weirdo.

Western Sizzlin’ is a chain that has special meaning to me. During my Central Kentucky Childhood, my cousin Fifi Actionsdower worked as a waitress at the local Western Sizzlin. As a result, every celebratory family dinner would be had there, and we’d always ask to be seated in Fifi’s section presumably so my father, Aunt Sis (of G.D. Ritzy’s fame), and Granny Nova Scotia Actionsdower, could each leave Fifi a generous tip. As a kid, I loved going there. The salad bar had unlimited tiny ham cubes. (We called them ham boxes in my family.) There was fried chicken on the buffet, and the dessert bar was every kid’s dream, with a soft serve machine you could operate yourself and a topping bar that included gummy bears. Even when the adults lingered long after the meal to discuss their various boring adult topics at length, I didn’t mind. I kept going back to the dessert bar and constructing increasingly elaborate soft serve creations. Some were even topped with ham boxes. The magic didn’t last forever, though. Our local Western Sizzlin’ closed in the early 2000s, and I’d go more than 15 years without eating at another one.

Nicholas Pascarella opened the first Western Sizzlin’ in Augusta, Georgia in 1962. According to company folklore, Pascarella’s vehicle suffered a flat tire while he was out scouting locations to open his restaurant, and that Pascarella was convinced by employees at the tire shop repairing the flat that he should open for business in Augusta. The business grew to a regional chain under Pascarella’s management, peaking at around 350 locations. Nicholas Pascarella died in 1988, and the business was sold to Pizza Hut cofounder Frank Carney, and promptly entered chapter 11 bankruptcy. Since emerging from bankruptcy, the Western Sizzlin’ brand has changed ownership multiple times and is currently owned by Biglari Holdings, the same company that’s currently running Steak ‘n Shake into the ground. There are around 52 Western Sizzlin’ locations open today, mostly in the southeastern U.S.

I was not overly optimistic as I made my way down I-75 to the northernmost surviving Western Sizzlin’ in Lima, Ohio. Chains that still have a corporate parent involved tend to be a mixed bag, but Uncle Alligator, the patron deity of endangered chain restaurants, was smiling a big toothy ‘gator grin on me that day and sent me a good omen.

On any other ten degree day, this would have been annoying, but I was on my way to a location of a restaurant chain that began with a flat tire. Clearly this was a good sign. I hopped off the interstate and aired up my tires at a gas station. I confirmed that I had indeed been blessed with a nail in my right rear tire. Gambling that the leak was slow enough that it wouldn’t cause me significant problems, I opted not to put the spare on, and continued with my trip, arriving at the Lima Western Sizzlin’ a short while later.

I was pleased to find the building housing the restaurant largely unmodified since its construction in 1978, resembling a long, low ranch house with big windows and dark green trim. It appeared exactly as the Western Sizzlin’ of my childhood did. Upon entering, the interior of the building completed the time travel that the exterior began. The layout and decor of the inside of the place were just as I remembered. Even the same coin operated machines were present in the entryway. It felt like the beginning of a family birthday dinner in 1996 as I snaked my way around the perimeter of the dining room in the corridor designed to handle a line of hungry diners. I found my way to the order counter, and after taking a few moments to be indecisive, ordered up a petite sirloin with a baked potato and a trip to the salad bar. I promised myself I’d stop in on my return trip the following day to sample the bounty of the buffet and make myself a ham box sundae for nostalgia’s sake.


I took my tray and headed to my table with a minor nagging thought that I had forgotten something. Had the employee running the order counter run my credit card? Surely she must have. I even had a receipt right there on my tray. I selected a booth in a roughly equivalent spot to the area in which my family would sit at our Western Sizzlin’ in my youth, and headed to the salad bar, determined to sample as much as I could. I loaded my salad plate up with a variety of salad bar offerings, all of which were perfectly fresh and tasty. The potato salad really stood out, as it appeared to have been made with mashed potatoes. Maybe it’s their way of using leftover mashed spuds, but I found the presentation novel, and even preferential to conventional potato salad.

Upon my return to my table, I found my tray had been removed, and replaced with a steakhouse trope, namely a basket of yeast rolls with cinnamon butter. They’re a trope for a reason, though, and that reason is deliciousness. I was halfway through my second roll when my steak arrived. I’ve said before that steak is tough to mess up, and this steak was decidedly not messed up. Western Sizzlin’ sears the top of the steak as well as the bottom as it cooks, and refers to steaks cooked using this process as FlameKist™ steaks. I don’t know that the FlameKissing™ process had a noticeable effect, but as sirloins go, this one was more tender and flavorful than average. The potato was nicely cooked, and whoever had prepared it did that thing where they cut the top of the potato and squeeze the ends together so fluffy potato guts spill out. I like it when they do that thing. As if I hadn’t eaten enough starches, my steak came with a piece of buttered Texas Toast, which I must admit wasn’t entirely unwelcome.


Upon finishing my meal and attempting to discreetly take a few more pictures, I took my leave, and walked across the parking lot to my van where I was entering my next destination into my GPS, when a man waved outside my window attempting to get my attention. I cautiously opened my window a crack to see what he wanted. When he informed me I had failed to pay for my meal, it immediately made sense in retrospect. I definitely didn’t remember paying when I had ordered, and what I thought was my receipt was actually a bill, which I should have paid on the way out. Embarrassed, I quickly followed my pursuer back into the restaurant, feeling grateful that he had dealt with the misunderstanding in such a gracious manner. He explained that people paid on the way out so that pricing adjustments could be made if they had any complaints, and that he had noticed I was taking pictures inside and figured I was from out of town and therefore unfamiliar with the process. He wasn’t wrong, but I was also mortified he noticed me attempting to document the undisturbed interior of the restaurant. I’m always a little self-conscious when I’m taking pictures in public, and I make efforts to maintain a low profile when I do. To have been noticed geeking out over an old steakhouse, and forgetting to pay my bill made me more self conscious about my natural awkwardness than usual. Luckily my benevolent pursuer didn’t mind any of this too much, and when I attempted to explain myself by saying I hadn’t been to a Western Sizzlin’ in 15 years, and I had happy childhood memories associated with the brand, he opened up, stating that he had gotten his start with Western Sizzlin’ decades ago washing dishes and that he sees a lot of nostalgic patrons coming through. Based on this conversation, I took him to be the owner of the place, and as such he surely had a good deal of experience dealing with weirdos like me.


Awkward moments aside, I had a great meal at Western Sizzlin. I once remarked that my sad dilapidated local Ponderosa would quickly close if a Golden Corral opened across the street, but the Lima Western Sizzlin’ is literally across the street from a Golden Corral, and still manages to not only survive, but thrive. The building is outdated in the best sense of the word, and is clean and nicely maintained. The food was well above average quality, and it goes without saying that the staff was more than courteous. The value for money was good too. When I finally did pay my bill, it was under $15, a pretty great value considering all I got. I would say that I plan on returning soon, but the whole forgetting to pay thing was sufficiently embarassing that I didn’t make it back for the buffet on my return trip. My entirely reasonable level of social anxiety will probably keep me away from the Lima Western Sizzlin’ for a couple months, but I’ll be back eventually. You, the reader, should check it (and Kewpee) out too if you’re ever in the area. Just remember to pay as you exit. 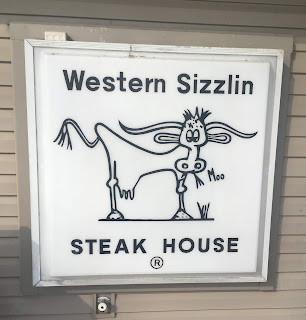 Posted by Zap Actionsdower at 2:41 PM