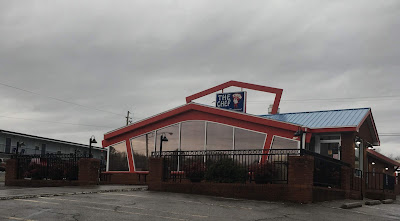 In a couple of weeks, I'll have been travelling in pursuit of broken chain experiences for a full year. In that year, I've made some unexpected discoveries that I found truly surprising. The outlets of otherwise extinct, or at least rapidly disappearing chains I thought I'd never have the opportunity to visit make me constantly recall the title of my very first blog post. With every holdout business I stumble upon with help from my loyal readers and Google, I repeat it like a mantra.

You'd be surprised at what still exists.

I've consistently been surprised and impressed with the places that are still open for business as usual, decades after the majority of their sister locations have closed up shop. Just when I think I've discovered everything within a reasonable driving distance, I turn over more rocks and find more places that call to me with the siren song of obsolescence.


Over the summer, I visited a place called Suzi's Hamburgers located in South Charleston, West Virginia, and found it to be a relatively faithful recreation of a mid 1970s Burger Chef including operating out of an era-appropriate Burger Chef building. I had previously assumed Burger Chef to be completely extinct. In my excitement, I composed a blog post that, in retrospect, I realize discusses the history of the chain a bit too much, and my experience at that specific location not quite enough. A few months later, to my ever-increasing surprise, I would be afforded a second chance to write about Burger Chef.


While I was in the Volunteer State visiting Central Park locations, I found myself in Cleveland, Tennessee, a town whose Central Park is situated just around the corner from a restaurant called The Chef. I had known about The Chef for years thanks to the building's familiar pentagonal front facade, and cryptic posts about it on old Burger Chef fan sites. While the building is a 1966 vintage Burger Chef structure, and the name of the restaurant's name evokes the building's original purpose, I couldn't find any evidence on any website of it having anything resembling Burger Chef food. Through the lens of Yelp or Google, it looks like a generally well-regarded breakfast and lunch joint operating out of an old Burger Chef building. I figured I'd stop by for an early lunch on my way out of town just to check the building out. I didn't hold out much hope for the menu to retain any Burger Chef items. However, I was pleasantly surprised to find that I was wrong, and that much of the lunch menu was true to not only Burger Chef, but the era of Burger Chef in which the building was constructed. 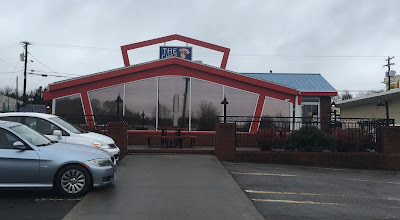 It's at this point that should probably provide you with a little history. I'll try my best to keep it brief. Burger Chef was founded in the early 1950s as a subsidiary of a restaurant equipment company based in Indianapolis. The chain grew quickly by franchising during the postwar fast food boom, eventually becoming the #2 fast food chain behind McDonalds. Cashflow issues led to Burger Chef being acquired by General Foods in 1968. Lacking experience in the restaurant business, General Foods implemented sweeping changes across the chain with mixed results. (They also owned, and similarly mismanaged Rax and Ponderosa around the same time.) Building designs were updated. Marketing strategies and logos changed frequently. In the 1970's a Roy Rogers style topping bar was added, and flame broilers were discarded in favor of electric griddles. General Foods' mismanagement of Burger Chef led to Hardee's acquiring the brand in 1982, and quickly converting corporate-owned Burger Chef locations to Hardee's locations. The few remaining franchised Burger Chefs closed up shop over the next 14 years as franchise agreements were allowed to expire. The last restaurant to use the Burger Chef name closed in 1996. Fans of the chain regarded Schroeder's Drive-In in Danville, Illinois, a Burger Chef that changed its name, but not its operations when its franchise agreement expired, as the last true Burger Chef. Sadly Schroeder's closed in 2015.

In present-day West Virginia, Suzi's is probably best known for it's various breakfast biscuit sandwiches that rival Tudor's Biscuit World, West Virginia's homegrown chain, known for all things biscuit-related, but their lunch menu is the closest thing to the 1970s iteration of the Burger Chef menu that you'll be likely to find anywhere. Hamburgers are cooked on an electric griddle, and are prepared and topped as they would have been in the Burger Chef days. Close analogs of later menu additions like the Chicken Club sandwich and Fisherman's Fillet are available. The topping bar is present in the lobby, and appears to be an original Burger Chef unit. In fact most everything about the building is '70s era Burger Chef, including not only the structure itself, but the indoor and drive thru menu boards. In my mind it's less a fast food joint, and more a fast food museum, a glimpse into the past to an era when Burger Chef was still a major force in the fast food industry, but was clearly in decline, and trying desperately to reinvent the concept to stay relevant in an industry where its market share was shrinking.

If Suzi's is the best surviving example of a 1970s era Burger Chef, then The Chef is easily the best surviving example of a 1960s era Burger Chef. It's building has had some updates over the years, but all the trappings of a second-generation Burger Chef building, known internally as a "Cosmopolitan II" design, which retains the basic shape of the earlier Burger Chef building design, but adds an L-shaped indoor dining room flanking the kitchen. I stopped by during the transition from breakfast to lunch on a weekday. The original Burger Chef menu boards are long gone here, and have been replaced with a couple of flatscreen monitors. I ordered a drink and sat in the lobby, staring intently at the menu screens until they changed over from breakfast to lunch. After taking a minute to parse the names of the burgers in an effort to determine what Burger Chef items they might bear similarity to, I returned to the order counter and requested what the menu called a Big Deluxe and a Super Deluxe, suspecting the words "Big" and "Super" might indicate they are copycats of the Big Shef and Super Shef, which were fixtures of the Burger Chef menu.

Within a few minutes, my order was ready, and with cautious optimism, I unwrapped the first sandwich. Sure enough, it was a double deck burger on a three-piece bun with a pair of two-ish ounce patties, a single slice of cheese, shredded lettuce, and a chunky white sauce. It was a renamed Big Shef, Burger Chef's knockoff of Bob Wian's Big Boy, which beat McDonald's knockoff, the Big Mac, to market. My first bite confirms the sandwich's true identity. As with the Big Shef I had at Suzi's, (They call theirs the Double Decker.) the sauce had the unmistakably tangy zip of Miracle Whip, which served as the base for the special sauce Burger Chef put on the Big Shef. Unlike Suzi's however, this Big Shef had the flavor of the 1960s, as the patties had been cooked in a flame broiler as they would have prior to the General Foods era. You've gotta love food that's era-appropriate to the building. If Suzi's is the 1970's exhibit in a hypothetical Burger Chef museum, The Chef is its 1960s counterpart.


I then gave my Super Deluxe, aka Super Shef a try. This is my first Super Shef, as I usually opt for a Chicken Club of Fisherman's Fillet as my second sandwich in addition to my customary Big Shef when I visit Suzi's. The original Super Shef was a deluxe burger with all the typical toppings garnishing a quarter-pound patty, essentially, Burger Chef's answer to Burger King's Whopper. Unsurprisingly, with it's flame broiled patty, The Chef's version of the Super Shef tastes strikingly similar to a Whopper. Given the ingredients, this is unsurprising. Likewise, Burger Chef's historic relationship to Burger King also contributed to my utter lack of surprise over the flavor of the Super Shef. General Equipment, Burger Chef's initial parent company supplied Burger King with flame broilers during the King's early days in business. Burger Chef, then a subsidiary of General Equipment used the same broilers. It's therefore no great mystery why the flavor of the Super Shef is so similar to the Whopper.

As I finished up eating, I took a stroll around the dining room to bask in the vaulted ceiling glory of a historic Burger Chef structure. I was pleased to find framed pictures of the building as it looked in full Burger Chef regalia as well as a photo of the original menu board featuring the Big Shef and Super Shef at 1966 prices. The management here isn't shy about the business's heritage. Like Suzi's, they've expanded the breakfast menu for wider appeal. The building's interior has been modernized, but it's clear they're proud to be a former Burger Chef. They've preserved the Burger Chef menu, building, and brand to the greatest extent that they could given the legal and logistical constraints of outliving the Burger Chef brand by 37 years and counting. After a year on the road, The Chef gives me hope.


I dread the day that I run out of places to visit and write about for Broken Chains. I've recently found myself casting a wider net and travelling farther in search of places that are still operating under their original names. Places like The Chef, Suzis, and indeed, Fowlerville Farms and Farmstead, give me hope that there are more holdouts of broken chains nearby hiding in plain sight, doing business as they always have, but under new names so as not to arouse the legal teams of whatever corporate entities control their brand names today. Though they rarely use it, Hardee's parent company, CKE, is very protective of the Burger Chef name, hence the necessity of former locations disguising their true identity. I look forward to the prospect of tracking down other holdout businesses conducting business as usual under new names. When I find other broken chain locations that have entered witness protection, I'll be sure to out them here. Hopefully my writing will serve to increase their foot traffic without getting them sued.