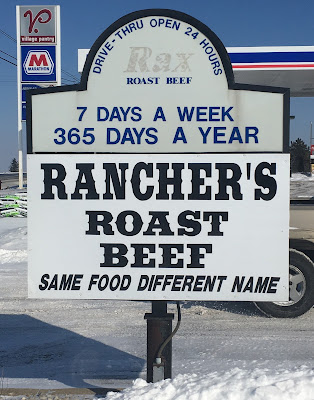 Approximately zero of my loyal readers would be surprised to learn that in my adolescence, I was a massive fan of “Weird Al” Yankovic’s unique brand of novelty music. His clever reworkings of pop songs, and his brilliant, yet underrated original songs spoke to my specific sensibilities, and indeed the sensibilities of a certain type of middle schooler in general. As I grew older, my enthusiasm for Weird Al waned, but I occasionally give him a nostalgic listen on Spotify, both to hear the classic songs I listened to on my Sony Discman in the ‘90s and to check out his later works. “Lame Claim to Fame” is a song from his 2014 album, Mandatory Fun, that I’ve latched onto lately.

The song is basically a long list of the narrator’s circuitous, unremarkable connections to minor celebrities, and while my sister never took piano lessons from Ralph Nader’s second cousin, I feel a connection to the song, not because of an interest in celebrity culture, but because this blog is essentially a list of my own lame claims to fame. Whether I’m trapped in the Drive Thru at Central Park, playing Big Boy Bingo all November long, or getting a G.D. Ritzy’s tattoo, the accomplishments I brag about to my friends are all pretty silly. Of all my dubious achievements, the one I’m perhaps the most proud of is visiting every surviving Rax Roast Beef location.


I started out as a Rax virgin, and began my quest by first visiting the three freestanding Rax locations in Ohio, finding them completely underwhelming and failing to understand the present day appeal of Rax until I visited the charming time capsule that is the Joliet, Illinois Rax. I went on to dine at a fourth Ohio Rax that was haphazardly cobranded with Long John Silver’s, which sadly has since closed. Finally, I visited the impeccably run Harlan, Kentucky Rax last fall, and the competition of my travels to every Rax became the story of the first Raxgiving.

Rax, like roughly half of the brands I explore here, still has a corporate parent in charge of the brand, and unlike places like Kewpee, Hot ‘n Now, or Uncle John’s Pancake House, Rax franchisees do not enjoy the level of autonomy that comes with surviving the demise of a parent company. They’re also required to pay franchise fees, which, ideally, would give them the benefits associated with being part of an established, thriving chain.

Following a long, complicated history of mergers, acquisitions, name changes, restaurant closures, and general decline, the Rax trademark ended up in the control of Rich Donohue’s company, From Rax to Rich’s. (a company name which sounds like it could be a title of a Weird Al deep cut;) Donahue, a longtime Rax manager, turned Rax franchisee, turned Rax CEO seems to have adopted the strategy of simplifying the menu of his own Rax location in Ironton, Ohio, and the other two Ohio Rax locations have followed suit. The limited menu is no doubt a reaction to the massive and ever-changing list of food offerings that scared loyal customers away from Rax in the ‘80s. The result of this strategy is that the Ohio Rax locations are limited to a lackluster menu of sandwiches and sides that fail to make them stand out in the modern fast food landscape. While the Illinois and Kentucky Rax locations thrive and make for a perfectly pleasant meal experience thanks to their impeccably maintained ‘80s style Endless Salad Bars, the salad bar-less Ohio Rax locations feel utterly generic beyond the nostalgic novelty of the Rax brand. While the salad bar locations felt vibrant and busy on my visits, the stripped-down Ohio locations I’ve visited have never seemed especially popular. It would stand to reason, therefore, that a franchised Rax location bound to the spartan modern menu has little incentive to remain affiliated with the Rax brand. 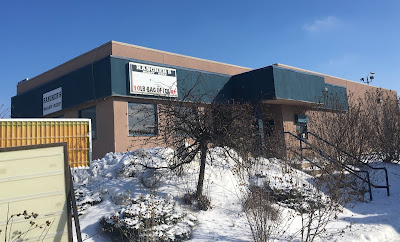 Judging from timestamped photos on Google and Yelp, the Rax in Bellefontaine, Ohio shed its Rax branding at some point between April and September of 2017, and became the similar, but legally distinct Rancher’s Roast Beef* whose signage bills itself as as having the “same food, different name” spelled out right below a prominent labelscar of the Rax logo. The building is unlike any other current or former Rax I’ve come across. The green and tan stucco on the outside makes me suspect this is one of the few Rax locations that was built in the early ‘90s after the buildings with slotted windows and solariums fell out of favor. As a result, I don’t believe this location ever had a salad bar. Inside, the walls are bare except for advertising a Disney vacation planning service, perhaps the owner’s curious side hustle. In addition to the cartoon mouse-based revenue stream several factors seem to have kept this particular not-quite-Rax in business in a time when fully 99% of other Rax locations have closed for good. 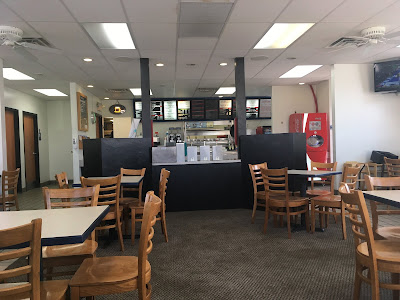 The building is situated near the intersection of two major highways that see a decent amount of traffic. Additionally, Bellefontaine’s Arby’s is located at the far end of town. Rancher’s also boasts a 24 hour drive thru, which could be an attractive alternative to the Waffle House across the street, which is sure to be crowded after the bars close. Likewise, the nearby McDonald’s closes at midnight. Losing the Rax name and the obligation to pay franchise fees surely reduced overhead significantly. Presumably, the Rax brand has so little recognition these days that losing it didn't cause a significant dropoff in business, especially since not much changed other than the name.

The interior is clean, but a little rough around the edges, and generally bland. There’s a small dining area with no decor to speak of. The menu board is an ancient Rax unit with any and all branding removed. During my first visit, I ordered up a regular roast beef sandwich and a barbecue beef sandwich. Unlike every location still flying the Rax flag, Rancher’s has a self-serve Coke Freestyle machine which looks quite incongruous in the well-worn dining room. Drinks at all other surviving Rax restaurants are poured by the staff behind the counter, ‘80s style.

Despite the different name and modern beverage service, my sandwiches were virtually indistinguishable from their Rax analogs, with the barbecue beef having the perfect blend of smoky, spicy, and tangy flavors hiding behind an overpowering sweetness that no doubt comes from an alarming amount of corn syrup in the sauce. The regular roast beef was distinctly Rax as well, which is to say, it tasted like a regular roast beef at Arby’s, except with slightly thicker, chewier meat. Unlike the official Rax locations in Ohio, my food came out hot at Rancher’s.

The next time I was in the area, I stopped by again, this time to sample the CBB, Rancher’s version of the Rax Bacon Beef and Cheddar also known as the BBC. What I got was a decent imitation, though the roll was a bit smaller, and the cheese sauce didn’t have the right flavor. I’ve seen modern pictures of containers of a proprietary Rax-branded cheese sauce, and I suspect that since Rancher’s no longer have access to it, they’ve substituted an off the shelf Cheez Whiz-type product. They also didn’t bother to warm it up, so I got a sandwich with hot beef and bacon and room temperature liquid cheese. The real Rax BBC would blow this imitator away, even if it came from the worst Ohio Rax. To quote Weird Al, “If it’s getting cold, reheat it!” On the bright side, my twisty fries were freshly cooked, and tasted just like Rax twisty fries, which is to say they tasted just like Arby’s curly fries. I also got a seriously tasty peanut butter shake on this visit, which is a shake flavor I haven’t seen at any Rax.

Overall, I’d put Rancher’s a notch above its Rax counterparts in Ironton, Lancaster, and Circleville, Ohio, but several notches below the Harlan and Joliet locations. It’s roughly on par with the dear departed Long John Silver’s Rax combo as an odd Rax-related curiosity with a decent interpretation of Rax food. If you’re looking for a Rax experience in Ohio, and you don’t mind not sitting in a solarium and a palpable absence of Uncle Alligator from the menu, you could do worse than dining at Rancher’s.


In the United States, parody is considered fair use, and as a result, “Weird Al” Yankovic is not legally required to get permission from musical artists to parody their songs. (He gets permission anyway because he’s a nice guy.) I’m not as well versed in fast food law as, say, an actual lawyer, but I can’t help but think that From Rax to Rich’s could build a decent legal case against Rancher’s for infringing on their intellectual property. After all, they seem to be blatantly imitating, and not meaningfully transforming the Rax concept. I doubt however that From Rax to Rich’s has the legal budget or the manpower necessary to pursue litigation at this point. I suspect Rancher’s and Rax will coexist until one brand or another closes up shop without as much as a cease and desist letter being sent.


*Confusingly, the Rancher’s in Bellefontaine seems to have no affiliation with restaurants also called Rancher’s Roast Beef in nearby New Carlisle, Washington Court House, and Greenfield, Ohio. These Ranchers are owned by a former Arby’s franchisee.
Posted by Zap Actionsdower at 6:24 PM