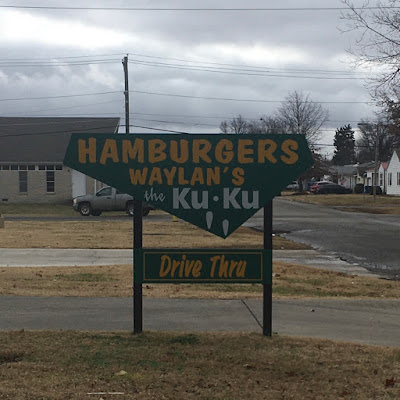 Imagine you own a successful franchised restaurant that’s part of an otherwise struggling chain. You receive news that the future of your thriving business is in jeopardy because the corporate entity that controls your brand is ceasing operations. Suddenly, your supply chain of reasonably priced ingredients and supplies dries up. Proprietary ingredients like special sauces and seasoning blends are in danger of being completely unavailable, and the brand recognition that brings people in the door will quickly evaporate. On the upside, you’re no longer having to pay franchise fees back to corporate, so whatever profits you manage to eke out in this new bleak reality are yours to keep, but in order for your business to survive, your entire operation must evolve.

In 1971, the fast food burger chain Sandy’s was absorbed by Hardee’s. (Hardee’s would go on to assimilate Burger Chef and Roy Rogers before being absorbed by CKE and becoming a sister brand to Carl’s Jr.) Eventually, most Sandy’s locations became Hardee’s locations, but a few Sandy’s franchisees opted to have their restaurants remain Sandy’s locations in all but name and operate independently. Hardee’s lawyers forced them to adopt similar, but legally distinct names like Zandy’s and Andy’s. These newly independent Sandy’s locations were forced to evolve to remain relevant and financially viable. Several lasted well into this century, but near as I can tell, all that’s left of the Sandy’s empire today is a vestigial footnote in Montana.

Sandee’s in Billings, Montana evolved from the local franchised Sandy’s, but as local tastes and the economy of operating a restaurant changed over the ensuing decades, so did Sandee’s. These days, they operate out of a modern building. The original Billings Sandy’s location at 511 Grand Avenue was long ago renovated beyond recognition and repurposed into offices. Their food bears little resemblance to what was served at Sandy’s. The sub-two ounce burger that sold for 15 cents at Sandy’s in the late ‘50s and the Big Boy-inspired Big Scot are nowhere to be seen at Sandee’s in Billings. By all accounts, the chain has evolved beyond any meaningful resemblance to the original Sandy’s. It’s probably a perfectly nice place to eat, but it’s not the kind of relic of fast food history untouched by time that I seek out. I considered adding a couple days to my trip to North Dakota last fall so I could venture into Montana and eat at Sandee’s, but concluded that it had evolved past the point of being of sufficient interest to justify a visit and a blog post. I’m only discussing it here, because I recently visited Waylan's Ku-Ku in Miami, Oklahoma, a restaurant that exists precisely at the point of still having a meaningful connection to its original, historic brand while having evolved significantly to keep up with modern tastes and economic necessities. I call that point The Ku-Ku Point. (See also, The Cici's Point.)

The particulars of the time and place of Ku-Ku’s founding are nowhere to be found on the internet, but most sources state there were around 200 of the cuckoo clock-themed burger stands in the Midwest by the mid sixties. My best guess, based on the original 15 cent price point of their basic hamburgers, would place their genesis somewhere in the mid to late fifties when McDonald’s sudden growth prompted a wave of imitators selling 15 cent hamburgers. Ku-Ku’s corporate parent ceased operations sometime before 1970, but a handful of Ku-Ku’s locations continued to operate independently. Over the years, those independent Ku-Kus slowly closed one by one, leaving only a single survivor, located along Route 66 in Miami, Oklahoma.

Eugene Waylan bought the Miami Ku-Ku in 1973 and has been working the grill ever since. The business operates out of its original cuckoo clock-themed building with gables adorning every facade, and the original fiberglass Ku-Ku mascot still stands guard by the sadly nonfunctional clock on the front of the building, and the original neon sign still stands out front, modified to include Waylan’s name. Yet, while the edifice is clearly a relic of a bygone era of fast food architecture, concessions to modernity have been made to keep the business relevant and viable.

The building sprouted an expanded dining room well as a drive thru lane in 1977, followed by a Rax/Wendy’s style solarium in 1990, but the additions did little to alter the kitsch appearance of the building. The restraint shown in modifying the historic building, and its position along old Route 66 has made it an attraction for nostalgic tourists retracing the historic route, and is likely a major contributing factor to the restaurant's longevity. I figured it would be worth stopping by for lunch while I was in the area for no reason other than to check out the building.

It was lunchtime on a Sunday when I found my way to Waylan’s Ku-Ku as it’s been known for the past 47 years. The restaurant was busy, but not overwhelmed, and I caught a glimpse of Eugene Waylan, the septuagenarian dynamo himself hard at work behind the grill wearing his signature bolo tie as I stood in line. I studied the menu board, that had clearly grown over the years, and opted to try a cross section of old and new, ordering a double cheeseburger and strawberry shake, which I surmised had been on the menu in some form since the days when Ku-Ku was still a franchise. I also ordered a chili dog, which may or may not have been a modern addition, plus a cherry limeade and and order of Ku-Ku fries, which were both almost certainly added sometime after Mr. Waylan's 1973 acquisition of the business.


After I had ordered, the cashier handed me an order ticket printed with both the Ku-Ku logo and the Answer to Life, the Universe, and Everything, and I took a seat in a booth on the periphery of the 1977 dining room, which like the rest of the interior had walls adorned with cuckoo clocks, route 66 memorabilia, and homemade Ku-Ku tchotchkes. After a few minutes, my number was called, and I returned to my seat with an overloaded tray from which I examined each of my selections.


The double cheeseburger was similar in size and composition to its counterpart from a modern McDonald's, though this one tasted much beefier than a similar burger from McDonald's would have. It also used real diced onions, on top of the patties with pickles, ketchup and mustard nestled below them. It was obviously, a McDonald's-inspired burger that dated back to the early McDonald's-imitating days of Ku-Ku, but thanks to better quality ingredients, it tasted like a much better version of a McDonald's double cheeseburger. Like the double cheeseburger, the chili dog had condiments hiding under the meat. Chili and cheese sauce lurked under a somewhat pallid frankfurter. The strawberry shake was unremarkable among strawberry shakes. It was perfectly tasty, and had been blended from soft serve from a modern machine. It had little bits of real strawberry in it. I imagine the shakes would have been blended from hand dipped ice cream back in the '50s and '60s, but I'll take a freshly blended shake over one from a shake machine any day, soft serve or not.

The limeade, on the other hand, was unlike any I had encountered before. While my local Sonic throws a squirt of red-flavored syrup and some token fruit chunks into a cup of Sprite and calls it a limeade, Ku-Ku's limeade is made from freshly squozen lime juice and seltzer water, sweetened with a flavorful cherry syrup. It has ruined Sonic limeade for me. I'll never drink another, though I may try and recreate Ku-Ku limeade at home. Ku-Ku fries turned out to be some perfectly tasty loaded waffle fries topped with real bacon bits, yellow cheese and fresh scallions and served with a tube of sour cream. They were the most obvious modern addition, as I don't recall encountering waffle fries before the mid '90s, nor do I recall seeing loaded fries, dressed like a baked potato until the early '00s. This, and countless other menu items, like the buffalo burger and fried green tomatoes, had, no doubt, been added over the years to keep people interested in the historic burger joint. It's a strategy that's tough to argue with; Ku-Ku seemed to be doing a much more brisk business than the modern Taco Bell next door, but part of me pines for an immersive, anachronistic fast food experience.


That's why I spend so much time talking about, and revisiting, my favorite working fast food museums; Places like Rax, G.D. Ritzy's, Druther's, Taco Tico, Kewpee, and York Steak House exist as they have for decades, and their decor and cuisine transport diners back to another era when today's near-forgotten restaurant chains were thriving. Their rare status as relatively untouched, unevolved outlets of nearly defunct restaurant brands makes them feel all the more special in a world of constantly changing chain restaurants and stores. 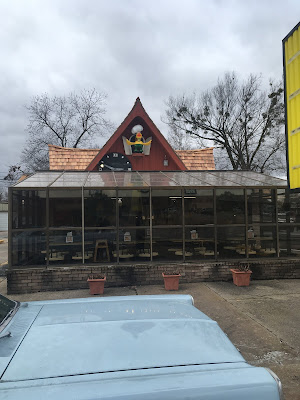 While Waylan's Ku-Ku is far from a working fast food museum, its continued existence is no less remarkable, and it is no less worthy of my time. Mr. Waylan did what was needed to survive and preserve his piece of the Ku-Ku brand while the rest of the empire faded into obscurity. If modernizing the last remaining Ku-Ku location is what it took to preserve the brand, I'm glad it happened. I'd rather have a Ku-Ku with a tacked-on drive thru and waffle fries than a Ku-Ku with a modern building and no original menu items, or worse yet, no Ku-Ku at all. In the case of a modernized-beyond-recognition Ku-Ku, I wouldn't be writing about it here, and I probably wouldn't have bothered to visit. If the Miami Ku-Ku had to evolve to survive, I'm immensely thankful that it was evolved judiciously to preserve not only a historic Route 66 landmark, but also a burger that elevates the genre of basic fast food burgers.

Posted by Zap Actionsdower at 7:13 PM