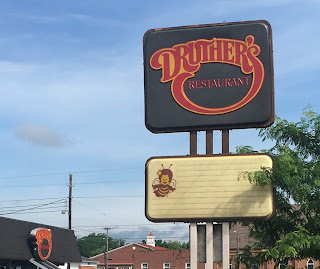 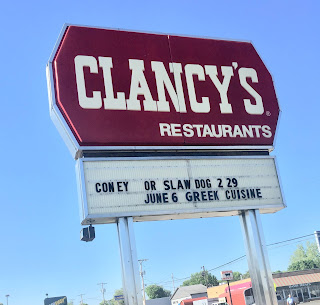 Ray Kroc’s success franchising the McDonald brothers’ quick service restaurant concept in the ‘50s and ‘60s spawned countless imitations of the McDonald’s model, resulting in a full-blown fast food boom in the early to mid '60s. This boom spawned many regional chains that thrived in that economically prosperous era when gas was cheap, cars were massive, and suburbs sprawled. But fuel crises, economic downturns, and an increasingly competitive fast food market forced many of the smaller fast food chains to close and/or be acquired by larger players in the industry in the 1970s. The small chains that survived the ‘70s were forced to employ novel strategies to ensure their revival. Often they’d open locations in smaller markets that the larger chains wouldn’t touch to ensure limited competition. Chains like Druther’s and Clancy’s would often be the only fast food in the towns where they had locations. I mention those chains specifically, because they each have a single location still open for business, and I visited both of them recently.

Druther’s started life as Burger Queen, which opened its first restaurant in Middletown, Kentucky in 1963. Burger Queen evolved to have an extensive menu including burgers, fried chicken, a breakfast menu and a salad bar. The name change occurred sometime around 1980, to reflect the increased variety of menu items. Similar to Nickerson Farms and their Li’l Honey Bea character, Burger Queen used an anthropomorphic female bee named Queenie Bee as mascot. She was largely replaced by Andy Dandytale, a banjo-picking troubadour around the time of the name change to Druther’s. I can find no accounts of the name change having anything to do with pressure from Burger King. Druther’s peaked with somewhere around 200 locations mostly in the Southeast. There were Druther’s locations around when I was a kid, and I remember elderly relatives erroneously referring to both Druther’s and Burger King locations as Burger Queen. My father would often tell me stories of eating far too many meals at Burger Queen when he was single and just out of college.


The Campbellsville Druther’s is the last one in operation, and has been for at least a decade. I first found it around 2005 using Mapquest and other tools of the time. (I believe the penultimate Druther’s was in Princeton, Kentucky, but it had closed by the time I drove there looking for it in 2006 or so.) They’ve been in business since the early seventies in the same location, and were initially a Burger Queen. Queenie Bee is still on their sign. I’ve been back to the Campbellsville Druther’s a few times since initially discovering it, ordering different menu items each time to get a feel for what it would have been like to eat there in the seventies and eighties. The menu has changed very little. They still seem to have the original menu board, and when I took my father there a couple years ago, he was impressed with how close it was to the Druther’s of his young adulthood. Like many places I’ve checked out, I follow Druther’s Facebook page. They often post pictures of their breakfast items. I hadn’t tried their breakfast until this trip.


I pulled into the Campbellsville Druther’s late on a Saturday morning to find the parking lot packed. I had been on a broken chain bender, having eaten at Taco Tico, Ollie’s Trolley, and G.D. Ritzy’s the day before. The dining room is full of locals enjoying breakfast. I order up a breakfast plate, which comes with two eggs, a meat (I chose bacon) an in-store baked biscuit with gravy, plus hashbrowns. All that plus a large drink ran me six bucks and change. It’s all pretty good, and the eggs are cooked to order. The bacon is thick cut, impressive for a fast food joint. It’s not an especially distinctive breakfast, but it’s of good quality for a great price. I’m not able to get many pictures inside the crowded restaurant without looking like a weirdo, but I had forgotten how light and airy the tall arch-topped windows make the dining room feel. Old Druther’s buildings are tough to spot, but the tall windows are what gives them away.


Clancy’s was a much smaller chain with around 31 locations in Indiana, Ohio, Kentucky, and Tennessee at their peak. They also employed the strategy in opening in smaller markets to limit competition. The first location opened in Noblesville, Indiana in 1965. Unlike Druther’s which essentially operates independently, Clancy’s parent company is still involved with the day to day operations of the single remaining location in Sidney Ohio, plus a couple other area restaurants according to their website, which also contains a lot of information on the history of the brand. It also says there are plans to open a new Clancy’s in Nobleville, Indiana “by 2015.”


Clancy’s takes its name from a character in the Keystone Kops movie character. I suspect Chief Clancy Wiggum from The Simpsons is named for the same character. Clancy's claims to be among the first to use a double drive thru They also embraced indoor seating early on. I stopped into Sidney Ohio Clancy’s for breakfast on my way down to Louisville and found an impeccably-maintained early 1970s vintage building, which reminded me a lot of Arctic Circle locations built around the same time. The dining room was spotless and seemed to have the original tile floors and light fixtures With Clancy’s logos and their Clancy the Cop mascot printed on them. A pair of curio cabinets in the corner were full of vintage Clancy’s artifacts, something I need to imitate with my collection of fast food artifacts. 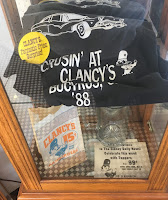 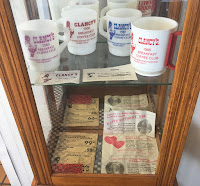 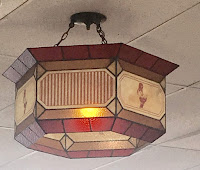 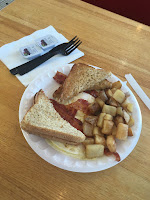 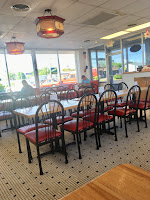 I didn’t have any personal experience with Clancy’s, but it was on the way to Louisville, and i was excited to explore a new broken chain. I stopped in early on a Friday morning to find the dining room about half full. I ordered a breakfast plate, and while the thin bacon pieces and toast didn’t quite measure up the to Druther's thick cut bacon and biscuits I’d eat the next day, the Clancy’s home fries blew the Druther’s deep fried hash brown patty out of the water. The price was about the same, around six dollars. I still have family in Kentucky, and find myself driving through Sidney often. I could definitely see myself stopping here again on my next trip down I-75. I’ve heard multiple people rave about the fries, so I’ll have to stop in during lunch hours next time to give them a try.

Both Clancy’s and Druther’s are nicely maintained pieces of history which should be preserved, experienced, and appreciated. The owners and employees of both establishments seem to do a great job of doing things the old way operating working, delicious museum exhibits that anyone can experience for the price of a cheap breakfast.
Posted by Zap Actionsdower at 8:42 AM