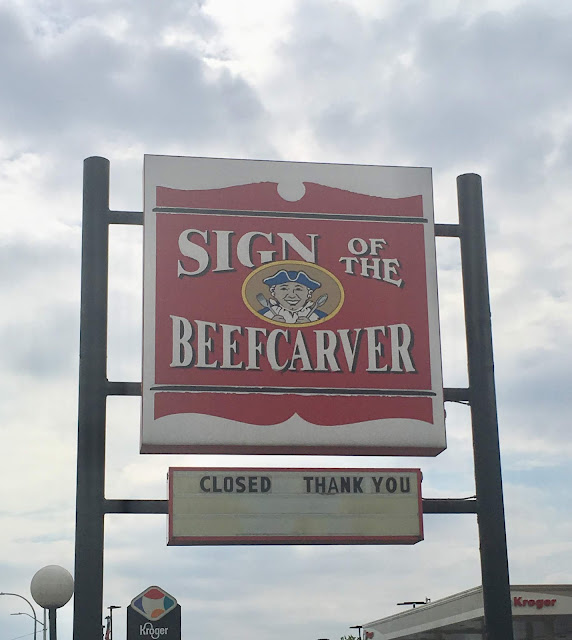 
Partner Howard Johnson franchisees Bob LaJoie and Jack Joliat opened the first location of their new restaurant concept, then called Sign of the Beefeater in 1957. The name change occurred as the result of a lawsuit by Beefeater gin challenging their use of the Beefeater name. By 1972, there were eight locations around Detroit. That same year, the entire operation was bought out by Montgomery Ward who expanded into the Chicago market and possibly Florida as well, peaking at around 20 locations. When Montgomery Ward was acquired by Mobil Oil in 1979, a group led by chain co-founder Jack Joliat reacquired the company including all of the restaurant locations. It appears Sign of the Beefcarver did very little, if any franchising. Over the years, the number of locations shrank to two, and now one. Near as I can tell, members of the Joliat family are still involved in operation of the lone remaining restaurant.

I had dined at the Dearborn Sign of the Beefcarver several times, most recently early this year. Every meal there was memorable, and a step back in time. The early American decor and vintage fixtures made for an immersive bicentennial-era experience. Likewise, the cafeteria style service conjured faint memories of my early childhood eating at Morrison’s and Blue Boar cafeterias. The food at Sign of the Beefcarver was always fresh and plentiful. True to the name, employees would carve off slices of roast beef in front of you when you ordered it. As it was in the beginning, no fried food was offered, even the fish was baked, quite a departure from LaJoie and Joliat’s Howard Johnson franchise which is sure to have sold mountains of fried clams. Salads, desserts, entrees, and hot sides were abundant and diverse. Upon reaching the end of the serving line your tray would, more often than not, be uncomfortably heavy. Because of this, and likely, in part, due to the chain’s mostly elderly clientele, an employee would be waiting to carry your tray to a table of your choice. I’m going to miss having such a uniquely anachronistic place so close by.

There’s one Sign of the Beefcarver open for business, but it’s tough to say for how long since the closure of the Dearborn location was announced on the same day it closed. I figured I should experience the Royal Oak location and share it with you, my loyal readers, while I still could. I stopped by early on a Friday afternoon, after the lunch rush, but before the seniors came in for an early dinner. The layout is slightly, but not drastically different than the old Dearborn location, but the overall feel of the place is exactly the same. There's very little wait, and after taking a couple surreptitious pictures, I work my way down the serving line, picking up what was my usual order in Dearborn. The staff is friendly and courteous, and just like in Dearborn, an employee is waiting to carry my food to the table. I stop by the condiment station to pick up complimentary bread and butter pickles, pickled beets, and horseradish and join my dinner at the table. Everything tastes exactly as I remember from my last visit a few months back. The beef is tender and the potatoes are made from scratch. The Waldorf salad tastes just like my grandma's, and the blueberry pie is the perfect finish. (As I'm writing this, I'm realizing that I'm a bowl of tomato soup shy of the chewing gum-based meal that caused Violet Beauregard to meet her ironic, antioxidant-tinged demise.) The meal was not only the perfect way to end what had been a difficult week, but also the exact experience I needed to cope with the loss of the other location.


Every time I go back to Sign of the Beefcarver, I'm reminded of why I love it. You just don't see much of anything being served in a cafeteria format anymore, at least not in this part of the country. So many details are just as they were when the place was new. It's clear that they've been doing things a certain way for a very long time, and I hope they continue to for a very long time. Losing my local location still stings, but it's nice to know I can still get the Sign of the Beefcarver experience half an hour away in Royal Oak. I'll come back often, as long as they remain open to enjoy a glimpse into an era when meat was red, horseradish was overpowering, and you never had to carry your own tray.

Posted by Zap Actionsdower at 7:03 PM