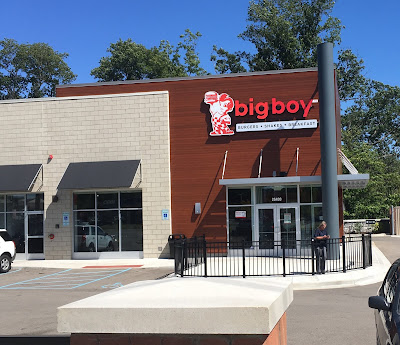 Big Boy as a brand has lacked a single cohesive identity for the majority of its existence. Between the myriad regional franchisees, each with their own quirks, and the brand's transition from a drive-in to a full service restaurant chain in the 1960s, the Big Boy brand means different things to different people depending upon where they grew up and when. Marriott tried and failed to make Bob's Big Boy a lasting national brand in the 1970s when the loose association of regional Big Boy chains began to fall apart, but for all the instances of divergent and convergent evolution that compose Big Boy's history, one could argue that the smart move would have been to enter the fast food market.

Big Boy was just becoming a well-established brand when Ray Kroc was defining American fast food culture with the ideas he borrowed from the McDonald brothers, and over the next couple of decades, it became clear that fast food was more than a passing fad. In that time, most Big Boy locations had transitioned from drive ins to full service restaurants just in time for the ever-growing fast food chains to move upmarket from the 15 cent, 1.6 ounce hamburgers that helped establish them, and seemingly the logical progression was to double up the meat and place it on a three piece bun. Seemingly every burger chain and countless mom and pops all had their own Big Boy-inspired double deck burgers in the '60s and '70s, and whether you were eating a Big Shef at Burger Chef, a Big Scot at Sandy's, a Club Burger at Carroll's or a Big Mac at McDonald's, you were probably getting a product very similar to what was offered at Big Boy for less money with less hassle.

Rather than forcing Big Boy into the already crowded fast food segment where it already had a brand, Roy Rogers, Marriott opted to increase emphasis on things like salad bars, breakfast buffets, and outstanding service at Big Boy. It worked for a while, sustaining both Frisch's, Bob's and the Big Boy chain formerly known as Elias Brothers into the current century, but as I discussed at length on the occasion of my visit to the final Embers, restaurant chains that offer table service but don't sere alcohol are rapidly dying. The previous owners of the Michigan Big Boy chain knew this and launched a fast casual Big Boy Burgers and Shakes location as a prototype for a modernized Big Boy location. That restaurant is still open east of Cleveland, Ohio, and I have yet to visit it. (I've got to save something for Big Boy Month 2020.) Instead, the Big Boy prototype location that caught my interest is the one that opened this year.

Big Boy Restaurants, LLC has expressed a goal of growing their 75 unit chain to 200 locations in the next seven years, and it would seem that a tool they intend to use to accomplish that goal is to open low-overhead, fast casual Big Boys with limited menus and no waitstaff in strip mall slots. The first location of this type opened in a newly constructed Big Boy Restaurants, LLC-owned strip mall in Southfield, Michigan this summer, and I naturally went to check it out.


From the outside, it looks nothing like any other Big Boy location I've experienced. There's no Big Boy statue out front. The building is a nondescript strip mall, of which Big Boy occupies roughly a third. The two other slots are a Starbucks and a vacant storefront. The sign on Big Boy's portion of the building has a unique lowercase font and a monochromatic Big Boy graphic. The place looks as if Chipotle's marketing team had been tasked with designing a Big Boy location. I visited early on a weekday afternoon between the lunch and dinner rush, and found a few customers scattered about the dining room.

The entrance leads straight to an approach to a single register with ample room to accommodate a line of customers, and a printed menu is mounted on the wall to the right of the line. I was pleased to find that in addition to the Michigan style thousand island topped Big Boys, that a California style Bob's Big Boy was offered. I ordered one along with a side of fries and a hot fudge cake. I paid the cashier, was given a numbered card on a tall metal stand and was instructed to sit anywhere I liked. This was nothing like any other Big Boy I had ever visited, but was a welcome change. I procured my customary Diet Dew at the self serve drink fountain and took a seat where I could admire the decor which included a Big Boy word cloud style graphic, and an indoor Big Boy statue that I was pleased to learn is a giant bobble head. An employee delivered my order a few minutes later. I inspected the top bun and found it was indeed topped with the red relish associated with Bob's Big Boy locations on the west coast, which seems to be little more than a mixture of pickle relish and ketchup.


Big Boy founder Bob Wian created this original iteration of the Big Boy to wow his depression-era customers with an comically tall and decadent hamburger, but in this age of ever-increasingly ridiculous fast food sandwiches it feels a little small, even skimpy. After my first bite, I found myself thankful I didn't travel to California to try a Bob's Big Boy this year, because without the tangy Michigan thousand island, or Frisch's signature tartar sauce, Bob's version of the Big Boy tasted like a burger with relish and ketchup, not terribly special and in need of more than a little mustard. The fries were not the worst Michigan Big Boy fries I've encountered.


The employee who served me my burger and fries, noticing I was finishing up, asked if I was ready for my hot fudge cake. I responded in the affirmative, and watched as he struggled with the hot fudge warming and pumping apparatus. He seemed to be having trouble pushing the machine's plunger down to extract the fudge, and when he brought the dessert to my table, I realized why. The hot fudge sauce was not hot, and because of its low temperature, its higher viscosity made it difficult to pump onto the cake, and it was holding its extruded shape, and not melting over the sides like the menu shows. To say the brown logs of not-hot fudge did not appear appetizing was an understatement, but even a bad hot fudge cake is still pretty tasty.


I returned to give the new format Big Boy another shot a few weeks later, and found more customers and a more attentive staff along with a busier dining room. This time I ordered my customary Super Big Boy, and found it to be up to the same high standards as other Big Boys I've experienced in the Wolverine state. The location seemed to have worked out the bugs, but I'm still a little hesitant to order another hot fudge cake. Overall, I think I prefer the style of service to the traditional Big Boys. Having a server take your order for a simple burger and fries seems more than a little excessive, and the fast casual format fits a burger-driven menu better. But while I don't miss the overly formal seating and serving protocols of the older Big Boy locations, I can't help but feel like the omission of the salad bar is a glaring error. 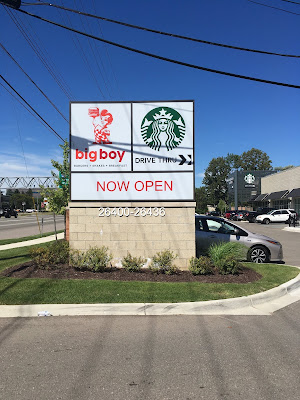 I almost always get the salad bar at Big Boy, even when I'm just ordering a burger, and you can make a healthy meal out of just Big Boy's hearty soups and salads. Salad bars are strongly associated with virtually every Big Boy and Big Boy-descended chain. To throw them out along with servers taking orders feels like an over-correction. No one in the quick serve or fast casual segments offers a salad bar, so a salad bar at a fast casual Big Boy feels like a perfect way for them to maintain a cohesive brand identity while setting themselves apart from competitors. Salad bars were a part of Wendy's identity during what I think most would agree was their best era, and the two best surviving Rax locations are the ones that still offer the chain's signature salad bar.

Speaking of, Raxgiving went great. Thanks to Ryan, Mapcat, and my long-suffering mother for making the trek to a remote corner of Kentucky to share an experience with me at the best Rax left. If you didn't make it to Raxgiving this year, don't worry I've already got a similar event, in the works in a less remote location. Raxgiving also marks the end of Big Boy Month, as does November 30th. Normal Broken Chains posts will resume next week.

Posted by Zap Actionsdower at 5:41 PM