Let’s Hear it for the Boy! 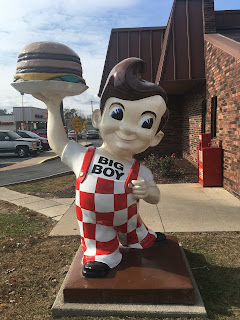 It’s been November for nearly a week now, and I can feel the pudgy, pompadoured, fiberglass countenance of the Big Boy beaming down at me from on high. Big Boy month is upon us. It’s a time for celebration of the once national network of loosely affiliated regional restaurant chains that soldiers on as a few unaffiliated regional chains today.

Big Boy is perhaps the most imitated American restaurant chain of all time. The empire Bob Wian built on the back of a double deck hamburger and an adorable cartoon mascot has been widely plagiarized. The McDonald’s Big Mac, for instance, was inspired by the Big Boy Hamburgers sold at an Eat ‘n Park Big Boy in Pittsburgh. Frisch’s Big Boy in the Ohio/Kentucky/Indiana tri-state area inspired the Burger Chef Big Shef that predated the Big Mac. For that matter, Frisch’s is arguably the inspiration for the postwar iteration of the entire restaurant chain, Jerry’s, whose parent company would go on to establish both Long John Silver’s and Fazoli’s.

Big Boy’s wide imitation by other chains is because of its early success and sudden ubiquity in postwar America. Rapid growth in the early years came from its growth strategy of selling Big Boy franchises to existing regional restaurant chains, effectively uniting them as one big chain with a bit of regional variation. This strategy would eventually become Big Boy’s undoing as many of those same chains would leave the system as their initial franchise agreements expired or cease operations when their fortunes changed.

Today, the Big Boy name is still used by two completely separate chains. At least three other chains formerly affiliated with Big Boy are still in operation as well. Last year’s Big Boy Month posts focused on four of those five chains. This year will be a bit different. I’ll be doing a deep dive into the two chains that still use the Big Boy name, visiting multiple locations of each in search of the best possible Big Boy experience from two chains that have undergone myriad ownership changes and endured steady declines in quality and territory.

My motivation for this plan is based on a fear that I did not take sufficient care when selecting Big Boys to visit last year. As a result, I wound up with a too-small sample size reflecting an overall negative experience. This year’s Big Boy visits are an effort to rectify that and document the best and most interesting locations still using the Big Boy name in the Midwest. So settle in for a month of Big Boy posts as I experience the brand, two patties and three bun pieces at a time.
Posted by Zap Actionsdower at 11:49 AM