A few weeks back I was inundated with messages and comments from readers, friends, acquaintances, frenemies, and enemies about a video the noted YouTuber, author, and Vlog Brother Hank Green had uploaded to the YouTube channel he shares with his brother, John. He discussed at length their childhood meals at the local Rax restaurant and segued those memories into a discussion of an ad campaign for the fast food chain that was launched shortly before their 1992 bankruptcy. I had long been aware of Uncle Alligator, the Rax mascot geared toward the youngest Rax customers, but I had never heard of Mr. Delicious, the plaid suit wearing middle-aged character associated with the chain’s final pre-bankruptcy ad campaign. Mr. Delicious was the antithesis of the avuncular cartoon gator that adorned Rax kids meal bags and molded plastic drink bottles. Mr. Delicious was instead meant to appeal to adults looking for a grown up, dare I say, stylish fast food experience. Amid the Rax bankruptcy, Mr. Delicious faded into obscurity as quickly as he appeared, and he likely would have been largely forgotten were it not Hank Green’s video.

Mr. Delicious, and obscure restaurant mascots in general were on my mind as I was brainstorming how I could best observe Big Boy Month in a time when travelling long distances and eating in restaurants are both inadvisable, if not impossible. Earlier this year, seemingly in response to the chicken sandwich craze that Popeye’s sparked, the Michigan shard of the shattered Big Boy empire revived one of the Big Boy brand’s own obscure mascots to be the face of their entrant into the suddenly crowded premium chicken sandwich market. Dolly, the namesake of the new sandwich, was once a character who appeared with Big Boy in the eponymous Big Boy comic books that were once handed out to the youngest Big Boy patrons. I don’t recall ever seeing a Big Boy comic book anywhere but the odd antique shop or vintage comic book store in my three odd decades as a human being and occasional Big Boy customer, but Dolly was ripe for rebirth nonetheless, likely because she could be resurrected cheaply without having to pay any artists or lawyers to create or license a new character.

I have somehow managed to avoid eating a Popeye’s chicken sandwich as well as its many analogs save for an occasional Chick-fil-A in my weakest moments when my desire for greasy poultry and pickle slices on a bun outweighs my distaste for the bigotry of the brand’s owners. As for Popeye’s, It’s not politics, but poor service that has kept me away. I’ve visited Popeye’s locations all over the country, but I’ve never been to one I would describe as “Clean” or “Well-run.” Add a drive-thru line that stretches out of the parking lot and down the block, and it’s been more than enough to make it easy for me to resist the allure of a Popeye’s sandwich. 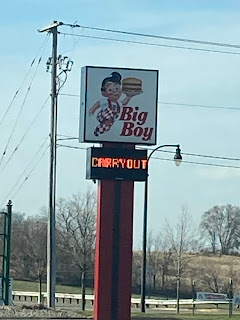 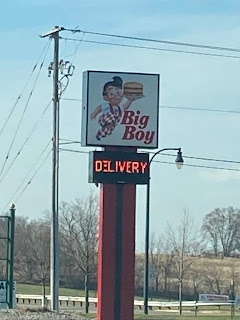 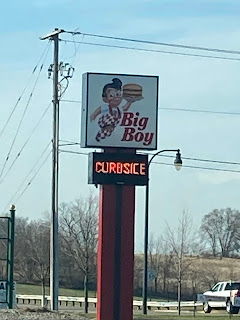 My complex feelings about premium chicken sandwiches had been the back of my mind for weeks when I was mindlessly scrolling through Facebook and happened upon a post by Tuckey’s Big Boy in Tecumseh, Michigan, where I had a very pleasant meal last fall, announcing that they had both online ordering and curbside order pickup. I immediately saw this as an opportunity to give the Dolly chicken sandwich a try and to get out of the house for the couple of hours it would take me to drive to Tecumseh and back, so as soon as I had the time, I got out my phone, navigated to the only slightly glitchy online ordering platform and put in a late lunch order. I’ve lately passed my free time exploring the back roads of Southeast Michigan, and I plotted a semi-circuitous route of my favorite semi-scenic, semi-paved thoroughfares to take me to Tecumseh. 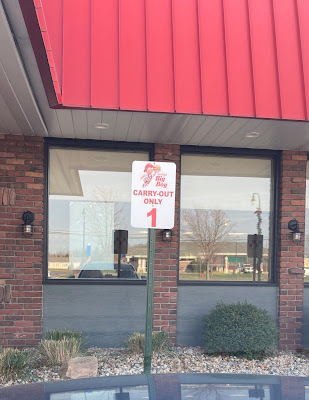 I pulled into the empty Big Boy parking lot at 1 PM on a Friday, two days into a three-week ban on inside dining issued by the governor. The governor’s order had little effect on me. I haven’t eaten in a restaurant since March, opting instead for takeout and DoorDash orders, but the sudden decline in business resulted in Tuckey’s Big Boy cutting back their hours to offer only dinner four days per week. On the days they were open for lunch, there didn’t appear to be much of a rush of takeout customers, at least there wasn’t a rush when I was there. I pulled into one of the four empty parking spots marked for curbside pickup, and called the restaurant. I informed them I had placed an online order, and the voice coming through my phone informed me that it would be right out, an assurance offered without asking for my name or order number, implying that mine was the only pending online order. A masked Big Boy employee emerged from the restaurant’s front door a minute or two later with my bag of food, which I promptly took before driving around to the back of the restaurant to eat in my car.

In addition to the Dolly sandwich I ordered, I also requested coleslaw, coconut cream pie, and mandatory fries came with my sandwich as is customary at Michigan Big Boys. I’m happy to report that the various sides and desserts were far from the worst I’ve experienced at a Michigan Big Boy, but the sandwich was the main event. Just like Popeye’s chicken sandwich, the Dolly is offered in mild and spicy variations. I opted for the mild version, not out of an aversion to spicy food, but due to the novel fact that the mild Dolly is topped with tartar sauce, perhaps inspired by Frisch’s, the Ohio/Indiana/Kentucky contingent of the remnants of the Big Boy chain that tends to put tartar sauce on everything. The first bite of the Dolly made it abundantly apparent what all the chicken sandwich-related hoopla has been about. It’s not an exaggeration for me to say it was the best chicken sandwich I’ve ever eaten, thanks to the presence of a thick and juicy fried chicken breast, and the perfect amount of tartar sauce and pickles that have a subtle spicy, tangy flavor that remind me of some flavor I experienced in better times, perhaps decades ago, but can’t quite place. The brioche bun, while trendy, was also the perfect delivery device. Its dense crumb held up well to the briny pickle chips and tartar sauce that had lost its viscosity once it came into contact with hot chicken. Best of all, the Dolly is a sandwich that can be experienced without strings attached. As far as I know, the Big Boy brand carries no political baggage comparable to that of Chick-fil-A, and the worst service I've experienced at a Big Boy is better than the best I've had at a Popeye’s. The Dolly stands as a great chicken sandwich, uncomplicated by the unpleasantness of the world around it.

An individual more talented than myself once offered the advice to enjoy every sandwich, and that chunk of wisdom is on my mind as I recall eating that Dolly chicken sandwich in my car while parked behind the Tecumseh, Michigan Big Boy. In a time with relatively few bright spots, something as simple as eating a really good sandwich stands out more than it usually would, and serves as a reminder that every sandwich, every small, simple pleasure is worth savoring and enjoying, especially when pleasant, normal, experiences are in short supply. But it was the ritual surrounding the sandwich, the drive to an obscure corner of the map, snapping the surreptitious photos, and indeed, writing this very blog post that have the fleeting, subtly spicy tang of the semi-recent past, and hopefully also the not too distant future when I can again travel wide and far to experience the surviving locations of the broken chains.

With the conclusion of Big Boy Month comes Raxgiving, a day set aside to support the broken chains. I won’t make it to a Rax this year, but I plan on supporting a broken chain restaurant or two that are closer to my home. I encourage anyone reading this to support their local restaurants as well, whether or not they be associated with a broken chain, provided that you can do so safely.