No Good Thing Ever Dies 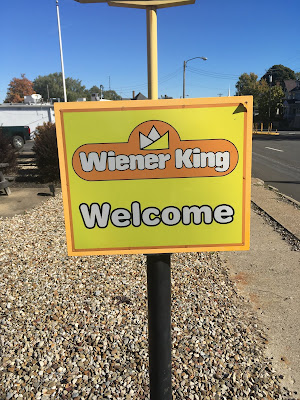 For the ninety-seventh time in my life, I am guilty of writing a blog post. This blog post. Of course, I doubt the ISPs will toss up any firewalls for that. Not for a silly old blogger like me.


I could probably sit down on some rainy Saturday afternoon and sort chain restaurant names into different etymological categories. Some are straightforward, based on the names of the restaurant’s founder, like Bob Evans or Howard Johnson. Others like Wendy’s and Big Boy are named for adorable children in the lives of the chains’ founders. You’ve also got the celebrity-endorsed chains like Arthur Treacher’s, Minnie Pearl’s, and Roy Rogers and the food-plus-edifice naming convention used by places like Waffle House and Pizza Hut, but fictional culinary royalty is my favorite fast food naming convention.

The fast food monarchy is full of benevolent rulers and pretenders to the throne. We all know Her Majesty the Dairy Queen, but there was also once a Burger Queen. Likewise there are independent Dairy Kings in Michigan and Tennessee. There are actually two Burger Kings. One rules over Mattoon, Illinois while the other Burger King’s dominion is the entirety of the world except Mattoon, Illinois. The theme of feuding Kings appears again chronically underrepresented fast food hot dog genre, as there was a time when there were two Wiener Kings. 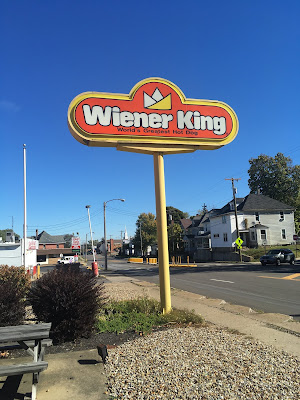 Wiener King was founded in Charlotte, North Carolina in 1972 by Ronald Howard. (No, not that Ron Howard. There are also two Ron Howards.) The other Ron Howard found his company embroiled in a legal battle when he was sued for use of a name not by the more famous Ron Howard but by the other Wiener King, a two-location chain established a decade earlier in New Jersey coincidentally also named Wiener King. The outcome of the court case prohibited not-Opie from using the Wiener King name within a 40 mile radius of the New Jersey wiener kingdom but not-Richie Cunningham was allowed to use the name elsewhere in the US. 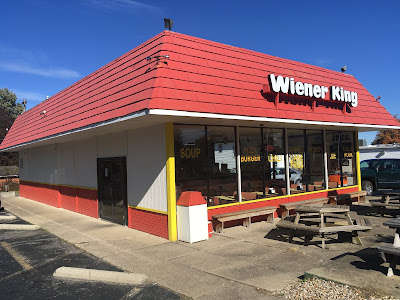 With the legal battle behind them, the chain expanded rapidly and widely in the 1970s. I can’t find any definitive location counts, but there are mentions online of former locations as far away from Charlotte as Danville, Illinois. Wiener King dissolved in the early ‘80s, and today the only remnant of not-the-Arrested-Development-narrator’s Wiener King empire are Wiener Works, a suggestively-named three-unit chain in Fayetteville, North Carolina whose original location appears to be a minimally rebranded Wiener King, and a single restaurant in Mansfield, Ohio that is still called Wiener King. The litigious New Jersey Wiener King appears to be no more. A desire to experience Wiener King and a lack of time to drive to North Carolina from my Michigan home took me to the Mansfield Wiener King a few weeks ago.

At the start of the trip, I found I was so excited I could barely sit still or focus on my GPS. I think it’s the excitement only a trip to a broken chain can provide, a broken chain not experienced before where the food and atmosphere are uncertain. I hoped there would be original signage. I hoped to get a chili dog and stuff it in my face. I hoped the building would look as retro as it did on Google Street View. I hoped.

Mansfield’s main claim to fame was that it stood in for small-town Maine in the 1994 film, The Shawshank Redemption, thanks to its charming downtown and derelict prison. Signs around town marked Shawshank filming sites as a rolled into town late on a Saturday morning. My schedule was such that I’d be having an early lunch shortly after the restaurant’s 11 AM open time. I arrived at 11:02 to find the doors locked with no signs of life inside. I was about to return to my car to check the Wiener King Facebook page where holiday and other closures are announced when a car pulled up. It’s drivers my window lowered, and I recognized the driver as Jimmy Smardjeff, (Yes, that Jimmy Smardjeff!) owner of the Mansfield Wiener King, whose photo has appeared in various local news stories about his efforts to keep the restaurant open after he inherited the wiener crown from his father, who opened the restaurant in a former Arthur Treacher’s building in 1976. 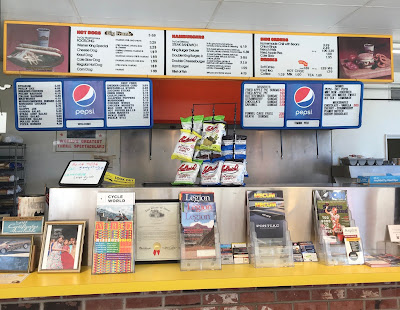 Instantly friendly and personable, His Majesty, the Wiener King of Mansfield apologized for the delay and invited me in as he unlocked the door and called to an unseen employee who had presumably been firing up the various commercial appliances for the day. That employee took my order, and after I had paid, King Jimmy made small talk with me about local politics as he prepared my drink. I normally dislike small talk, but I found King Jimmy’s demeanor charming and intoxicatingly friendly. I concluded that had the effortless grace befitting his royal title. 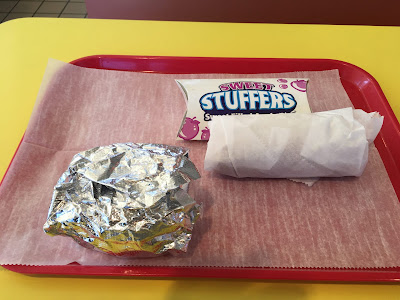 I took a seat while King Jimmy and his curia regis set to work preparing my order. While I was waiting, another customer came in from the nearby Mid-Ohio Sports Car Course and placed a $90 order to literally feed an entire racing team. I was concerned that the massive order would overwhelm the restaurant’s small crew, but my order came up before she had paid, and her order was ready before I finished my meal.


My tray was loaded up with a Wiener King Special, a southern style hot dog topped with chili, mustard, onions and coleslaw, plus a King Burger Deluxe, which fittingly enough resembled a Whopper in terms of size and toppings, and a fried apple pie, which turned out to be a Sweet Stuffers brand pie. Sweet Stuffers are seemingly a mainstay of broken chains everywhere. I’ve previously encountered them at Arthur Treacher’s and two different bootleg Burger Chefs.

The Wiener King Special was light on chili but heavy on coleslaw, but its taste was spot on, reminding me of the slaw topped chili dogs that are ubiquitous in the Carolinas. Likewise, the Kingburger was a perfectly serviceable fast food burger. What was really impressive, however were my surroundings.

It’s clear that efforts were made to preserve as much of the heyday of the Wiener King brand as possible. The menu board is a nicely preserved unit from the 1970s, and seemingly only the prices have changed. Old Wiener King employee name tags, paper hats, and print ads lined the walls. King Jimmy clearly makes efforts to preserve the endangered brand and his family’s legacy. The Mansfield Wiener King is the type of working fast food museum that I’m always delighted to stumble upon.

Local rumors and memes posted to the Wiener King Facebook page suggest that Wiener King owes its survival in the face of the closure of nearly all other Wiener Kings, and indeed many other fast food restaurants in the same part of town, to some connection to organized crime. It’s a rumor that King Jimmy perpetuates in good fun. In truth, the long term survival of the Mansfield Wiener King is the result of two generations of dedicated ownership by King Jimmy and his father before him. Long live King Jimmy and long live Wiener King.


Sometimes it makes me sad though, Wiener King being a broken chain. I have to remind myself that some restaurant chains aren’t meant to have hundreds of franchised locations. Their menu and decor are too special to be modernized into the increasingly bland and homogeneous fast food landscape. When you find a place like Wiener King, the part of you that knows it’s a sin to renovate an old mansard roof McDonald’s does rejoice, but still, the place you live is that much more drab and empty without a Wiener King nearby. I guess I just wish I had a Wiener King in my town.