Rippin' Off the Ritz?

If the analytics tool I use to monitor page views for this blog is correct, approximately 82% of the recent readers of Broken Chains access it from a device with an American IP address. Another 2% access Broken Chains using a device with a British IP address. One could make any number of educated assumptions based on this data, but the assumption relative to today’s topic is that approximately 84% of the recent readers of this blog are familiar with a character known as Dennis the Menace. What might surprise the average American or British Broken Chains reader is that Dennis the Menace is a name used by two similar, yet distinctly different characters on either side of the Atlantic.

Two separate cartoonists created each character, who share a name, a tendency to cause mischief, and a penchant for horizontal stripes. While American Dennis and British Dennis have a few differences, British Dennis is a few years older and is more of a troublemaker than his American counterpart who is younger and usually well-meaning, but inadvertently menacing. The similarities are striking. Surely, one must be an imitation of the other, right?


I make no secret for my love of the down, but not out G.D. Ritzy’s restaurant chain that once boasted 120 locations. My enthusiasm for Ritzy’s and their surviving locations was a major catalyst that drove me to start this blog in the first place, along with some strong encouragement from my friend, Cosmo Roadpacer. Last spring, I visited all six of the loosely affiliated surviving locations, plus a seventh that would open the following fall. Not long after that, I had a G.D. Ritzy’s logo tattooed on my right arm. I was predictably interested when I learned of a nearly extinct restaurant chain that used a similar name and seemed to predate my beloved G.D. Ritzy’s by several decades.


Ritzee Hamburgs in Battle Creek, Michigan is the last surviving location of a local chain that once had multiple locations in Battle Creek, plus a few others in nearby, Jackson, Grand Rapids, and perhaps also Kalamazoo during its 1950s heyday. Given that imitation runs rampant in the fast food industry, whether it be Kewpee’s influence on Wendy’s or Big Boy’s influence on the Big Mac and Big Shef, I was curious to see if Ritzee Hamburgs had any direct influence on the similarly-named G.D. Ritzy’s, which began in Columbus, Ohio in 1980, well after the heyday of Ritzee Hamburgs.


I found my way to Battle Creek early on a Friday evening en route southwest to Indiana. I parked in the shadow of the tall, angular neon sign advertising 79 cent burgers, and walked toward the imposing brown facade of the building adorned with hand painted signage. When I entered the building, it was clear it had received few updates since the 1970s. The booths were covered in harvest gold Naugahyde, and potted plants hung from the ceiling in macrame holders. That same ceiling was adorned with curious faux stained glass, faux skylights, while the floor was covered in the same faux woodgrain tile that I recall seeing in 1970s-built McDonald’s locations. The spartan menu board appeared era-appropriate to the rest of the dining room, and the drinks section included “imitation lemonade,” a drink just as authentic as the skylights. While the interior of Ritzee Hamburgs was equally dated as the practice of calling burgers “Hamburgs,” nothing looked to be alarmingly dirty or in disrepair. As with many of the places I visit, Ritzee was stuck in time.


I ordered up a Ritz cheeseburger with everything as well as an olive burger, plus fries. (I don’t especially enjoy olive burgers, but I encounter them frequently when traveling in western Michigan. I order and force myself to eat one every so often in hopes that they’re an acquired taste.) After ordering, I took a seat, and took a few minutes to bask in the anachronistic majesty of my surroundings. It was a brief bask, though as my food was delivered quickly to my table on actual ceramic plates.


I was curious if the burgers would bear any resemblance to those at G.D. Ritzy’s, and while both chains refer to their quarter pound burgers as a “Ritz” that’s where the similarities ended. The Ritz cheeseburger before me had a relatively thick, circular patty on a sesame seed bun. “Everything” at Ritzee means mustard, ketchup, pickle and onion. The fries were standard crinkle cuts, and the olive burger was… covered in green olives. While the food was decent enough, it was clear that G.D. Ritzy’s thin, irregularly-shaped, lacy-edged burger patties smashed flat on a ripping hot grill, on unseeded buns topped with lettuce, tomato, and mayonnaise in addition to ketchup, mustard, pickle, and onion had no direct relation to the burgers at Ritzee Hamburgs. Likewise, the crinkle cut fries at Ritzee had no resemblance to G.D. Ritzy’s shoestring fries. Ritzee also lacked the peanut butter and jelly sandwich, made from scratch ice cream, and Art Deco theme that make G.D. Ritzy’s feel fun and unique. Satisfied with the lack of similarity, I finished my meal, bused my table and walked out the door through the parking lot to my car, thinking there couldn’t possibly be a direct connection between Ritzee Hamburgs and G.D. Ritzy’s, when I saw it, another hand painted sign by the door featuring a fancy man with a mustache monocle, top hat and tuxedo who bore a striking resemblance to G.D. Ritzy’s mascot who wore a bowler hat, and in his earliest incarnations also had a monocle and mustache. Could the Ritzee Hamburgs fancy man have been the inspiration for the G.D. Ritzy’s fancy man? It at least seemed possible.

In the US, Dennis the Menace comic strips first appeared in newspapers on March 12, 1951. Across the Atlantic on the very same day, issue 452 of the comic book, The Beano were on sale at newsstands all over the UK, a few days ahead of their March 17th issue date. Those comics were the first to feature the British Dennis the Menace. That’s right, both Dennises the Menaces first appeared on the very same day on different continents, created by different cartoonists for different publications, none of whom knew about the other Dennis. By all accounts, it was a complete coincidence. These kinds of coincidences happen occasionally in the chain restaurant world, notably to Waffle House and Burger King. Based on my experience at Ritzee Hamburgs, it seems likely that the similarities in name and mascot were at least mostly coincidental.

According to Wiktionary, the word "Ritzy" describing something elegant or luxurious is an eponym derived from the name of Swiss hotelier César Ritz, founder of the high-end hotels known today as Ritz-Carltons. The name of both restaurant chains is therefore likely to have a common etymological ancestor in César Ritz. Additionally, the disappearance of the monocle and mustache from the G.D. Ritzy's mascot implies that the operators of that chain at least gained an awareness of Ritzee Hamburgs. I tend to assume the original G.D. Ritzy's was created with no awareness of the similar Ritzee mascot, after all, what makes a fellow look ritzier than a monocle and mustache? Adding them seems like a decision that was reached organically in the case of both chains. I do however, suspect that at some point G.D. Ritzy's management became aware of the pre-existing Ritzee Hamburgs mascot and removed the mustache and monocle from their own mascot to prevent the possibility of finger pointing or worse, litigation.

I was on my return trip from points west of Battle Creek with this post fully written in my head, when it occurred to me that I hadn't tried the 79 cent burgers advertised on the ancient sign out front of Ritzee. I stopped by as an afterthought to see how much burger 79 cents would buy in 2019, this time ordering via the drive thru. While the burger I received was a little light on meat and heavier than bread than is ideal, it has way more of both than what you'd find on a White Castle slider, which costs a few cents more. It's the ritziest sub-one dollar burger I've encountered in this decade, and like every other menu item at Ritzee Hamburgs, it's also completely unlike anything at G.D. Ritzy's, mascots aside. 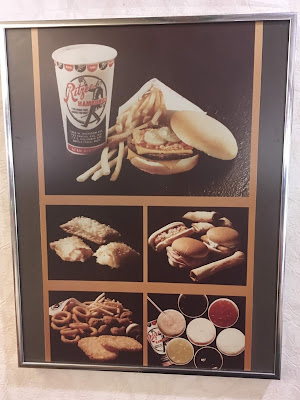 If you'd care to join me in an in person discussion over food that is strikingly similar to what you'd find at Arby's, consider coming to Raxgiving at the Harlan, Kentucky Rax this November. I'll be there to hang out with readers of Broken Chains in a thematically appropriate setting.

Posted by Zap Actionsdower at 5:46 PM