If one were reading back through the early posts of this blog, one would likely be stricken with a sense that the writer was in the process of figuring out what form the blog should take. Before I settled into the rut routine consistent format to which regular Broken Chains readers have become accustomed, I was throwing a lot of different types of posts at the proverbial wall to see what might adhere. There was the time I pondered in writing whether I should buy an appliance from the online retailer that calls itself Montgomery Ward, the time that I thought making tacos in my own kitchen was noteworthy enough to discuss at length, and who can forget the time I made three posts about a trip to every operating G.D. Ritzy's, when it really only needed to be a single post? (I was slow to learn my lesson, because I did the same thing with Ponderosa a few weeks later.) But of all my early blunders the one that stands out to me most today, is my failure to research the restaurant chain, Miner-Dunn when I first heard of them over 18 months ago.


Another of my haphazard early posts was built on the gossamer premise of a visit to a Starbucks that used to be a G.D. Ritzy's that was situated next door to a thematically and culinary similar Schoop's restaurant. It's a post I probably would not have written today, because it's at best, tangentially related to the theme of diminished chain businesses. Starbucks is obviously not a broken chain, and neither is Schoop's, which is a thriving regional chain operating primarily in Northwestern Indiana. However, in researching Schoop's, I found that the chain's founder was previously the owner of a Miner-Dunn restaurant, a fact that in my inexperience, I didn't find notable enough to remember, and promptly forgot. I only rediscovered it recently while preparing for a trip to the last operating Miner-Dunn location.

Harold Miner and Ralph Dunn opened for business selling hamburgers from a six stool counter in Hammond, Indiana in 1932, and quickly became a rare depression-era success. The single restaurant grew into a local chain in Northwestern Indiana, but slowly shrank to a single, beloved location open for business on US 41 in Highland, Indiana. I stopped in on a recent road trip to see what kind of experience the world's last Miner-Dunn had to offer.


I felt a pang of longing as I drove past the masterpiece of Googie architecture that houses Johnsen's Blue Top Drive-In a block north of Miner-Dunn, but near as I can tell, Johnsen's was never part of a chain, and therefore not right for the theme and consistent format I've cultivated for this blog over the past 20 months. I pressed onward, briefly until I found consolation in the glow of the tall vintage neon of the Miner-Dunn sign out front of the brick and wood shingled building. I promptly parked, and headed inside, noting the pushed-in brick in the side of the building where it had recently been struck by an errant SUV. As usual, I was running on eastern time in the central time zone, and I had shown up for lunch shortly after the restaurant's 10:30 AM opening time. Upon entry, I was promptly shown to a booth and provided with a laminated trifold menu.


I hadn't expected the menu to be so large. I had envisioned a depression-era burger joint that offered burgers and fries with little to no variation, and not much else. Instead, I was greeted with a large menu full of soups, salads, sandwiches, and a baker's dozen different burgers. I was unprepared for this, and told my attentive server I'd need a minute when she showed up to take my order. The menu had seemingly grown over the past 87 years, and included options as modern as a western bacon cheeseburger, a burger topped with nacho cheese, a Big Boy-inspired "Salad Burger" topped with lettuce and thousand island, and the Major Dunn which comes topped with an onion ring and fried egg. As enticing as these options were, I was seeking authenticity, attempting to order the burger a depression-era customer would have experienced at Miner-Dunn, promising to gladly pay Tuesday for a hamburger today. I lingered for a minute when I saw my culinary frienemy, the olive burger on the menu, but ultimately decided on the basic cheeseburger when my server returned. 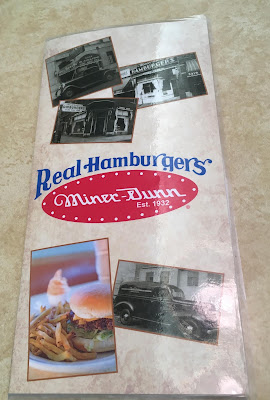 I ordered my cheeseburger with everything on it, which prompted the server to clarify if I wanted the "Miner-Dunn" everything. While Miner-Dunn offered a wide variety of burger toppings, a note on the menu specifies that in Miner-Dunn parlance, ordering a burger with everything will result in a sandwich topped with mustard, ketchup, relish, and onion. I took this to be a tradition that went back to the earliest days of the brand, and confirmed I did indeed want the Miner-Dunn everything. Using more jargon I had acquired from a thorough perusal of the menu, I also specified that I wanted it deluxe. At Miner-Dunn, deluxe means with fries and a serving of soft serve after the meal. Noting my expert order, my server disappeared and left me to bask in the hospital gown green aura of the Miner-Dunn dining room.


As with many places I visit, the decor was dated, but the building was clean and well-maintained. The Ford Explorer-shaped dent on the outside of the building was its only apparent imperfection. The edifice was immaculate aside from the scar of that recent calamity. The floral wallpaper and woodgrain surfaces inside brought back memories of the the kitchen in my granny Nova Scotia Actionsdower's house, which also boasted a floral sofa, harvest gold carpet and brown tile in the bathroom. Even the ketchup bottle on my table was the classic Heinz glass bottle that so many restaurants have shunned in favor of its squeezable plastic cousin. It was after a brief look around and a trip to the cramped, but sparkling clean bathroom that my food arrived.

The burger was of the smashed patty variety, with its crispy edges hanging over the edge of the plain white bun. Smashing a raw ball of meat on a hot grill is a proven method of cooking a large amount of hamburgers quickly, and I assume this method had been around since the beginning. The taste was the transcendentally beefy experience I hoped it would be, as the meat tasted fresher and more premium than anything one would find at a larger, more successful chain that claims to use fresh never frozen beef. I don't recall ever having relish on a burger before, but it's a habit I could easily see myself getting into, as the sweet-sour pickleish flavor offered a counterpoint to the mustard that rendered the ketchup redundant. The fries' irregular shape and curl revealed them to be made from fresh-cut potatoes, but unlike many fresh-cut fries, these had a pleasantly crispy outside, indicating that they had been not only fresh cut, but twice fried to ensure a crispy crust, no doubt just as they had been nearly 90 years ago before pre-cut frozen french fries existed. The perfectly prepared potatoes lent an additional air of historical authenticity to the meal.

When time came for dessert, I had the choice of soft serve vanilla ice cream, orange sherbet, or a swirl of the two. I opted for straight orange, and added a slice of pecan pie, which my especially helpful server offered to top with whipped cream. It was a suggestion which I emphatically accepted. She returned quickly, with a paper souffle cup overflowing with a K2-sized mountain of orange sherbet next to a slice of pie with an Everest-sized peak of canned whipped cream. I cleansed my palate with a few bites of perfectly acceptable sherbet before moving on to the pie.


Now, friends and neighbors, I fancy myself a pretty good baker of pecan pies. I use a variation of this recipe which I modify slightly, mostly by adding extra bourbon and using Stuckey's pecans when I can get my hands on them. I had long considered my own pecan pie to be my favorite, until I tasted Miner-Dunn's pecan pie. Whatever blend of brown sugar, butter, spices, and extracts they use is far superior to my blend of Old Grand-Dad and nuts from a gas station. The burger and fries were far above average, but the pie at Miner-Dunn will make it difficult for me not to stop in for a slice or two on future trips down I-94. It almost makes me wish I wasn't locked into the format of tracking the surviving locations of diminished chains so I could go off in search of more scrumtrulescent pie slices, but that very format is what makes my experience at Miner-Dunn so special.

Seeking out the remains of the diminished, struggling, and all but defunct brands has led me to experience all manner of good, bad, and ugly places, and in the face of bad and ugly, the good places seem better. Had I not experienced an incorrectly assembled breakfast sandwich at Grandy's, a microwaved Pillsbury biscuit at Horne's, or straight up food poisoning at Sirloin Stockade, I don't think I would appreciate finding a place like Miner-Dunn nearly as much as I do. Regardless of the quality of the food and experience, though, my primary goal is to experience and document the often overlooked glimpses into history that the locations of broken chains offer. It's the desire to find those experiences that guided me to this familiar format and away from making tacos and shopping for air fryers, and I wouldn't it any other way. 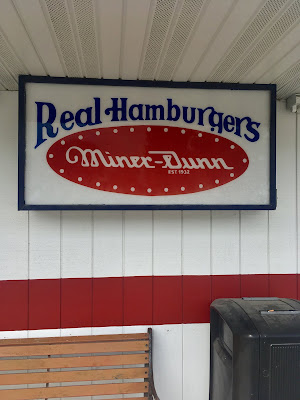 If you want to share a historic chain restaurant experience with me and other Broken Chains readers, then come join us for Raxgiving dinner in November at the Harlan, Kentucky Rax, the location that in my estimation, best exemplifies the 1980s heyday of the chain.

Posted by Zap Actionsdower at 6:12 PM