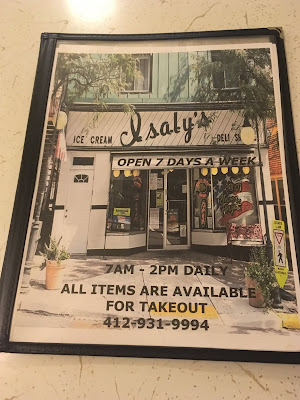 In my various silly adventures to surviving locations of broken chains, I try my best to find the essence, or at least what remains of the essence of the brand represented by each location. My curiosity and desire to document forgotten history motivate me to seek out the food and experiences that are represented by prickly, subjective, adjectives like “authentic” and “quintessential.” My success in finding the quintessentially authentic in the places I visit is varied. When circumstances allow, I try to visit multiple extant locations of the same chain to gain a well-rounded appreciation for the current state of a brand. However, in many instances, the lack of multiple surviving locations, and indeed my own limited time and resources prevents me from gaining the increased frame of reference that comes with stops at several outlets of the same brand.

I had been meaning to visit a couple places in Western Pennsylvania for months when I was afforded a narrow window of time to visit Pittsburgh on my way home from Johnstown, Pennsylvania where I ate at the last Pappy’s Family Pub. I had just enough time to stop just north of the city in West View at Isaly’s, one of around five survivors of a chain that once had over 300 units. Isaly’s, whose name rhymes with “fries, please” began with William Isaly whose chain of dairies spawned a chain of dairy stores which featured small restaurants. A loose corporate structure allowed the chain to expand rapidly, and by the early 1960s, Isaly’s locations were spread from Pennsylvania to Iowa. Isaly’s was known for its “chipped-chopped” ham sandwiches, "skyscraper" ice cream cones, which featured a tall, conical scoop of ice cream perched atop an ice cream cone, mirroring its shape. Advertising often used the mnemonic “I Shall Always Love You, Sweetie” to help customers remember the correct spelling of Isaly’s name. Most notably, however, Isaly’s developed an ice cream novelty that consisted of a square of vanilla ice cream covered in chocolate and wrapped in foil, the Klondike Bar, which has a fascinating history all of its own. Eventually, Isaly’s fell victim to the same loose corporate structure that had allowed it to grow so quickly. A lack of consistency and corporate oversight, coupled with widespread changes in the dairy industry caused the chain to shrink rapidly in the 1970s. The city of Pittsburgh had long embraced the Isaly’s brand to a greater extent than other markets, and the Pittsburgh area today is where three of the five remaining Isaly’s locations remain open. All remaining locations using the Isaly’s name seem to operate largely independently. While there wasn’t an abundance of consistency between Isaly’s locations in their heyday, there seems to be even less today.


My schedule was tight, and I could only visit a single Isaly’s location. I pored over Google Maps photos of each Pittsburgh-area Isaly’s, eventually deciding to visit the West View location based on the photos I found of its nicely-preserved interior. Surely, I could get a authentically quintessential Isaly’s experience in West View. I found my way into town on a Saturday morning. Isaly’s is situated on a quiet street lined with small storefronts on the ground floors of two and three style buildings in an old, but still vibrant neighborhood. I parked on the street at the end of the block and walked half a block uphill to Isaly’s. Following an ownership change a few years ago, the official name of this location was changed to the “I Shall Always Love You, Sweetie” mnemonic, but the sign of the building remained unchanged except for a period after each letter to reflect that it was an abbreviation for the full name. What awaited me past the minimally modified sign made good on Google’s promise of a time warp interior.


Original light fixtures hung from an ornate tin ceiling. Vintage Isaly’s signs and advertisements lined the walls. The tile floor was nearly identical to the tile floor in the bathroom I had when I lived in an apartment building that was built in 1937. While there were reminders of modernity here and there, it was clear that the owners of the West View Isaly’s had a deep appreciation for the brand’s history and wanted to share that appreciation with clientele. I could at least rest assured that I had found the most  authessentially quinthentic Isaly's dining room. I eschewed the modern tables and chairs and settled into an old built-in booth with an ancient Formica tabletop.

A server appeared with a printed menu whose cover contained more allusions to the legacy of the Isaly’s brand. I decided then and there to order breakfast, and follow it up with ice cream to make the most out of my only planned Isaly's meal. Isaly’s specialty chipped ham was available as a breakfast side, so when I my server returned I ordered the pecan pancakes I always seem to end up ordering when I can, along with a side order of ham.


While waiting for my order to arrive, I played a word game with myself, trying to come up with other backronyms that could be represented by the constituent letters of Isaly’s. My fondness for raw denim nearly immediately led me to “Indigo Should Always Line Your Shins.” My cursory knowledge of former Cincinnati Bengals fullback Elbert “Ickey” Woods’ signature celebratory end zone dance resulted in “Ickey Shuffle Always Leaves You Sore.” Finally, I broke out the thesaurus app on my phone to string together a mnemonic to help me remember either Kentucky’s first governor, or the state where country musician Dwight Yoakam was born, but not both facts. “Isaac Shelby Antecedently Led Yoakam’s State.” I was pondering a fourth acrostic that involved iodine salve when my food showed up.


The pancakes came with individual cups of imitation maple syrup like you'd find at a continental breakfast at a mid-priced hotel, but the cakes themselves were fresh off the griddle and delicious. The ham was exactly what I expected, deli ham warmed up on the grill, but it was good quality ham that provided a salty counterpart to the sweet pancakes. I'd get it again, even if it wasn't the arithmetically quasquicentennial breakfast side of Isaly's. I was so busy pondering the flavors and significance of the briny, porky, historic, breakfast protein, that I didn't notice my server drop off my bill. Since my arrival the place had started to fill up, and the staff were busy tending to other customers. Not wanting to inconvenience the busy staff or stand out as a tourist in the busy neighborhood restaurant, I decided, in the moment to skip the ice cream and continue on my journey home. It's a decision I regret.


Since my visit to Isaly's, I haven't had an opportunity to go back to try the ice cream at that or any other locations. I haven't even had a chance to visit one of the handful of Pittsburgh-area grocery stores that I learned too late carry Isaly's branded ice cream. Indeed, all my recent travels and upcoming posts have led me to travel west from my Metro Detroit home, not east. I've had to settle for the occasional Klondike bar from my local Meijer for my Isaly's ice cream experience, but Unilever has been the sole producer of Klondikes since 1993, and my Eastern Ohio born and raised mother tells me that the modern Klondikes don't taste anything like Isaly's Klondikes did in the sixties. My Isaly's experience, while uniquely retro and historically hammy, falls short of feeling quintessential or authentic without ice cream, but that's something I'll have to live with for at least a few months until I get back to Pittsburgh. 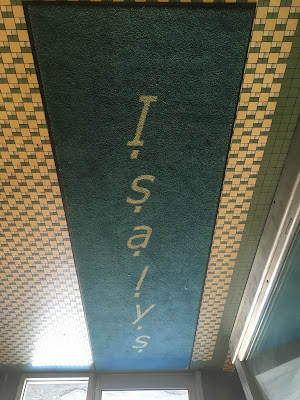 One of the many reasons I can't get back to Pittsburgh for Isaly's ice cream any sooner is that I'll be at Raxgiving at the Harlan, Kentucky Rax in November. If you're a fan of Broken Chains, the blog, or broken chains, the surviving locations of mostly defunct restaurant and retail chains, consider joining me for a meal and informal conversation.