When Alessandro Moreschi died in 1922, an uncomfortable chapter of history died with him. Moreschi was the last of the castrati, male singers who were castrated before puberty to preserve their childlike singing voices. Castrati were popular performers in Europe from the Renaissance until the Industrial Revolution when governments and religious institutions banned the practice. Moreschi lent his vocal talents to the Sistine Chapel choir for three decades, performing well into the twentieth century, and is the only castrato to have been recorded performing solo. Recently, I couldn't help think of Alessandro Moreschi as I was dining a restaurant named for a castrated bull that is also the last surviving example of its kind.

The Lucky Steer restaurant stands just off I-75 in Wapakoneta, Ohio. It is the final outlet of a small chain restaurant empire concentrated mainly along the Indiana-Ohio border. I was tipped off to its existence, and indeed the one-time existence of the Lucky Steer chain via email by a reader. (Thanks Map Cat!) Mentions of the Lucky Steer brand online are scant, and a definitive outline of its history is nowhere to be found. The closest I can find is a forum post by a person claiming to be the founder's son. His story details chain beginning in 1945 when Guy Scheib opened the Humpty Dumpty drive-in in a converted gas station in Fort Wayne, Indiana. The restaurant, run by Scheib and his sons, was an overnight success in post WWII Indiana, and they quickly began expanding, changing the name to Happy Humpty along the way, as the Humpty Dumpty trademark was unavailable. Lucky Steer was launched as a more upscale sister chain to Happy Humpty at some point in the sixties, offering a steakhouse-like menu, with indoor seating and table service. At the peak of operations, there were around 23 company-owned restaurants in the two brand chain. Downfall came abruptly, according to the forum poster, when a business partner muscled Scheib out, and proceeded to mismanage the Happy Humpty and Lucky Steer brands, bringing about massive closures in the early to mid eighties. The only surviving location was the Lucky Steer in Wapakoneta. The cover of the menu at the lone surviving Lucky Steer tells the rest of the story. It had been a Happy Humpty at one point, before being converted to a Lucky Steer location, which was purchased by a former Happy Humpty/Lucky Steer regional manager in 1983. It's still owned by the same family today.

I arranged to stop there for a quick bite on a recent weekend trip. Admittedly, I wasn't in a great mood. Following a disappointing dinner the night before, I was ready to be home. I also was not especially hungry, thanks to a lovely breakfast prepared by my Airbnb hosts that morning. Had I not been in the vicinity of Lucky Steer, I would have driven straight home. I had perused the Lucky Steer website a few days before, and found that the menu had evolved a bit from the initial steakhouse concept, and was now more dinerish in terms of offerings and price point. I stopped in late on a Sunday morning, figuring on adhering to a hobbitlike meal schedule that day. I had skipped second breakfast, and it was time for elevenses. I parked under the zigzag roof canopy, no doubt a Googie artifact of the site's Happy Humpty days.

Predictibly, the place was packed, and the crowd seemed roughly evenly split between adults over 70, all of whom seemed to have colds, and children under five, all of whom also seemed to have colds. I was shown past the large, airy dining room with a high vaulted ceiling and massive window looking out toward the street, to a secondary room, with few, if any windows. I was seated at a small table in the middle of the proverbial action. A large family was seated a couple of tables away, and I cringed as a woman asked for a cup of ice, then proceeded to pour her glass of chocolate milk over the ice, and slowly sip it, allowing the beverage to be slowly diluted by the melting cubes. A group of waitresses idly chatted with a customer who they seemed to know, while they blocked the kitchen door. Various children with oozing nostrils ran about unsupervised, making various ear-piercing noises as they frolicked. I didn't dare go near the salad bar.

When my waitress fought her way through the crowd, I ordered a Lucky Skillet, a breakfast skillet concoction with a base of some manner of fried potato product topped with vegetables, eggs, and sausage gravy. Learning my lesson from Country Kitchen, I specifically asked for my eggs over easy, to which my waitress replied, "You mean instead of scrambled?" Apparently here, like at the Country Kitchen in Hannibal, Missouri, eggs are scrambled by default. After taking my order, my waitress returned a few minutes later to inform me that the kitchen was out of "Chunkies" and asked if I'd like hash browns or home fries in my skillet instead. Not knowing what chunkies were, and having heard the terms hash brown and home fry used interchangeably to describe every manner of fried potato that's not a french fry, I asked for hash browns. This appears to have been the wrong answer, because my waitress gave me a funny look before disappearing into the kitchen.


When my skillet arrived a few minutes later, it was piping hot, and entirely edible, if a bit heavy on gravy. In retrospect, I should have ordered biscuits instead of toast. The hash browns appeared to have been made from freshly cut potatoes, but were buried under layers of mushy gravy and eggs. I suspect it's better with chunkies, whatever they are. I finished eating quickly, paid my bill and left, slightly underwhelmed by my breakfast, but immensely put off by the atmosphere. I can't blame the restaurant for being busy at the brunching hour on a Sunday, but my own personal quirks include a strong aversion to crowds in general, and small children in particular. Lucky Steer had plenty of both. I drove off, planning a blog post in my head, the crescendo of which was set to be some quip about the steer being lucky because his inability to reproduce prevents him from being surrounded by a herd of calves with runny noses.

In the days following my visit to Lucky Steer, however, a feeling that I had not been in the right head space to give them a fair shake began to creep into my brain. I see myself as more of an amateur historian than a restaurant critic, and try, moderately successfully, not to be unfairly critical of the places I visit. Plus, I saw that they had a double deck burger, known as the Lucky Burger, on the menu that intrigued me. Pictures I found of Happy Humpty locations I found online advertised a blatant Big Boy knockoff burger called the Big Guy. I strongly suspected the Lucky Burger was a clone of the Big Guy. 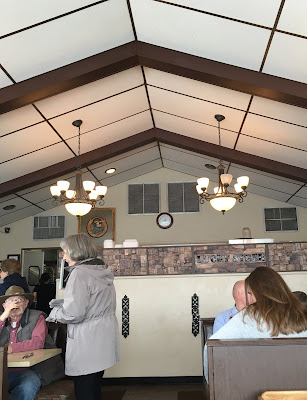 My second visit to Lucky Steer was also on a Sunday, but this time it was early afternoon. The place was just as crowded, but this time the age range of the clientele was distributed a bit more evenly, and the coughs, sneezes, and visible mucus had drastically decreased. I was delighted to be seated in the main dining room by the large window that makes up the building's glassy front facade. My Lucky Burger and fries came out quickly, despite the busy dining room.

I could find no accounts of the constituent ingredients of the Happy Humpty Big Guy hamburger, but I suspect it would have been topped with some form of tartar sauce, considering Happy Humpty shared its territory with both Frisch's Big Boy and Burger Chef, both of whom topped their double deck burgers with proprietary tartar sauces. If I'm correct, my Lucky Burger was not an authentic Big Guy, as it came with a Thousand Island-based sauce. It was also a bit smaller than I anticipated, but then again, so is a standard Big Boy, a relic of the Depression when meat was scarce. Despite its diminutive size, the Lucky Burger was a pleasant experience. It's patties were lightly charred on the edges, producing a light crunch, while the insides were still pleasantly juicy. The three piece bun had sesame seeds on all three pieces, the way Big Macs did at some point before my birth, according to old print ads and commercials I've seen. As a result, for the first time in my life, I actually got a hint of sesame flavor from a sesame seed hamburger bun. As with my breakfast, the price of my meal was more than reasonable. Including a Diet Pepsi and tip, I ended up paying just over $10. I paid more for lunch at my local Subway today.

When Alessandro Moreschi's voice was recorded, he was in his mid-forties. At the time, he was considered by even the most generous critics to be past his prime as a vocalist. Regardless, the recordings survive today, and act as a window to a time when standards of both musical taste and ethics were remarkably different than they are today. The Wapakoneta Lucky Steer functions similarly. While its menu has evolved over the years, and bears little resemblance to the initial Steakhouse fare or the drive-in offerings from Happy Humpty, it stands as our last window to a pair of nearly forgotten regional restaurant chains that are otherwise largely lost to history. I'm glad to have had a couple of Lucky Steer experiences. I'll probably return on one of may countless trips up and down I-75, provided they aren't terribly busy.
I apologize if the references to castration made anyone reading this uncomfortable for any reason. I promise it's a theme I won't discuss again, unless maybe I happen to find a Western Steer Family Steakhouse still open for business somewhere.
Posted by Zap Actionsdower at 9:08 PM

Email ThisBlogThis!Share to TwitterShare to FacebookShare to Pinterest
Labels: I-75, Lucky Steer, Ohio