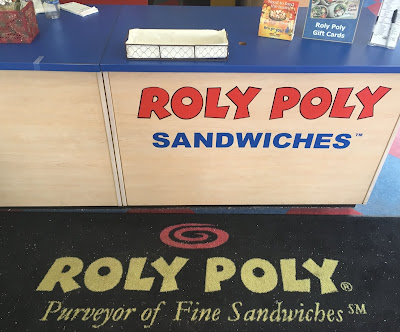 The mid nineties were host to a sudden barrage of franchised sandwich shops. It was nigh impossible to visit a strip mall or food court that didn’t have a Subway or Blimpie location. Low franchise fees and minimal building, equipment, and staff requirements meant that it was relatively easy for a business-minded individual to open and successfully run a chain sandwich joint. Like most fast food fads, there were plenty of smaller players that also wanted in on the action. The year 1996 was an eventful year for the city of Atlanta, Georgia. The city was hosting the summer Olympics and dealing with the associated influx of people from around the world there to participate in, run, and bear witness to the event. That same year, a sandwich chain was founded in Atlanta that was brave enough to ask the question, “What’s so great about bread, anyway?” Linda Wolf and Julie Reid opened the first Roly Poly location in Atlanta’s Buckhead neighborhood, which I suspect is adjacent to the Beavis District. Both Wolf and Reid had previously operated their own independent sandwich shops that entirely eliminated traditional bread, and instead served wrapped sandwiches, with traditional sandwich ingredients rolled up in tortilla-like wraps. Their new concept, Roly Poly was designed from the ground up for franchising, following a similar model to Subway and Blimpie that allowed franchisees to operate out of existing structures, typically strip mall slots. The ‘90s sandwich boom was kind to Roly Poly, and the chain had grown to 170 locations by the early 2000s.

The chain shrunk considerably in the ensuing years, and I can find little information as to why, but I suspect the 2008 recession and competition from second wave low-overhead sandwich chains like Jimmy John’s had a lot to do with it. The Roly Poly website “About Us” section claims there are 125 locations open in 24 states, but a quick look at their list of locations indicates that claim is outdated. Their true count today is closer to 44 locations in 13 states, and more than half of those locations are in Georgia, Alabama, and Louisiana. The remaining locations are spread thinly from Texas to Connecticut. 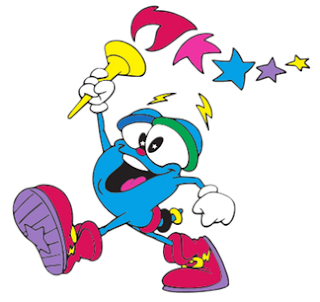 Like my memory of Izzy the Whatzit, the 1996 Olympic mascot, my memory of Roly Poly is fuzzy at best. I remember briefly encountering one growing up in Lexington, Kentucky. It was 2000 or so, and I was an angsty teen suffering the embarrassing fate of running errands with my mother, Judy Actionsdower. We stopped at a strip mall for lunch, and when my mom suggested we dine at the Roly Poly in said strip mall, I scoffed at the prospect of being seen sharing a meal with my mother, and instead asked her for money so I could eat at the A&W next door by myself while she ate alone at the Roly Poly. Clearly, I was a delight as a teenager. That was the closest I ever came to having a Roly Poly meal, and that location, along with all the others in Kentucky was gone not long after that.

The better part of two decades later, I’m a (relatively) content adult with a reasonably healthy and amicable relationship with my parents, and I got curious about the current state of Roly Poly, the way I often do about various diminished restaurant chains. I did a little research, and found two locations within relatively reasonable driving distance, and set off to see what the surviving locations of the chain had to offer so many years after their heyday. 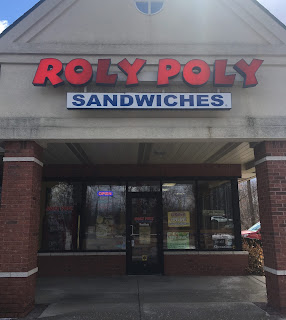 Grand Blanc, Michigan is one of those towns that has consistently provided me with interesting places to visit and write about. I’ve previously visited both a Dawn Donuts, and a Kewpee-descended Halo Burger location in Grand Blanc. I was excited to be back again for my first-ever Roly Poly experience. It was lunchtime on a Saturday when I got to the strip mall housing the Roly Poly. I was surprised to find only one customer other than myself there. A woman I took to be the manager was finishing up taking a phone order when I walked in, but I needed time to browse the menu anyway. 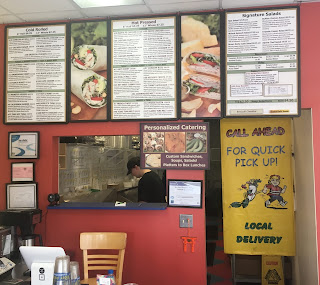 The Roly Poly menu board is massive; a literal wall of text describing each of the numerous rolled sandwiches on offer. Each sandwich has a number, but confusingly the numbers are non-sequential, and they range from 3 to 160 with wide gaps in between. Logic and cursory research reveals no apparent reason for this scattershot numbering system. I ended up ordering number 59, a chicken pesto wrap, and I opted for the whole rather than half, the equivalent of a Subway footlong as opposed to a six inch. I got my chips and drink and sat down.

I had half expected my wrap to be prepared in front of me like a Subway sandwich, Chipotle burrito, or like the burgers I get at Harvey’s on the rare occasions when I find myself in Canada. Instead, the kitchen at this Roly Poly was walled off, with only a small pickup window connecting it to the dining area. I peeked through the window, and found three or four employees working the surprisingly large kitchen. Despite the empty dining area, all seemed to be busy. I wondered what they were up to, and how the place could stay in business with minimal clientele and such a large staff. It was then that I noticed the numerous signs around me advertising catering services. This gave me the impression that the restaurant thing was just a side hustle, and that this Roly Poly’s main gig is catering events, showing up with big party trays full of wrapped sandwiches.

My order was delivered to my table not long after that. The wrap was about the size of a Taco Bell Grilled Stuft Burrito if it were cut into two pieces. Like the GSB, it had been toasted on some George Foremanesque grill. I gave it a taste, and found it perfectly pleasant with the expected chicken, pesto, sun dried tomato, and cheesy goodness that was promised by the lengthy description on the menu board. 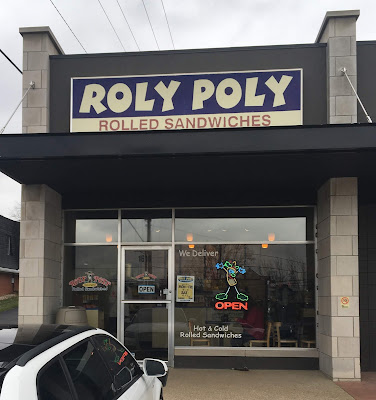 This location was also in a strip mall slot, as I suspect most, if not all Roly Poly locations were/are. The dining room there was incredibly small, with no more than eight tables crammed into what was essentially a wide corridor between the kitchen, single restroom, and wall. It was a little before 11 AM on a weekday, but this place was a little more lively than the last. There was a customer in front of me in line, and another employee was leaving with a delivery order.


I had some other blog-related food stops planned that day, so I only ordered a half wrap. This time, I went with a cold wrap, known as the Roly Pounder. An employee emerged from the clandestine kitchen and delivered it to my table a few minutes after I had ordered. The Rollie Pounder was not unpleasant in its blend of flavors, but the pickle spear running through the middle of it overwhelmed the rest of the ingredients a bit. In general, it seemed heavy on vegetables and light on meat and cheese. The menu promised turkey, ham, cheese, and bacon, but the bacon seemed to be missing. Bacon would have made it better, but not so much so that I saw fit to complain. I will complain a bit about the price though. Somehow I ended up paying eight bucks and change for a wrap with very little meat that I ate in four bites, plus chips and a drink. I didn’t see the appeal of this particular sandwich, but if I were at a catered event with a pile of them on a tray, I guess I wouldn’t complain. Maybe they’re cheaper in bulk.

Two or three more customers came in and ordered while I was eating, and a guy that seemed to be the manager mentioned their catering service to both of them, even saying that catering was their thing. From my unique perspective, it seems like the appeal of a restaurant that makes wrapped sandwiches is limited, but since the sandwiches travel well, can be eaten with one hand by party goers, and are easy to make quickly and in large quantities, the concept lends itself well to catering, and the Roly Poly franchisees that are still in business seem to have become caterers first and restaurateurs second. There’s nothing inherently wrong with this, but I’d like to see Roly Poly thrive as a restaurant chain. I think that perhaps, I have a plan to make it happen.


Roly Poly came into existence at the peak of the sandwich shop fad, which has since faded considerably. Restaurants with menus based on chicken strips are a present-day fad, especially in the south, where the majority of Roly Poly locations are operating. Thanks in part to a generation raised on boneless chicken, chains like Zaxby’s, Slim Chickens, and Raising Caine’s are wildly popular these days and quickly growing. Roly Poly locations seem to have large kitchens that could easily accomodate a few deep fryers. They should, of course keep, the wrapped sandwiches on the menu to continue with the successful catering businesses that franchisees have established, but some fried chicken tenders, perhaps marketed as chicken fingers, would bring a new crowd into the restaurants.

The chain should change its marketing, and perhaps its name to indicate the revamped menu, but the new name shouldn’t alienate the current customer base. It therefore makes sense to keep the Roly to indicate they still sell rolled sandwiches, but they should drop the “Poly” and replace it with “Fingers” to tell the world that they now sell chicken fingers. They should then, naturally, hire retired Major League pitcher and active mustache enthusiast Rollie Fingers to be the celebrity spokesman for the newly-branded Roly Fingers. Not to toot my own horn, but it’s the cleverest bit of pun-based celebrity restaurant spokesmanship I’ve come up with since I suggested Geddy Lee from Rush should endorse Spageddie’s. Like Geddy Lee, Rollie Fingers has a distinctive look that would stand out on a corporate logo, and he’s retired, and therefore probably not busy. Plus, if Colonel Sanders has taught us anything, it’s that elderly men with unique facial hair are great at selling chicken. Roly Fingers locations could even hand out false mustaches with kids meals the way Uncle John’s Pancake House used to.

I’ll admit the idea started with a pun, but it sounds better the more I think about it. Boneless fried chicken lends itself well to being wrapped up in a tortilla with other toppings, so chicken fingers seem like an obvious addition to the Roly Poly menu. And with the ever-growing popularity of chicken fingers, and by maintaining the current low-overhead, small footprint philosophy of Roly Poly locations, Roly Fingers could grow quickly, perhaps returning to, or exceeding its initial maximum location count. This would give them a leg up on the established chicken finger chains as well, which usually operate out of larger, more expensive, freestanding structures.

Linda, Julie, if you’re reading this, you can have the Roly Fingers idea for free. I’d be delighted to see the sandwich chain you founded experience a second act as a sandwich and chicken chain. If you’re successful, you could even hire character actress CCH Pounder to do a commercial where she and Rollie Fingers get married and he changes his name to Rollie Pounder. Just don’t forget the bacon.

Posted by Zap Actionsdower at 12:26 AM