For the first time ever, Broken Chains has a guest author. Today's post was written by Mike from Houston Historic Retail. Enjoy! 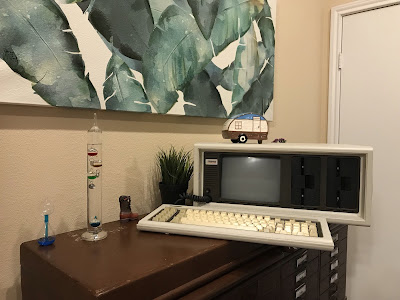 One of the very first computers I had the pleasure of using was a Compaq Presario. In the early ‘90s, Houston had quite the affinity for Compaq. The company was headquartered and operated out of Houston. Many local school districts and companies maintained exclusive contracts with Compaq up until their takeover by Hewlett Packard, and some even continue those contracts with HP. To this day, HP maintains a significant presence in the Houston area. Compaq’s history is not that different from many tech startups of the present-day. Some managers working for Texas Instruments (Yes, the TI-83 Calculator people.) decided to branch out on their own. Without an office to plan in, they met at House of Pies and drew their initial sketch of the Compaq Portable on the back of a place mat.

The “House” at the front of the restaurant was a common feature to most House of Pies Locations. An interesting story in and of itself, the Compaq tale is just a side note in the history of House of Pies. When you first visit House of Pies, you get the feeling that you’ve seen a building design like this somewhere else before. The building is tall, long, and pretty thin. With these design requirements, it quite resembles the Original IHOP building design.


The signage featured on the exterior of the building is presumably newer. It drops “The Original” from the name. Walking up to the restaurant, you can almost feel the age ooze from the building itself, channeling itself through the dank humid Houston air, transmuting anyone who enters the parking lot into an honorary senior citizen. With this show of age, the hallmarks of a broken chain begin to appear. Which brings us to the discussion of what exactly was The Original House of Pies. Al Lapin Jr. a restaurateur most famous for his earlier chain IHOP, founded House of Pies in the mid sixties. Both chains were owned by International Industries, a company held by Mr. Lapin, and were originally seen as sibling brands.


I came to House of Pies in the mid-afternoon on a Sunday. I had expected it to be quite busy especially with the after church-crowd. However, to my surprise, it was only moderately busy. I had no wait to be seated, and the entire time I was eating there was no wait for a table until well after I had ordered pie. Partly this was thanks to the staff for turning tables quickly, as well as a “Table Service Fee” of $3.50 per person per hour for any customers who fail to meet that minimum in food ordered.


I perused the relatively extensive menu complete before finally being greeted by my server. I considered what exactly I wanted to get. Back a few years ago when House of Pies was a regular haunt for me I generally ordered the Eggs, Potatoes, and Chopped Steak. It was a great amount of food for under $10, and there were never any issues with the taste. However, to help better represent what House of Pies has become since splintering I chose the decidedly Texan Eggs, Potatoes, and Chicken Fried Steak. When my waitress approached me I was able to put in both a drink and food order at the same time, saving an extra step.


While waiting on my food to arrive, I had some time to ponder the history of the chain. While I can’t find an exact number of restaurants opened, conservative estimates place it around 40. Like IHOP, they were originally a West Coast phenomenon, eventually branching out to places like Denver, Chicago, and obviously Houston. The chain experienced about ten years of growth before International Industries (The Company Al Lapin formed to run his restaurant brands) was sued by a group of franchisees who specified that they were being overcharged for supplies. In the mid-1970s, the chain was liquidated, and many franchisees became owners. From here the history gets extremely hard to track but the take-away is that without any corporate structure, the restaurants were left on their own. Today, four locations remain open, three in Houston, and one in Los Angeles.

Midway through reminiscing about a past I never experienced, my food showed up. Everything looked delicious and fried. I quickly disposed of the garnish. After all, Texas didn’t fight for its independence from Mexico for me to eat rabbit food on the Lord’s day! Using the table-supplied Tabasco to spice up my eggs, I dug in. Everything on the plate was delicious. I truly couldn’t remember the last time I had been to House Of Pies, but the quality had not declined. The only exception was the eggs, which were slightly overdone and definitely needed the help of some spice.


When I dine out, it’s a rarity for me to finish a meal. Usually, I box up around half of my food and finish it a few hours later. After skipping breakfast this Sunday morning, I was more than inclined to finish not just all my food but to order up some pie as well. My waitress took my order of strawberry rhubarb pie to the front counter where the restaurant’s bakery is. In the meantime, I got up to wash my hands and check out the bathroom. After finding it to be pretty standard, though tiny, I returned to the dining room.


Although difficult to make out in this photo, House of Pies maintains a very small dining room. All in all, I would assume they could hold about 75 people. Most booths have four person seating. There are no chairs except for a few that are permanently connected to the limited bar seating.


Getting back to my seat, I quickly finished my slice of pie. Not needing my usual to-go box, I was delivered my check. Which was an odd combination of handwritten slip, that had obviously been passed through a receipt printer. This technology was likely added later in life, as these locations opened in the late sixties.


Making my way to the front, I snapped a couple of pictures of things I had missed on the way out. Unfortunately, the rising traffic meant I couldn’t get a picture of the front counter bakery.


I could only get a picture of the bottom half of this sign. The top half has a huge rotating piece to indicate if it is self-seating or not. The other Houston location has one, but I’m not sure that these signs were original to the building.

Overall I had a good experience, without getting to visit the Los Angeles location, I’m not exactly sure what has deviated over the years, but I’m sure things have. What sells in Houston doesn’t always sell in Los Angeles, and to add to that, House of Pies definitely sells in Houston. Within the past year they have opened two new locations, both former locations of newly-broken chain Black Eyed Pea, but that’s a story for another blog post.
Posted by Zap Actionsdower at 6:30 AM