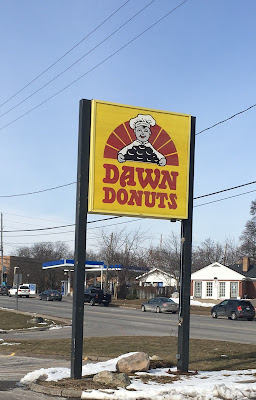 I hate the spelling of the word "Doughnut." Writing comes easily to me most of the time. When I'm composing blog posts here, I seldom experience writers' block, but taking the time to include the entirely unnecessary G and H in the middle of the word is sure to break my concentration and result in substandard prose. Since the subject of this post is a chain specializing in the manufacture and sale of the aforementioned breakfast treat, I'm sure to be using the word repeatedly. Rather than try and dance around the use of that word, I'm going to do what many businesses have done before me, and use the colloquial spelling, "Donut." I apologize if this irks any spelling and grammar aficionados, but I don't think I'd be able to compose an entire blog post repeatedly using the correct spelling without it having a dramatic effect on my enjoyment of the Sunday afternoon during which I am writing this. Also, I've never heard of spell check.

The donut shop is a genre of business that seems to be slowly going extinct. Places that specialize in fried dough coated in sugar feel out of step with a health-conscious world. The more successful donut places tend to downplay their fattier offerings and market themselves as purveyors of coffee drinks instead. Tim Horton's, a donut chain that exists all over Canada, and some select US markets including my own, has called themselves a "Cafe and bake shop" since 2011, de-emphasizing their donut shop image. Dunkin' recently followed suit and dropped the "Donuts" from their name to much media attention. With the modern unfashionable image of the donut, it's no surprise that there are a good many donut chains that long ago crossed the Cici's point to become broken chains.

Arthur Hurand opened the first Dawn Donuts in 1958 in Flint, Michigan, and the chain grew slowly to a size somewhere north of 60 locations in Michigan and surrounding states by the mid eighties. The name referred to the time of day when bakers would have to work to make sure donuts were ready in the morning. (Near as I can tell, Dawn Donuts never offered a donut filled with the eponymous dish detergent in place of jelly or Bavarian creme.) Many locations built in the sixties had distinctive zigzag pointy roofs. I lovingly refer to these buildings as pointybois. Dunkin' Donuts bought out Dawn Donuts in 1991, and converted a good many of the company-owned pointyboi buildings to Dunkin locations, just as many Zantigos became Taco Bells a decade or so earlier. The terms of Dunkin's buyout of Dawn Donuts allowed remaining Dawn Donuts franchisees to remain in business under the Dawn name. Of the eight independent Dawn Donuts locations that existed at the time of the Dunkin' buyout, two still exist today. Sadly, as of 2013, neither location operates out of a vintage pointyboi.

Edit: I've been informed that Dawn Foods, the corporate entity behind the Dawn Donut shops existed as a corporate entity as early as 1920, and still exists today. You can read more about them here.

Located in Flint, the birthplace of both Dawn Donuts and Kewpee, the last pointyboi that operated under the Dawn Donuts name was bulldozed and replaced with a modern building that houses both Dawn Donuts and a Subway location. Google shows there's still a vintage sign out front, but the look of the building was too bland and modern for me. I opted instead to visit its sister location down the road in Grand Blanc. While not a funky midcentury pointyboi, the Dawn Donuts in Grand Blanc had a decidedly late 1980s appearance that I thought might provide an immersive experience. I wasn't disappointed when I visited.

Esmeralda Fitzmoster and I stopped by the Grand Blanc location yesterday morning for a quick unhealthy breakfast to kick off a weekend of unhealthy eating and were pleased to find a charmingly dated atmosphere. The menu boards looked like they had been brand new at the time of the Dunkin' buyout and were never changed. Seating in the dining room was in the form of built-in half booths with integrated chairs, similar to the units at the Taco Tico locations I grew up with. It was clear very little had changed here in a good 25 to 30 years. We ordered up half a dozen donuts from the glass case that composed the order counter, and took a seat.


I ordered my normal go-to donuts. I've listed my impressions of each below:

To the average observer unfamiliar with the history of the brand, the surviving Dawn Donuts locations likely look like independent neighborhood donut joints, which they essentially are at this point. Without distinctive pointyboi architecture evoking a the spirit of a corporate image, my visit to Dawn Donuts felt like half of an experience, and while neither Dawn Donuts is in a pointyboi, there are still pointybois standing in the area, operating under different names. Thanks to demographic makeup that leads to this particular region having a strong donut culture, and an odd phenomenon of donut shops remaining donut shops after they change ownership and brands, quite a few of the surviving pointybois still house donut shops, including a single remaining Dunkin location in Jackson, Michigan. Rather than visiting a Dunkin' Donuts, though, I opted instead to visit the similar, but legally distinct, Don's Donuts, a pointyboi, former Dawn Donuts just outside of Toledo Ohio. 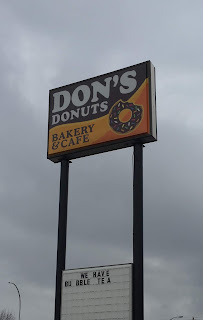 Even in a slightly seedy neighborhood full of older buildings, the distinctive roof of Don's Donuts stands out. The angled entryway extends the theme of diagonal lines to the user's experience with the building. Once you're inside though, the layout is conventional, with a backward L shaped counter dictating the shape of the dinning room. The walls are plain painted cinder blocks with an institutional feel, like a cheaply-constructed roadside motel from the fifties. Everything about the place feels like a time warp, from the glass case of freshly prepared donuts at the order counter at the top of the L to the two U-shaped counters at the base of the L, flanked by low stools trimmed with bright orange imitation ostrich skin. Even the counter tops seem to be original, as they sport a well-worn floral pattern clearly from the early sixties.

I stopped by and purchased a couple of the unremarkable donuts from the glass case so I could sit and loiter for a few minutes and appreciate the untouched atmosphere of the distinctive, remarkably intact, historical building. An older man behind the counter, who I took to be the owner of the place, was chatting with some regulars during my visit, and complaining about low property values in the area. Ironically, it's likely those very low property values that have kept the place running in its original form for so long. If the land it was sitting on was worth more, this endangered pointyboi would have long ago been leveled and replaced with some modern nondescript strip mall that wouldn't be worth a second look to the average commercial architecture geek.

Thanks to the Rust Belt's infamous urban decay and associated low property values, however, the the pointybois, countless broken chains, and a litany of other historic retail buildings live on as both anachronistic businesses and dilapidated husks. Because of this atmosphere, it's still possible to get both the architectural and culinary experience offered by Dawn Donuts, although the two halves of the experience are separated by a 120 mile drive. I probably would have driven much further than that for the complete Dawn Donuts experience. I've definitely driven further for reasons much more trivial.

Thanks to Keith, who writes for My Florida Retail Blog for tipping me off to both the past and present existence of Dawn Donuts. Come to think of it, he told me about Maryland Fried Chicken too. Thanks for that as well, Keith.

Thanks as well to Roadarch.com for their information regarding the locations of surviving pointybois.

Be sure to like the Broken Chains Facebook page to receive updates about new posts, and occasional bonus material.
Posted by Zap Actionsdower at 2:34 PM