Just about every fall during my tween and teen years I’d miss a couple days of school to take a trip with my grandparents to Hershey, Pennsylvania. My grandfather was an avid antique car enthusiast, and we’d make the pilgrimage to Hershey every year for a massive car show and swap meet where he and I would walk through endless rows of old cars with hordes of surly old men milling around in unironic trucker hats proclaiming their past military service, preferred sports team, and/or car make of choice. It was invariably a grueling three days of interminable walking, usually in inclement weather, subsisting on greasy carnival food and Hershey bars, rising at 4 or 5 in the morning to drive an hour from York, Pennsylvania, where hotel rooms were drastically cheaper than in Hershey. In retrospect, my grandma’s routine of spending all day indoors, hanging out in Chocolate World, a sort of shopping mall selling an obscene assortment of Hershey-branded foods and souvenirs, seemed slightly more sane than the all-day slogs through chilled and damp parking lots Grandpa and I would endure in an effort to see every last Pierce Arrow, Packard, Pontiac, Pacer, and Pinto. The whole ordeal would be bookended by a pair of ten hour drives to and from our old Kentucky home. It was on those drives, sitting in the back seat of my grandfather’s grandpa-spec Lincoln or Cadillac with Guy Lombardo or Rush Limbaugh playing ad nauseam on the radio that I first became aware of the restaurant brands that didn’t exist outside of my normal Central Kentucky bubble.

It was on that endless trek through Eastern Kentucky, West Virginia, Maryland, and Pennsylvania that I first saw signs for Rax, Roy Rogers, and Tudor’s Biscuit World. My grandparents, who grew up during the Great Depression, never stopped at any of them, opting instead for picnic lunches of ham salad and Twinkies from a cooler at highway rest areas, but I vowed I’d be back to each place when I was a weird adult with the wherewithal to take a pointless roadtrip and share the experience with strangers on the internet.

It was on one of those drives that I noticed a curious business during a gas stop in some obscure corner of West Virginia, housed in a long narrow building with a red mansard roof. Large plate glass windows showed limited seating surrounding an open kitchen. A sign sitting on tall poles in the parking lot read OMELET SHOPPE, with one word sitting atop the other, each letter with its own backlit plastic panel. It was surreal. Everything about the place screamed “Waffle House!” except the sign. It was like I was staring across a rift in space-time at some alternate reality’s version of Waffle House. The memory never fully left me, but at some point a decade or two later I was unsure if Omelet Shoppe was a distant memory or a fever dream, that is until earlier this year.

I was driving through the outskirts of Indianapolis when I saw it again, the same 12 panel, two word sign on high telescoping poles that once beckoned interstate travelers to an Omelet Shoppe. This one had long been neglected. Panels were missing and damaged. (I later learned that the building that was the Omelet Shoppe became an Indian restaurant, that confusingly retained some of the Omelet Shoppe menu.) That derelict sign confirmed the reality of my fuzzy memory, and I began scouring the internet for any information on what I now knew to be a restaurant chain. I can usually find at least a brief Wikipedia entry for the places I write about, but my research on Omelet Shoppe turned a website for the brand showing four locations owned by an entity known as Blue Ridge Best Foods still open for business in Virginia and West Virginia, with two locations in each state. Further research found a fifth operational location in Alabama, a firsthand report of a former location near the Iowa/Illinois Quad Cities, and a few additional former locations with similar operations and slightly altered names like Omelet Spot and Omelet Stoppe. With locations spread from Alabama to Iowa, I could only conclude that Omelet Shoppe was once a fairly large chain that had declined to the point of having only a few holdout locations left in operation. This is nothing new for me, but the fact that the brand was largely forgotten intrigued me more than most of the places I visit. The idea of being able to document a brand that had become obscure to the point of not even having a Wikipedia article in the year 2018 made the prospect of visiting Omelet Shoppe and writing a Broken Chains post about them too tantalizing to resist.

As soon as I could, I packed up the car and headed to my nearest operational Omelet Shoppe, located in Parkersburg, West Virginia. I found my way to Parkersburg by way of South Charleston so I could stop by Suzi’s for a Big Shef en route. I spent a Saturday night in Parkersburg, and stopped by Omelet Shoppe for breakfast on my way out of town Sunday morning. It was a little after 8 AM when I drove the few miles up I-77 to the Omelet Shoppe, which was situated between an abandoned Shoney’s and an abandoned Long John Silver’s with a couple of motels not far off. The place was busy, and I had trouble finding a parking spot in the cramped parking lot. My vague memory of encountering an Omelet Shoppe on that adolescent road trip came flooding back. The building had the same rough dimensions, proportions, and layout as a Waffle House, and the same sign made up of individual square tiles for each letter, employing creative spelling so one word fits nicely atop the other. A Humpty Dumpty-like anthropromorphic egg character greeted me from a sign on the outside of the building by the door. The presence of an "Ollie's Supreme Omelet" on the menu led me to conclude his name was Ollie.


Inside, it would have been easy to believe I was in a Waffle House, as the layout of the dining room and kitchen were just about identical, to the Waffle House layout, with a high counter immediately in front of the grill, and low counters surrounding the kitchen elsewhere with booths along the outer wall. Even the orange tiles along the back wall of the dining room looked familiar. I could swear I had seen the same tiles in an older Waffle House I'd visited somewhere. It made me wonder how many Waffle House buildings are converted Omelet Shoppe locations. I'd bet they were pretty common at some point in history. It certainly wouldn't be a difficult conversion. I took one of the few open seats at the high counter. A small industrial dishwasher just on the other side of the counter was spitting droplets of hot soapy water into the air and precariously close to other customer's plates of food. With mild trepidation I removed the single page laminated menu from its perch behind the napkin dispenser and ordered a sausage gravy-topped Country Boy Omelet when my waitress arrived. When I ordered hash browns as well, she asked if I wanted cheese or onions added to them. If I were a wittier person, I would have responded in Waffle House parlance informing her that I'd love them scattered, smothered, and covered, but Instead, I offered a simple, "Sure!" and she set off to hand my order to the line cook behind her.


The open kitchen would look familiar to anyone who has spent time in a Waffle House. The large flattop grill is situated in the center of the long, narrow kitchen. Bacon crisps on the grill under rectangular weights with worn wooden handles, while hash browns cook in round metal rings, forming them into perfect potato cylinders when plated. The only minor differences from the typical Waffle House that I see in the kitchen layout is that there are only two waffle irons, where Waffle House has four, and the milkshake mixer used for thoroughly whipping eggs into a froth for omelettes is a Ray Kroc-style multi mixer with multiple mixing heads. Most Waffle Houses use a single-barrel mixer. I'm mildly amused that each chain's food prep equipment is true to its respective name in the face of so many glaring similarities, but it makes logical sense that Omelet Shoppe makes more omelettes than Waffle House and Waffle House makes more waffles than Omelet Shoppe.


Despite the crowded dining room, my order is set before me within a few minutes. The omelette would look familiar to anyone who has ever had a Waffle House omelette. It's on the small side, likely made with three eggs, but the time they spent being aerated in the milkshake mixer makes them implausibly light and fluffy. The fillings and gravy make for a nice flavor balance that pairs well with the fluffy eggs. I'm not exaggerating when I say the hash browns were indistinguishable from Waffle House hash browns, which is to say that they were pretty good, crispy on top and soft in the middle, topped with a slice of melted American cheese. The meal also came with a biscuit, which I saw the line cook pull out of a large plastic container of cold pre-baked biscuits. He then split it and placed it on the grill. It's better than it probably has a right to be, leaps and bounds ahead of the microwaved Pillsbury biscuit I had at Horne's earlier this year, but not quite up to the standards, of wild, wonderful, West Virginia's many Tudor's Biscuit World locations. Come to think of it, this is my third consecutive trip to West Virginia without a Tudor's biscuit. I'll have to remedy that on my next visit.


Just as Big Boy imitator Jerry's operation reminded me of an extremely well-run Frisch's Big Boy, Omelet Shoppe felt like a Waffle House location operating at peak performance. The service and quality of the food exceeded any Waffle House experience I've had in recent memory. As is often the case, the fittest franchisees have survived to thrive in their market, in this case, presumably running the Shoney's next door out of business. While the entire operation seemed strikingly similar to Waffle House, it would be unfair to accuse Omelet Shoppe of blatant plagiarism without knowing the history of their brand. It's possible that Waffle House as we know it today may have been influenced in some way or another by Omelet Shoppe. Even if that's not the case, it's well known that Waffle House cofounder Joe Rogers was a former manager of the now extinct Toddle House chain and that Waffle House itself was a fairly blatant copy of Toddle House. Throw the similar Huddle House chain into the mix and the whole genre of vaguely southern, small footprint, highway-adjacent, greasy breakfast joints starts to seem pretty inbred. It's tough to say which chain is ripping off the other, especially when the history of Omelet Shoppe doesn't seem to be well documented.


The lack of information about Omelet Shoppe still bugs me even after eating there, but I take solace in the fact that I was able to experience an operational location firsthand. I'm sure the history of the brand is known by someone somewhere, but it doesn't seem to be published anywhere on the internet, at least not that I could find. If you're reading this and know something about the Omelet Shoppe chain, or any other tidbit that you think I might find interesting, then please leave a comment below, or email me at the link above. I'd be delighted to help document the history of Omelet Shoppe before it's lost to history. 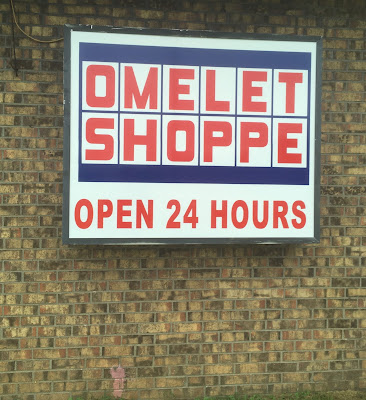 Posted by Zap Actionsdower at 12:30 AM