Dissimilar and Not Quite Extinct 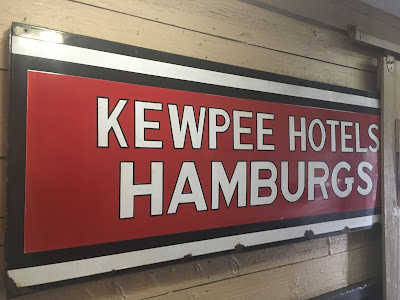 This is a follow-up to my previous post Similar, but Legally Distinct. If you haven't read that post, consider going back and reading it before reading this one.

Visiting multiple locations of a broken chain that still has more than one location can be immensely informative. Stops at different outlets of the same brand give you a more complete picture of the state of an endangered chain from a uniquely comprehensive perspective. My travels to every operating (G.D.) Ritzy’s showed how franchisees can vary in their day to day operations if left alone for a decade or two, plus how the chain founder’s vision can be modified to appeal to a modern audience. Visiting every remaining Rax (except one; I’m coming for you, Harlan, Kentucky Rax!) showed me how great (and not so great) a Rax experience can be. When I visited four Ponderosa Steakhouses in a single weekend, it became clear that the chain was in disarray, but my trip to the lone Bonanza Steak and BBQ showed that there was still a glimmer of hope for the Ponderosa-Bonanza brands. I have also long entertained fantasies of of taking a two week road trip to all 15 or so remaining Taco Ticos that are spread from Iowa to Louisiana with a large clump of locations in and around Wichita. It was with this mindset that I realized that when I visited the three Lima, Ohio Kewpee locations and a couple locations of the related Halo Burger chain, I wasn’t quite getting the full Kewpee experience.

Not long after I dined at the Lima, Ohio Kewpees, all of which have the same owner, I took a trip to Racine, Wisconsin to visit the last operating Red Barn. While researching Racine, I learned it was also home to another of the five remaining Kewpee locations, and that the fifth was less than two hours from me in Lansing, Michigan. Naturally, I visited the Racine Kewpee while I was in town, and I found my way to the Lansing Kewpee last week. The Kewpee chain hasn’t had any meaningful corporate support in close to fifty years and the Michigan and Wisconsin Kewpees have different owners than the Ohio locations. I was curious to see how close the experience was at the outlying Kewpees compared to the three Lima locations.

Kewpee, named for the then popular, but objectively creepy looking Kewpie doll figurines was founded in Flint, Michigan In 1923 and grew to 400 locations around the Great Lakes by the start of World War Two. The chain fell apart in the sixties when a new owner attempted and failed to impose a modern franchise agreement on the longtime owners of Kewpee restaurants. Kewpee was a favorite spot of a young Dave Thomas, and it heavily influenced Wendy’s which opened its first locations while Kewpee was in sharp decline.


During the two days Esmeralda Fitzmonster and I spent in Racine, Wisconsin, we didn’t really adjust to central time. We found ourselves ready for lunch at 10 AM on a weekday when we parked a couple blocks away from the Kewpee in downtown Racine, opting to walk the rest of the way. The building, according to roadarch.com, a 1997 recreation of its circa 1939 predecessor, was instantly recognizable from a block away thanks to its sign featuring a Kewpie doll, resembling a fully nude, crucified, pointy-headed infant. True to it’s design, the inside and outside of the structure looked older than its 21 years with its glazed bricks, porthole Windows, and low U-shaped counters. There’s a glass display case built into one wall at the rear of the dining area full of vintage Kewpie dolls. I made a point of not looking at, or getting near it. While the architecture was distinctive and felt appropriate for a brand with such a long history, it also bore no resemblance to the prewar Kewpee in downtown Lima nor its two 1960s vintage counterparts across town.


The food and service were also at odds with the Lima locations. Upon entering, the surprisingly crowded dining room, Esmeralda and I ordered at the register, received our orders wrapped to go, and sat down at the counter to eat. It was only then that we noticed that employees were taking other customer’s orders where they sat and bringing their food on plates. The Lima Keepees employ a more traditional fast food ordering system and do not offer table service, or plates other than plastic trays.


I order up a burger with mustard, pickles, and onions, Dave Thomas’ preferred burger toppings, plus fries and a chocolate shake. Despite a half century of divergent evolution, the square, ragged-edged burger I received was functionally identical to the Kewpee burgers I’d experienced in Lima, and just as with the Lima Kewpee Burgers, it reminded me of Wendy’s original burgers more than a little bit. The culinary similarities began and ended there, however. The fries were crinkle cut, unlike the straight cut fries in Lima. Likewise, my chocolate shake was made of blended milk and ice cream, and tasted homemade, while the Lima Kewpees use a soft serve machine to dispense their Frosted Malts, a product that’s like a better version of a Wendy’s Frosty. Likewise the Racine Kewpee menu lacks the chili and freshly baked pies that are available in Lima, but does offer fish and chicken sandwiches that aren’t available at the Ohio Kewpees. Overall, the experience was perfectly pleasant aside from the decor, but if you remove the Kewpee name and dolls, it didn’t feel terribly distinctive.


It took me a while to visit the Lansing Kewpee, but a few days ago, I found my way there. It was late afternoon on a weekday, and like the Racine location, this Kewpee was downtown. I parked a couple of blocks away, took a moment to admire Michigan's Capitol building, which was directly in front of me, then made my way down the street to the Kewpee. It's the only non freestanding Kewpee still open, housed in a short brick building crammed between taller buildings. There's a Yoga studio upstairs. People who look like they do yoga are filing in and out of the shared entryway as I walk in. I don't look like I do yoga. I look like I drive around and eat hamburgers. 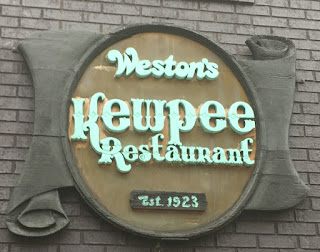 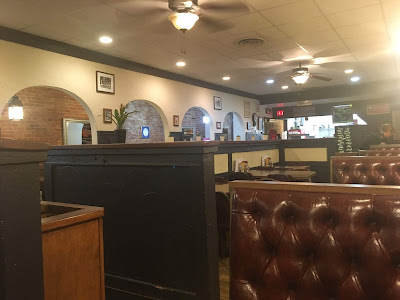 Immediately upon entry, I'm met with a large red and white porcelain "Kewpee Hotel Hamburgs" sign, that looks to date from the early days of the Kewpee brand. A little research revealed that this location dates back to 1923, and is therefore the oldest Kewpee still in operation. The interior of the place with its exposed brick, arching alcoves, and tufted booths feels old and comfortable. The business is still run by the family of the original owner, and outside signage reads "Weston's Kewpee Restaurant." It feels like one of thousands of mom and pop burger places, which it essentially is. I doubt many of the regulars here know that Kewpee was ever a chain. Still, there are Kewpee artifacts here and there on the walls, mostly the same blue and white monochrome logo that's on the top of the menu. It's an odd time of day and the place is nearly empty. A sign near the door tells me to sit whereever I want. I oblige, and a waitress greets me at my table. I order a Diet Coke and review the paper menu. It's the most extensive Kewpee menu I've seen, with only a small section near the top devoted to hamburgers. Shakes are nowhere to be found, but this Kewpee is true to the chain's Michigan roots.


The likelihood of encountering green olives on a hamburger increases dramatically the further west one travels in Michigan, and I suspect the Flint-born Kewpee was slinging olive burgers from the very beginning. The Lima Kewpees, which dress each burger to order, offer green olives as a topping option. Halo Burger, which is a descendant of Kewpee also has an olive burger on the menu. While green olives were conspicuously absent from the Racine Kewpee, they're prominently featured on the burgers of the lone remaining Michigan Kewpee. Three different topping options and patty sizes work out to nine different burgers being present on the menu at Weston's Kewpee. When my waitress returns with my drink, I order up the mid sized King Deluxe which comes topped with olive sauce, lettuce, and tomato. She warns me that it has olives on it, expressing concern that I was expecting something akin to a Whopper. If only she knew I've forced myself to consume olive burgers repeatedly to the point of almost enjoying them.


My order came up quickly, and the first thing I noticed was the brioche bun. I suspect it to be a recent addition given the recent brioche fad and the fact that it's the first I've seen at any Kewpee. The olive sauce seems to be little more than a mixture of olives and mayonnaise, which is consistent with just about every other Michigan olive burger I've had. Despite the differences, the burger is a Kewpee hamburger where it matters, in the patty. It has the signature square shape with ragged edges and uniform thickness I've come to appreciate from the other four Kewpees. Despite the inconsistencies elsewhere, a Kewpee burger patty is perfectly consistent across five locations in three states that have been operating essentially independently since the early 1970s. The operators knew that it was that meat puck that made them successful, and tailored the rest of their businesses as needed over the years.

Meals at all five Kewpee locations gives a comprehensive frame of reference of what remains of the Kewpee brand. It's tough to say from my 21st century viewpoint which is the most authentic. Maybe they all are in their own way, or maybe none of them are. The Lima locations feel the most modern, frozen in an era when the Kewpee chain was struggling to remain relevant and adapt to the changing fast food landscape, yet they seem to offer the most authentic menu. The Lansing Kewpee has a storied atmosphere, and a long history, but the majority of its menu is a decided departure from the original Kewpee offerings, and the Racine location simply feels like a tribute to Kewpee, the burger joint equivalent of a cover band. Each has its own merits, and offers a pleasant, if inconsistent experience, but the blend of consistencies and inconsistencies is what makes these places interesting and worth travelling to in the first place. 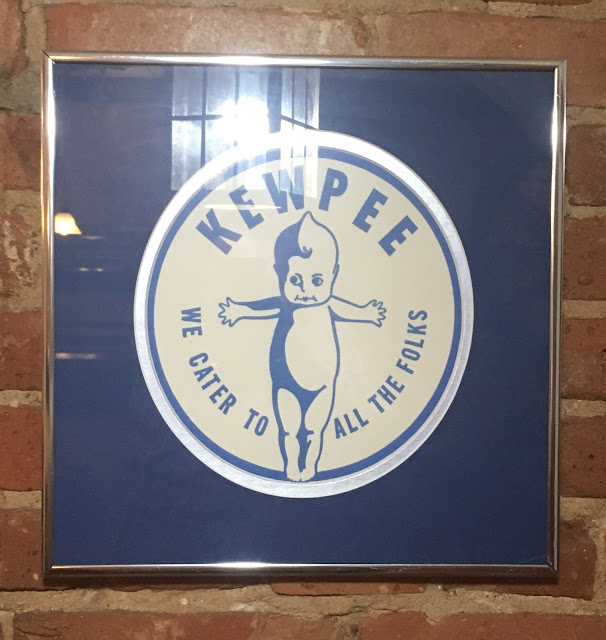 Posted by Zap Actionsdower at 10:24 PM