At the tail end of my tour to every operating G.D. Ritzy’s earlier this year, I made a quick stop at a Frostop drive in just down the street from the Huntington, West Virginia G.D. Ritzy’s. I generally enjoyed the atmosphere of the outdoor seating area despite it being a chilly damp day in early April. I had just eaten a full meal at the Ritzy's up the street, so I just had a chocolate shake, and enjoyed it while taking the time to appreciate the giant spinning root beer mug atop the building. I took a quick video of the spinning mug, but realized too late that I failed to capture a full revolution, and that a .gif made from the video therefore wouldn’t loop properly. Still, I kept the cup my shake came in as a souvenir. You can see it in the header image above. I made a mental note to research and write about Frostop later.

LS Harvey opened the first Frostop in Springfield, Ohio in 1926. The brand expanded rapidly after World War Two and rode the wave of the drive in boom of the fifties and sixties, peaking at around 350 locations in the south and midwest. Like A&W, Dog ‘n Suds, and B-K, Frostop drive ins would make their own root beer using a proprietary recipe. As with many brands covered here, decline came for Frostop in the seventies with a slowing economy and increased competition from the National fast food chains. Corporate support for franchisees ended in the early eighties, rendering the remaining Frostop locations independent.

Today, there are thirteen surviving Frostop drive ins open for business, spread from Mississippi to Idaho. Frostop-branded beverages are also available in select retail outlets in several states, thanks to Ohio-based FBG Bottling who seems to own the Frostop brand these days. Their website has a decent amount of information on the drive ins as well, but the definitive online source for all things Frostop is the blog run by the operators of the LaPlace, Louisiana Frostop.

With nonexistent corporate support for the past 35 years and hundreds of miles between formerly-franchised locations, I thought it would be fun to visit and compare a couple more surviving Frostops and see what, if anything, they have in common. I also needed to find another spinning mug sign in order to get a properly looping video. My recent trip through Indiana and Illinois routed me through two different Frostop towns, and of course, I stopped and ate at both of them.

It was Saturday morning when I rolled into Tell City, Indiana. I had time on my hands. I planned on getting to town right when the local Frostop opened, but had neglected to account for the change to central time, which had occurred somewhere between where I was and the hotel just north of Louisville where I had spent the previous night.


To kill time, I snooped around an empty Ponderosa on the edge of town, which had been closed for over three years but still had its signs up. I then walked a couple laps of the local Walmart before ending up parked down the street from Frostop. I still had 15 or so minutes to kill, so I walked around the block, repeatedly. On my third pass of the Frostop, they were open.

This location didn’t seem to offer curb service, as the parking space was limited. Tragically, there was also no giant mug to be found anywhere on the property. Aside from the individual letters along the roof spelling out “FROSTOP” the building was pretty nondescript, little more than a pole barn with a porch. I examined the menu, walked up to the window, and ordered something called an Orbit Burger and a root beer. I had fuzzy memories of some forgotten Food Network show where the hosts were seeking out a flying saucer shaped burger, a beef patty encased in round discs of bread crimped together at the edges. They ended up finding it at some old drive in. Could it have been a Frostop? Had I stumbled on nearly forgotten, retro-futuristic burger by accident? My hopes were high as I removed an oddly placed structural toothpick, and unwrapped my Orbit Burger. I was quickly disappointed when I found the Orbit Burger I had ordered off the unillustrated menu had two patties, lettuce, a single slice of cheese, and was slathered in thousand island. That’s right, it was a Big Boy knockoff. It wasn’t terrible, but wasn’t great. The one detail I remember a week later is that the patties were overcooked and leathery.


The house-made root beer was another story. The typical sassafras/vanilla/wintergreen flavor was there, but there were more complex flavors in the background including hints of cinnamon and maybe spiced apples. Yeah I like to talk about root beer as if it’s fine wine. What of it? I was a little disappointed there was no frosted mug, and disappointed further when the styrofoam cup had no logo on it. The crushed ice in the cup was a nice surprise though. Long after I’d finished the drink, the remaining saturated ice became a makeshift root beer snow cone, which I enjoyed in the car for the next hour or so on my way to my next destination.


Chrisman, Illinois was my next, and final Frostop stop of the trip a couple of days later. I was in rough shape when I rolled into town. I’d been on the road for three midwestern late summer days in my old Ford Festiva, which is not equipped with air conditioning. I’d spent the night before in a tent, camped out at a friend’s family farm with several other Festiva enthusiasts. I had been up since before dawn that morning thanks to a rooster adhering to cartoon stereotypes and crowing repeatedly starting at around 4:30. I had been outside in a hot asphalt parking lot all day long autocrossing Festivas, and as much fun as I’d had, I’d managed to get what turned out to be the worst sunburn of my life. Still, I pressed on, taking solace in the fact that Google Streetview showed the Chrisman Frostop had a giant mug sign, and I’d have my chance to get my video of it spinning that I could turn into a perfectly looping gif.


As I piloted my Hawaiian shirt on wheels into the parking lot, I was crestfallen. The mug was still there, but it was badly in need of restoration and looked like it hadn’t spun in at least two decades. The menu bore no resemblance to the menu of the Tell City Frostop, and was augmented by handwritten signs advertising new menu items and newly raised prices. The place was packed. It was a balmy Sunday evening, and the next day was Labor Day. It seems everyone in town had a hankering for Frostop that night. Management had not anticipated this holiday weekend boom, and only a single carhop seemed to be working. She darted in and out of the kitchen serving other customers before she got to me. I ordered a double cheeseburger, fries, and a root beer, and when she returned a few minutes later with my order, she took my money, and said she’d be back with my change.


The burger was passable, but in no way distinctive. It could have come from just about any mom and pop burger joint. Simultaneously, it bore absolutely no resemblance to the Frostop burger I’d had a couple days before. The size, shape, and flavor of the patties was completely different. The fries were the generic and ubiquitous crinkle cuts. I was looking forward to at least enjoying another good made from scratch root beer, but was again disappointed to find it completely different than the root beer I’d had in Indiana. The licorice and cinnamon undertones were gone, and this brew was a good deal sweeter. One might say it had bite. The menu at this location prominently features Coca Cola products, so I strongly suspect I was surreptitiously served Barq’s root beer, which would render the giant Frostop mug out front a giant lie.

It was around this time that I noticed I was almost done with my meal, and my carhop hadn’t returned with my change. The scene out my windshield was mayhem. An old farmer was engaged in an argument with some scruffy looking bikers to my right while unruly children were ripping the taped-on paper amendments off of the unusually low mounted menu board directly in front of me. The carhop ran in and out of the door at least ten more times before she came back with an apology and correct change from the 20 I had given her earlier. I was ecstatic to fire up my tiny engine and let all 63 horsepower pull back to my tent at the edge of a cornfield. I got the best sleep I had ever gotten with a sleeping bag and air mattress that night, at least until the rooster woke me up again right on schedule at 4:30.

A week later, I was back in air conditioned civilization with a mostly healed sunburn. I began wondering if that with so much variation between locations, if either Frostop I visited was actually serving the authentic root beer recipe. According The the LaPlace Frostop blog, the bottled version uses the original formula, so I set out to find some in Metro Detroit. Luckily, my local Rocket Fizz carried the stuff, and I brought home a couple bottles to sample. This evening I mowed the lawn, came inside and opened one of the bottles. The liquid inside had the same cinnamony aftertaste, as the stuff I had in Tell City. It's unique, but quite pleasant almost like apple pie flavored root beer. The verdict: Tell City Frostop root beer is the definitive Frostop root beer, Chrisman, not so much. Based on the three locations I've visited, the Frostop brand seems to be a mixed bag. The one in Huntington seems to have the best handle on things in terms of outward appearances, and they make a good chocolate shake. I might have to swing by there for a full meal the next time I'm in town. I'll probably make a new post when I do, and you better believe it will feature a properly looping .gif of the spinning mug. 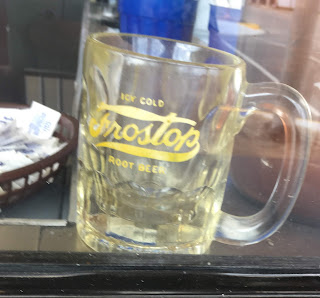 Posted by Zap Actionsdower at 7:34 PM