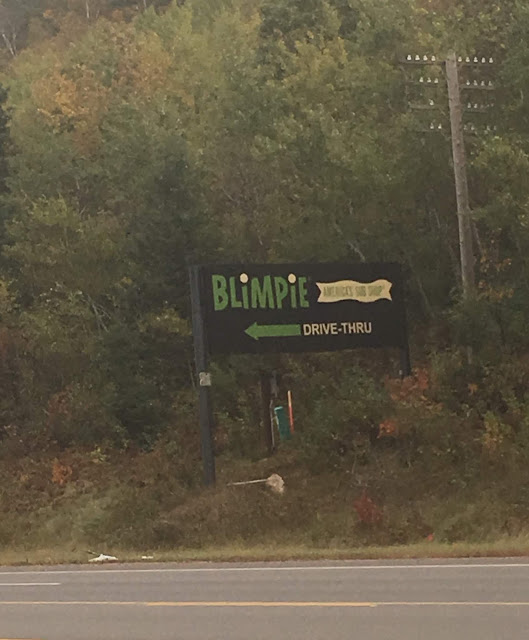 It’s funny. I can look back on eight months of achievement, on Ollieburgers eaten, Kewpees visited, old Taco Tico buildings photographed. I’ve accomplished more than most restaurant and retail bloggers who focus on locations of endangered brands in Michigan and surrounding states, and without the use of my right nostril. What makes a broken chain, dear reader?

Is it having a drastically diminished location count and reduced value as a brand, no matter the current size of the chain? Isn’t that what makes a broken chain? I’m paraphrasing dialog from my favorite movie, but perhaps I’m right.

I took this photo last weekend. As you can see it is an operating Blimpie, run by franchisees who were able to achieve despite market domination by Subway. Zap will fill you in on the details.

On its surface, Blimpie looks like a healthy chain with a near national presence. There are currently just shy of 250 Blimpies open or set to open in 35 US states, but compared to the over 2000 Blimpie locations across 47 US states and 15 foreign countries that were open in 2002, Blimpie is looking pretty broken these days, especially compared to the other green and yellow sandwich place, Subway, which boasts over 26,000 US locations alone making it the largest restaurant chain in the US, ahead of McDonald’s by a wide margin.

The similarities between Blimpie and Subway are numerous. Each chain’s original location opened in the mid sixties with the first Blimpie opening a year before the first Subway. They were in close proximity to one another as well. Pete’s Super Submarines in Bridgeport, Connecticut, the sandwich shop that would become Subway was only 70 miles from the first Blimpie in Hoboken, New Jersey. Both offered similar cuisine with menus consisting of the Italian-inspired sandwiches popular on the east coast known as hoagies, grinders, subs, poor boys, zeppelins, and countless other regional nicknames. Both chains expanded rapidly through the ‘70s, ‘80s, and ‘90s through franchising thanks to a low startup cost and minimal building requirements that allowed both Subway and Blimpie to set up in strip malls, food courts, and gas stations seemingly on every corner. 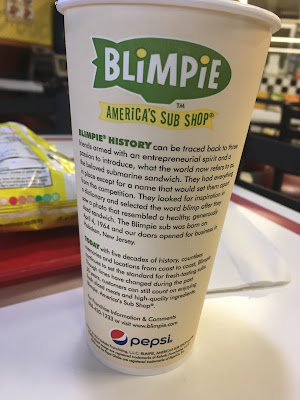 With so many similarities between the two chains, it can be difficult to fathom why Subway thrived while Blimpie floundered. My research revealed at least two reasons for this. Blimpie was founded by three partners, the aforementioned Tony Conza, Peter DeCarlo, and Angelo Baldassare. Baldassare left the company early on leaving Conza and DeCarlo in charge. The two remaining partners effectively split the company in two over a disagreement regarding expansion, leaving DeCarlo in charge of a new company that controlled Blimpie in the core New York/New Jersey market and Conza in charge of the original company operating Blimpies elsewhere. Both companies shared the rights to use the Blimpie name. Conza sold his Blimpie company to California Blimpie franchisee Jeffrey Endervelt’s investment group in 2002. Following Conza’s departure in shortly after the company’s sale, Blimpie was sold a second time to Kahala Corporation, which was itself sold twice between 2013 and 2016. Mergers and acquisitions of parent companies and the associated changes in direction tend to make restaurant chains shrink rapidly, and Blimpie was no exception. Contrast this with Subway, whose founder Fred DeLuca acted as CEO from 1965 until his death in 2015. DeLuca’s sister, Suzanne Greco took over as CEO following her Brother’s death. With four decades of persistent vision from the chain’s founder, Subway was able to step in and saturate markets where Blimpie locations closed. Even the recent closure of 1300 or so Subway locations, the result of changing consumer tastes and the revelation that Subway’s best known spokesman, Jared Fogle, is a literal child molester, barely makes a dent in Subway’s location count. They seem to be weathering the storm reasonably well, all things considered. 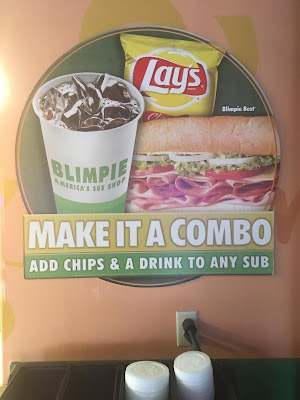 The other reason for Blimpie’s downfall in the face of Subway’s success seems to be marketing. In the 1990s, Blimpie’s marketing emphasized high quality ingredients including fresh cut deli meat. Subway’s marketing touted low prices and capitalized on the low fat diet fad and emphasized a menu with many low fat options, offering up Subway’s sandwiches as an alternative to burgers and fries. Health and budget conscious consumers ignored Blimpie’s fresh cut meats, and flocked to Subway, who incidentally receives their meats pre-sliced in plastic pouches. Until the sale of Blimpie in 2002, Tony Conza himself appeared in Blimpie commercials, but following the buyout, I don’t recall seeing much Blimpie marketing at all, perhaps because the new owners slashed the marketing budget, perhaps because all the Blimpies in my local television market had closed. Either way, in the ensuing years, a lack of attention from Blimpie's parent company allowed Jimmy Johns to dominate the premium sub market.

Blimpie today has locations from coast to coast, but with extremely spotty coverage. Unless you happen to live in a rare market that's home to a successful Blimpie franchisee with multiple locations like Atlanta or Boise, or an area where Blimpie has a corporate presence, like Northern New Jersey where, presumably, Peter DeCarlo’s company is still in control, or Phoenix, where the corporate entity that controls the rest of Blimpie is based, then chances are you haven’t eaten at a Blimpie lately.


I recently set off on a long weekend jaunt to the wilds of Michigan's Upper Peninsula with Esmeralda Fitzmonster with no intention of doing any Broken Chains related exploring. At least, that was the plan until I noticed a Blimpie within walking distance of the hotel where we stayed in Ishpeming. It turns out it’s one of only ten Bimpies in Michigan, and the only one in the U.P. Upon noticing its presence it occurred to me that the last time I recall eating at Blimpie was on a fourth grade field trip nearly a quarter century ago at Lexington, Kentucky's ill-fated Festival Market downtown shopping mall. I knew I had to check out the UP's only Blimpie while I was so close by.


Our first full day in the UP had been a long day of exploring the area's hiking trails and Marquette's downtown, after which Esmeralda and I returned to the hotel in Ishpeming, and while she napped, I walked across the parking lot to the Blimpie. It was early evening, and the place was empty. I was the only customer. I imagine it's more of a lunch place. Two employees were there to take my order and prepare my sandwich. I ordered a Blimpie Best, a cold sub containing four separate Italian-sounding meats. Just as with Subway the sandwich was assembled in front of me, with whatever toppings I chose. Compared to Subway's variety of sandwich toppings, however, the selection here felt limited. There wasn't much beyond lettuce, tomato, onion, and a couple different peppers to choose from. Likewise the bread choices were limited to white and wheat. I opted to dress my Blimpie Best on white with the aformentioned lettuce, tomato, and onion, plus some banana peppers and a curious creamy Italian dressing. I added a bag of Funyuns and a fountain drink (Diet Mountain Dew) to make it a combo, and sat down to enjoy my sandwich and my surroundings.


The exterior of the Ishpeming Blimpie is not much to look at. Blimpie, like Subway doesn't seem to have much in the way of architectural guidelines for the exterior of their buildings, but the Blimpie's interior was another matter. With a hodgepodge of signs and accessories from the past 20 or so years of Blimpie history, the place feels a little bit like a Blimpie museum with its mixture of new logos and old. The walls and even the ceiling are covered in bright, high contrast colors. With the bright red ceiling fans against purple and white ceiling tiles, yellow walls, and checkerboard tiles on the front of the counter, the vibe reminds me a lot of the insane dayglow decor that Cinemark movie theaters had in the '90s. A wall-mounted CRT TV/VCR in one corner completes the illusion that it's 1996 again.


The sandwich was... interesting. I like a good Italian sub, and there's no shortage of good ones in Metro Detroit. They typically get the balance of flavors right using a carefully curated blend of meats, cheeses, and condiments. The Blimpie Best stood in contrast to the sandwiches I find in independent Italian delis near home. The several highly seasoned meats coupled with the peppers and dressing reminded me a bit of licking a pine tree, and not in a good way. The vortex of herbs and spices simply did not play well with each other. On the plus side, they had been more generous with the meat than at the typical Subway, and the bread was, in my opinion, better, less chewy than at Subway. No one would accuse Blimpie of using yoga mat chemicals in their bread. At six bucks plus tax for my little combo, the price wasn't bad either. While I didn't love the sandwich I ordered, I'd come back to this Blimpie and order something else the next time I was in town. The interior decor alone is worth the price of a meal, but this location may not exist in its current form the next time I find my way to Ishpeming.


Multiple signs on the windows and on one side of the marquis note the owners are retiring and selling the entire business. I wish them the very best, but know that ownership changes often spell doom for franchised businesses like this one, especially in such an isolated market with no other franchisees around. I've often entertained fantasies about buying a franchise in some obsolete restaurant chain and striving to run it as the best example of that chain that I could, and briefly entertained a fantasy of taking out a loan  and buying the Ishpeming Blimpie. When I floated the idea to Esmeralda, she pointed out that I'm a hermit who doesn't like interacting with strangers, and that's not exactly conducive to running a restaurant. When I mentioned other similarly introverted restaurateurs like Luke Danes and Bob Belcher, respectively of Gilmore Girls and Bob's Burgers she pointed out that they're both fictional characters. I can't refute her point, I'll stick to my day job, but the idea of doing my part to keep the Blimpie brand in the aloft as the sole location in the more pleasant of Michigan's two peninsulas has been my favorite fantasy since returning home.

Posted by Zap Actionsdower at 7:18 PM