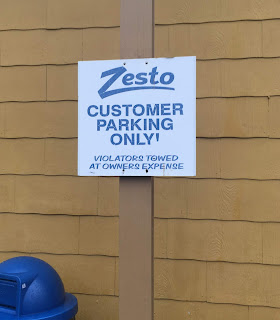 Last fall, I visited a few Dog ‘n Suds locations toward the end of their operating seasons to mark the beginning of the colder months. After a brief, but very angry winter, the seasonal outdoor food stands are beginning to open for business again. The spring bloom of these perennial businesses coincided with my recent trip across Indiana. I took this as a sign that it was time for me to see what the Hoosier remnants of the Zesto chain had to offer.

In the optimistic postwar environment of 1945, inventor and entrepreneur Louis Austin Merritt “LAM” Phelan, whom I can only picture as a living, breathing, wacky cartoon inventor, was in charge of the Taylor Freezer company and looking to create a market for his latest creation, the Zest-O-Mat frozen custard machine. Zesto, a chain of franchised frozen custard stands which had the exclusive, and mandatory rights to use Zest-O-Mat machines was the result. The chain expanded nationally during those prosperous years. Following a tumultuous decade, however, Taylor Freezer management, unaccustomed to retail businesses, and ill-equipped to deal with an ever-expanding base of franchisees with their own concerns and complaints, abandoned the Zesto brand, forcing franchisees to operate independently.

Many newly-independent Zesto owners kept the Zesto name, and many surviving Zesto operators began offering hot food in addition to ice cream, including Ernie Hernandez, who sold pasta and made from scratch sauces from his Central California stand. He even published a proclamation regarding his method for success in the pasta sauce business. He called it Ernesto’s Modesto Zesto Pesto Manifesto.

Okay, I made that up, but a good many Zesto franchisees started selling burgers and hot dogs after Taylor Freezer and LAM Phelan walked away from the business. The Zesto name would end up under the control of the Wahoo, Nebraska-based TJ Investments who sells the rights to the Zesto name and logos, though the food offered at the original and new Zesto locations open for business in Indiana, Georgia, Missouri, South Carolina, and South Dakota seems to have a high degree of variation between locations. (Wahoo, Nebraska sounds like it’s probably populated entirely by cartoonish LAM Phelan types.)

My travels through Indiana would take me through two Zesto towns, Fort Wayne (also Home of the last Azar’s Big Boy) and Evansville, whose G.D. Ritzy’s locations I try to visit quarterly. Both towns are home to both original, and later post-Taylor Freezer era Zesto locations. I approached Zesto as a purist. I visited two locations that opened between 1945 and 1955, and ordered only ice cream items at both places. Newer locations and hot food were of little interest to me, at least on this trip.


Fort Wayne’s original Zesto location is situated near the center of the city at a quiet corner on the edge of an old residential neighborhood. I visited on a rainy weekday evening, but there were still a few people ahead of me at the order window. While I waited, I took the time to appreciate the distinctive old stand’s architecture. The blue and white stripes and giant sideways teardrop shaped neon sign on the roof made the little building stand out, even among other old buildings nearby. The brickwork on the front of the building was notable as well, with the front wall being constructed of flat red bricks and curved glass brick that flanked a central window containing the menu. The building and its surroundings appeared impeccably clean and well maintained, and the staff other customers appeared generally happy to be there, despite the unfriendly weather. 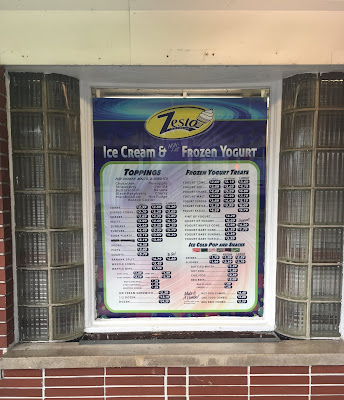 When my turn to order came, I asked for a small turtle sundae, because ever since I visited a Stuckey’s, I’ve been a sucker for anything with pecans. When the cashier asked if I preferred caramel or butterscotch, I opted for the latter. The sundae I got from the order window a couple minutes later was notable for a few reasons, not the least of which was the unique butterscotch sauce, whose flavor profile not only contained butter, cream, and caramelized sugar, but perhaps some nut extracts as well. I suspect it was made from scratch.

The ice cream it rested upon was decidedly not frozen custard. In order to be considered frozen custard, a product must contain a certain percentage of milkfat, egg yolks, and a 15 to 30% overrun, an increase in overall volume due to aeration during the churning process. Ice cream contains less fat and more air than frozen custard, and the eggs are optional. The ice cream in my sundae lacked the telltale yellow tint and dense, smooth texture of frozen custard. It was simply soft serve ice cream, much lighter and airier than what one would receive at Culver’s or Freddy’s, but it was of good quality, much richer and smoother than what you’d find at Dairy Queen or McDonald’s. While I suspect there are Zesto locations out there still selling frozen custard, I doubt any are still using Zest-O-Mat machines.

For one thing, I doubt it’s feasible for a small business to operate and maintain a frozen custard machine that could be well over 70 years old with components that aren’t readily available. I also suspect there’s a dark unspoken history surrounding the Zest-O-Mat machine. LAM Phelan’s Wikipedia page says he died in 1971 at the age of 87, but it doesn’t say how. In my mind, it seems likely as not that he was murdered by a Zest-O-Mat machine that he had bestowed with sentience during a misguided experiment in the secret underground laboratory that he probably had. Perhaps that’s also why I can’t find a picture of a Zest-O-Mat machine anywhere on the Internet. Maybe they were all destroyed for fear of an uprising leading frozen custard machines ruling humans as slaves, at least, that's the theory that I'm going with.

I pondered all of this the next day on my way from Fort Wayne to Evansville, where in between Ritzy’s and Grandy’s stops, I found my way to Evansville’s original Zesto. The building was a near twin to the one in Fort Wayne in terms of design, but it was clear that it had endured a harder life than its sibling. The building’s surroundings were rougher. This Zesto was seemingly surrounded on all sides by old gas stations now operating as loan sharky buy here pay here used car lots. The building was in poor cosmetic shape as well. While the aesthetic of the Fort Wayne Zesto was retro, funky, and clean, its counterpart in Evansville felt run down and grimy. A vending machine was blocking the central window and a motley collection of signs formed the menu in the remaining window openings. Even one of the the curved glass bricks at this location had been broken and was being used as a makeshift ashtray. 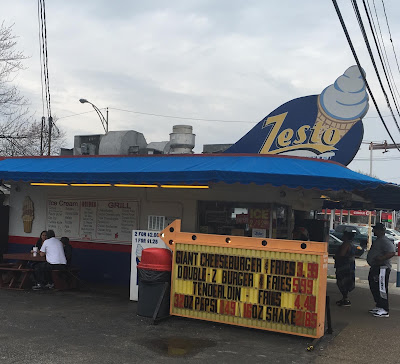 In spite of the dilapidated appearance of the building, I ordered a strawberry shake, paid, and waited by the pickup window. The weather was fairly nice that day, and the place was busy serving several other customers. The menu was much larger at this location with extensive hot food offerings in addition to ice cream. People who were sitting at picnic tables on either side of the building were being called up to get their food orders. No one outside seemed to be ordering ice cream, and no one inside seemed to be making any. I stood around for a good ten minutes waiting for my shake before I gave up and walked away.


Understand that I didn't leave due to impatience. I realize the place was busy, and there were orders in front of me. I would have waited longer, but I noticed employees were placing unwrapped straws in customers’ cups with their meaty, sweaty, bare human hands. This, coupled with the less than immaculate building led me to the decision to leave empty handed without bothering to get a refund on my three bucks and change. Since none of the locals were ordering ice cream, I took it as a sign that I should probably steer clear myself. I didn’t want a repeat of my experience at Sirloin Stockade.

It was the contrast of this Zesto compared to the one I had experienced in Fort Wayne the day previous that first caused me to question the quality of non-G.D. Ritzy’s businesses in Evansville. Later, a miserable, David Lynchian night at the local Howard Johnson, and a laughably bad breakfast the next day at Evansville’s Grandy’s location that led me to conclude the only reason I’ll travel to Evansville in the future is to eat at the three local G.D. Ritzy’s locations, that in my mind, represent the pinnacle of the brand.

Zesto, like many brands that have survived decades with no corporate support, is a mixed bag, it seems. Just as with Frostop, locations sharing the same brand offer little in terms of consistency. I’d love to see a better operator take over and clean up the Evansville Zesto and start using wrapped straws, or a perhaps a vintage LAM Phelan-designed kerosene-powered, self-sterilizing, straw-placing automaton to put straws in customers’ drinks. You know, whichever is more cost effective.


For decidedly less silly and more factual documentation of Zesto locations, check out Roadarch and these two posts from my friends at Marie, Let’s Eat! 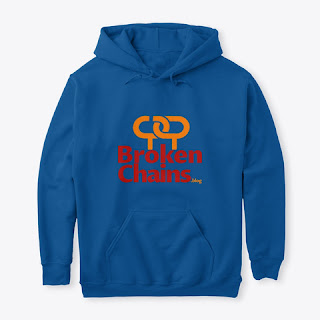 Broken Chains Merch
Use the code BIGSHEF at checkout for 15% off your order.

Posted by Zap Actionsdower at 5:29 PM