Burger Chef is Alive and Her Name is Suzi

When I started this blog, I had a few assumptions, one of which was that Burger Chef was deader than a keg of doornails, and having been born after the majority of Burger Chef locations had closed or been converted to Hardee's, I had not and would never encounter any dining establishment bearing any meaningful resemblance to Burger Chef within my lifetime. While I did my best to accept it, the lack of Burger Chef in my life nagged at me. I'd idly while away hours looking at pictures of former Burger Chef locations and old advertising materials, reading about the chain's history, even purchasing and reading Flameout: The Rise and Fall of Burger Chef, a comprehensive history of the brand, written by the ironically surnamed John P. McDonald. It was this ravenous consumption of Burger Chef related content that led me to one place where there's still a little bit of Burger Chef magic left, but I'm getting ahead of myself.

Burger Chef evolved from General Equipment, an Indiana-based supplier of restaurant equipment. Among other products, General Equipment supplied Burger King with its flame broilers in their early days. General Equipment executives, Bob Wildman and Frank and Don Thomas opened their first restaurant in 1954 to showcase their line of machines to prospective customers and the general public. The restaurant was an overnight success that would be developed into the franchised business that became known as Burger Chef. The first franchised locations opened in the late fifties, and expanded quickly. Franchisees were carefully vetted, and as a result, coupled with the fast food boom of the late '50s and early '60s the majority of franchises were successful. To aid expansion, Burger Chef would cosign the mortgages on the restaurant properties of new franchisees. This practice led the company to the brink of not having enough collateral to support new loans. In need of additional capital, Burger Chef accepted a buyout offer from General Foods in 1968. This was a common problem in the fast food industry at the time. Burger King was acquired by Pillsbury around the same time for similar reasons.

During the '60s and early '70s, the Burger Chef brand evolved, and brought about innovations that would become standard in the fast food industry. Burger Chef was the first major burger chain to offer a fish sandwich, mainly to cater to franchisees in predominately Catholic areas who were losing business on Fridays. (Ray Kroc infamously tried to market a pineapple sandwich called the Hulaburger to remedy this same problem for McDonald's franchisees before settling on the much more popular Filet O Fish.) Likewise, Burger Chef's double decker Big Boy knockoff burger, the Big Shef beat the Big Mac to market. Burger Chef was also the originator of the kids meal, with their Burger Chef and Jeff characters and Funmeal line. They even unsuccessfully attempted to sue McDonald's when they launched the Happy Meal a few years later.

With infusions of cash from General Foods, Burger Chef continued to expand rapidly, becoming the second largest American restaurant chain in 1971 with over 1,200 locations, within 100 or so of McDonald's at the time. The General Foods takeover was what eventually would bring about Burger Chef's decline, however. Unfamiliar with the restaurant business, General Foods mismanaged the brand. They made frequent changes to Burger Chef's logos and buildings. Franchise agreements had few provisions requiring franchisees to update their buildings, and many didn't, resulting in a lack of brand consistency.  The constant changes in signage and packaging along with pressure to modernize buildings served to alienate longtime franchisees, as did newly appointed corporate personnel overseeing franchised locations on a regional basis. Flame broiling was even eventually abandoned in favor of burgers cooked on electric griddles. The lack of consistent branding and an increasingly antagonistic relationship with the franchisees, as well as rapidly approaching market saturation caused growth to stagnate as other brands continued to grow internationally. The beginning of the end occurred in 1982, when General Foods' Burger Chef division was sold to Imasco, a Canadian tobacco conglomerate, who had purchased Hardee's the year previous with the goal of quickly amassing a nationwide fast food chain.

Schroeder's in Danville, Illinois is what most fans consider to have been Burger Chef's last stand. After their franchise agreement expired in 1992, they changed their name as well as the trademarked names of their menu items, and continued business as usual well into the current decade. Their decline came quickly after an ownership change and ultimately led to their permanent closure in 2015. I missed my chance to eat at Schroeder's, and I thought, I'd never have a chance at a Burger Chef experience, until I stumbled upon a few mentions of a former Burger Chef location in West Virginia operating as Suzi's. They seemed to be known more for breakfast biscuit sandwiches than burgers, but the pictures I saw of original Burger Chef menu boards on the inside of a well-preserved General Foods-era Burger Chef building caught my attention. A newspaper article mentioned the place was partially owned by a former Burger Chef regional manager. The presence of a double decker burger on the menu that I suspected was a debranded Big Shef meant that the first time I was anywhere near South Charleston, West Virginia I'd be taking a trip to Suzi's seeking out the next best thing to Schroeder's.


A spur of the moment trip down to Lexington, Kentucky for a family gathering plus some extra free time while I was down south meant that I was able to make the six hour round trip from Lexington to South Charleston and back (with an obligatory quick stop at the Huntington G.D. Ritzy's on the return trip). It's midday Saturday when I hop off I-64 in South Charleston, rolling past a Hardee's near the off ramp, whose presence I suspect helped to preserve the Burger Chef that would become Suzi's. I park in the mostly full parking lot and marvel at the original drive thru menu board, and walk into the impeccably clean, yet decidedly vintage dining area. The staff are attentive and wearing matching uniforms. To my delight, a General Foods-era menu board is still present, with modern menu additions added in matching font. The Burger Chef Works Bar, stocked with burger toppings and condiments is also still there. I'm tempted to order a biscuit sandwich, but I came here for Burger Chef food, and breakfast biscuits are plentiful in West Virginia. I order a Chicken Club, and a Double Decker and take them to a table for examination.


Burger Chef's novel plastic sandwich wrappers are long gone, as is any branded packaging. My sandwiches are in plain white Styrofoam clamshell containers. The Chicken Club, which was a late '70s menu addition, is exactly as it is pictured on the menu board with a breaded fried chicken breast and four strips of bacon. It's appearance is uncanily accurate to the illustration. To my delight, it's been cooked fresh, and is a really tasty chicken sandwich. I dissect the Double Decker to evaluate its authenticity. I find all the trappings of a Big Shef, the double cut bun, single slice of cheese, and finely shredded lettuce and a white special sauce containing relish and minced onions. I take a bite and am greeted with the unmistakable tangy zip of Miracle Whip. I believe this to be authentic Big Shef sauce or a reasonable facsimile thereof. The copycat recipes I've encountered all call for Miracle Whip rather than mayonnaise. The beef patties have been cooked on a griddle, rather than flame broiled, which is consistent with the General Foods-era vibe of the place. I believe this to be as close to an authentic Big Shef as one is likely to encounter anywhere. The same can be said for the Chicken Club. They both seem to have been made to order. There are a few other items on the menu, I suspect to also be recreations of Burger Chef items, so I'll have to give them a try on subsequent visits. I'll be back to enjoy every sandwich.

While Suzi's isn't the frozen in time Burger Chef-in-all-but-name that Schroeder's seemed to be, it's a nice blend of new and old. The expansive breakfast menu seems well-integrated into the operation and signage of the place. Likewise, it seems to be clean, well-run, and reasonably prosperous. Most importantly, they're keeping the old Burger Chef recipes alive. I suspect this is the most Burger Chefish place left in operation. If Schroeder's was the most authentic remnant of Burger Chef, I'd wager that with Schroeder's gone, Suzi's is the next best thing. 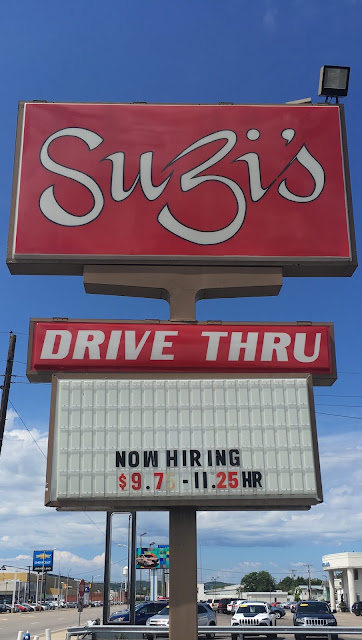 Edit: This is the first of two locations I've found that approximate a modern-day operational Burger Chef. You can read about the other one here.

Also, don't forget to check out my many other blog posts about operating locations of defunct, endangered, and diminished restaurant and retail chains.

You can also like Broken Chains on Facebook to see announcements of new posts, and occasional bonus pictures in your feed.

Posted by Zap Actionsdower at 1:26 AM