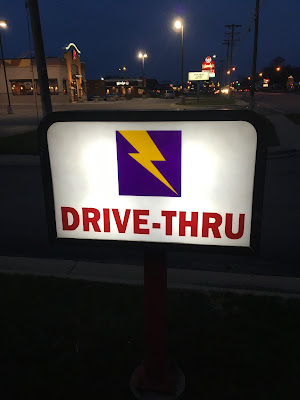 My parents both worked for a college when I was a kid, and as a result, a rotating cast of college students, came in and out of our lives, babysitting or doing odd jobs around the house. One member of this cast came from Michigan and mentioned having worked at a place called Hot 'n Now in high school. He described it as the cheapest fast food place imaginable and told me that when a customer ordered a burger without pickles, he'd have to pick up an already made and wrapped burger, unwrap it, pick the pickles off, and re wrap it. Indeed, Hot 'n Now's strategy was to eliminate unnecessary overhead in order to sell food at the lowest possible price. When a former Burger Chef and Wendy's franchisee named Bill Van Domelen opened the first Hot 'n Now in 1984, the major players in the fast food industry were doing the exact opposite, adding amenities like salad bars and playgrounds to their locations and adding premium items to their menus.

Hot 'n Now was one of many smaller regional chains attempting to bring fast food back to its roots by stripping it to its bare bones, just as the McDonald brothers and Glen Bell had done 35 years prior. By eliminating indoor dining and ordering, Hot 'n Now was able to sell burgers, fries, and drinks for 39 cents each in the mid eighties. The only way to order at most Hot 'n Now locations was through a drive thru. Often, there were no tables or public bathrooms, and only limited parking. The idea was to pick up your food and leave, as the price of your order did not include enough to cover the cost of a place to sit and eat.  Hot 'n Now locations were easy to spot, as most operated out of tall, angular buildings, which definitely served the purpose of getting your attention if you happen to be driving by. The boxy 1980s hamburger cathedrals stood out in the shopping centers and restaurant rows of the Great Lakes region. The buildings that are left standing still do.

The chain expanded and contracted over the years as so many new franchised businesses do. They also changed owners over the years, briefly being owned by the PepsiCo. Hot 'n Now was the first in a series of burger joints that the Pepsi folks acquired and ran into the ground. Under Pepsi ownership many locations closed, and the chain was quickly sold and passed around between several different corporate parents throughout the 90s and early 00s, gradually shedding franchised and corporate locations with each ownership change. I moved to Michigan in 2008, when Hot 'n Now still had a handful of locations open relatively nearby. I'd drive the 45 minutes or so to the one in New Baltimore or the one in Roseville when I felt like going for a drive. After four years in Michigan, I moved to Montana. Four more years later, I moved back, and I was not terribly surprised to learn there was only one Hot 'n Now left. 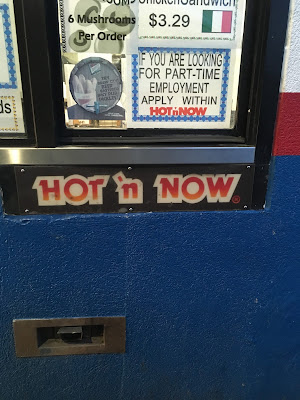 The last location that still bears the Hot 'n Now name is located in Sturgis, Michigan, a 2.5 hour drive from my Metro Detroit home. I still like to go there when I feel like taking a (slightly longer) drive. Last weekend, I did just that. The Sturgis Hot 'n Now has most of the menu items people who grew up with Hot 'n Now are likely to remember. The cheesy tater tots and the green olive burger are still available. The food looks and tastes the same as it did at the Hot 'n Now locations I visited a decade ago. About the only core menu item that is drastically different is the chocolate shake, which used to have a hint of cherry. Today it tastes like just plain chocolate. I suspect that whatever syrup they originally used is no longer available. The menu has also expanded to better suit modern tastes. Signs for new items including fish and chips, a pizza burger, and onion rings all adorn the '90s vintage menu board and drive thru window. I occasionally see menu expansions like this at restaurants that were once part of big chains. Without a corporate entity dictating consistency between multiple locations, menus tend to evolve a bit. I don't really see a problem with it, as long as original menu items aren't significantly altered or discontinued.


The building is the typical high roof, single drive thru, and I suspect it stands out more today than it did in its heyday. It seems to be in decent shape. All the signage looks to be original, and service is quick. There are no longer logos on the wrappers and cups, but every they hand you food in has a Hot 'n Now logo sticker slapped on it. I imagine custom printed items for a single location just don't make financial sense, but the sticker on the bag is a nice nod to the brand's past. True to the name, the food comes out hot and impressively quickly. I sat and ate my olive burger in my van, trying to take a moment to appreciate where I was.

In all likelihood, the Hot 'n Now brand will die when this location closes, but hopefully that won't happen for a long time. The Sturgis location seems to do a steady business despite being next to a Taco Bell and across the street from a Culver's. The management at this place know how to keep the operation running well and how to attract customers. This is often the case with orphaned chain restaurants. Only the best locations, run by the best franchisees survive with little to no corporate support. Places like this often thrive for decades after most or all other locations have closed, serving as working museum exhibits providing a glimpse into the recent past. Often, regulars won't even realize that their beloved local lunch spot was once part of a chain. These are the places I seek out, sometimes to relive my childhood, sometimes to have a glimpse into something I missed due to accidents of chronology or geography. Even if you're nowhere near Sturgis, Michigan, chances are there's a piece of a broken chain near you worth seeking out. 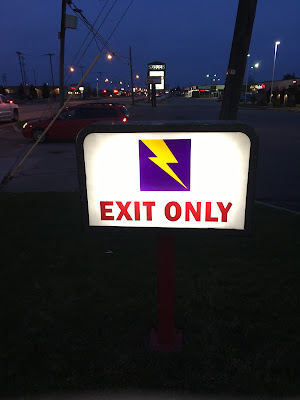 Posted by Zap Actionsdower at 7:50 PM