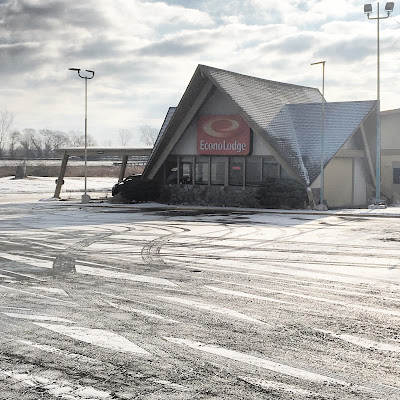 I've sought out and visited a number of endangered chain restaurants, but Howard Johnson's will always be the one that got away. I never had the chance to visit the handful of holdout restaurant locations in the northeastern US before they closed up shop. With the recent criminal charges against the owner of the last remaining Howard Johnson's restaurant in Lake George, New York the restaurant's future is very much in question. HoJo aficionados will tell you without the commissary infrastructure supplying the signature ice cream flavors and fried clams, the Lake George restaurant wasn't a real Howard Johnson's anyway.

Howard Johnson still exists as a hotel brand, of course, but it's a shadow of its former self. A series of of corporate mergers and acquisitions has left the Howard Johnson brand in the hands of Wyndham, who used the name for hotel properties converted from other brands. This move left Howard Johnson's with virtually no brand identity to two generations, including my own. I grew up in the nineties listening to stories my mother told of her childhood family vacations that would often involve meal or overnight stops at Howard Johnson's locations in their heyday. Wanting to capture a shred of the classic 1960s Howard Johnson experience, I set out to find a still-operating motel in a classic orange roof era HoJo building. With the help of orangeroof.org and some basic Googling, I found an EconoLodge in Bay City, Michigan operating out of a 1965-vintage Howard Johnson's motor lodge building. Like most locations of that era, there was a restaurant on site. It wasn't operational, but amazingly, it had never been anything other than a Howard Johnson's restaurant, even long after the motor lodge changed brands. Orangeroof.org reports that the restaurant was operational as recently as 2005. Upon learning all of this information, I spent $51 and booked a single occupancy room for one night.

For their time, the Howard Johnson motor lodges of the fifties and sixties were quite innovative. Their goal was to provide a comfortable and consistent experience for travellers. Most featured interior corridors, and a patio area for every room. Rooms had amenities, such as the bedside "Pamper Panel" which allowed guests to control all the lights in the room from a set of bedside switches. The panel also included a switch to turn the television on and off in an era before remote controls were standard. Likewise, it even featured an electrical outlet that was easily accessible, I assume for guests to plug in electric razors or early calculators. Guest bathrooms featured silent flush toilets, long countertops, and showers with upper and lower showerheads. Many of these features outlived the Howard Johnson sign in front the old motor lodges, and the Bay City EconoLodge was no exception.

The room I stayed in had been freshened many times in its 53 year existence. Wood paneling gave way to painted stucco. Light fixtures had been replaced and had LED bulbs. Carpets and furniture had been changed. The privacy screen by the bathroom door, and the second sink outside the bathroom had both been removed. In spite of all this, the room still had its share of HoJo mojo. The Pamper Panel was still there, and still worked to control all of the lights in the room individually. The TV switch was inoperative, but also unnecessary since the TV was a modern flatscreen with a remote. The Pamper Panel's outlet charged my iPhone just as it would have powered some weary travelling salesman's adding machine a half century earlier. Likewise, the dual showerheads were present, functional, and appeared original, as did the shower controls. The heat lamp switch was also original. There was even a disposal slot in the bathroom for old double edged razor blades.

Side note: I always found these disposal slots in old buildings novel, because they would just lead to a space between the wall studs and plaster. Over time, the wall would theoretically fill up with razor blades and couldn't be emptied. I suppose architects figured that buildings wouldn't last long enough for it to ever be an issue, and given how few people shave with double edged razors and their small size relative to the space where they'd be disposed of inside the walls, they were probably right in most cases.

The exterior and grounds of the building were also reasonably well-preserved. The signature A-frame gate lodge was still standing and in use as a lobby and breakfast area, albeit with less glass than it originally had and plain gray asphalt shingles on the roof in place of bright orange metal ones. The pool area had been cemented over, and there was no courtyard to speak of, but plenty of hallway doors leading to it, hinting at the motor lodge's past glory. According to orangeroof.org, most of the restaurant's equipment and furniture, as well as its signature rooftop cupola was sold at auction a couple years ago, but the building still stands. I doubt it will be around much longer though, as most of the windows are broken or missing, and the interior of the restaurant is open to the elements. It's a bit surreal, considering it's attached to a still-operating motel. Still, it's one of the few Howard Johnson restaurant structures that hasn't been converted to something else, or demolished. There are a couple former HoJo restaurants near where I live, but both were converted decades ago. Being able to see a still standing unconverted structure, and even peer inside through window openings was a real thrill. There was even some heavily-weathered signage still out front, still advertising the signature 28 flavors of ice cream. The fact that any Howard Johnson's restaurant remained open in this century was a little bit remarkable.

At their peak in the mid seventies, there were over 500 US Howard Johnson restaurant locations, but like many of the first generation of interstate highway-adjacent chains, Howard Johnson's was hit hard in the seventies by oil embargoes limiting consumer travel and the increasing dominance of the national fast food chains. It was this downturn that forced the sale of the hotel and restaurant divisions. While Wyndham ended up with the hotel division, the restaurant division was acquired in the mid 1980s by Marriott, who at the time owned the Big Boy and Roy Rogers brands. Marriott had no desire to continue the Howard Johnson's restaurant brand, and acquired the chain mainly for the prime real estate near major highways. As a result corporate-owned Howard Johnson's locations were either demolished or converted to Marriott's restaurant brands. This move eliminated roughly three quarters of the US restaurants, leaving only the franchised locations still in operation.

The franchisees banded together and formed Franchise Associates Incorporated (FAI) to ensure their ability to maintain operations with standardized foods, decor, and fixtures. FAI was strong enough to maintain operations, but failed to evolve or expand the chain. No new restaurants opened during the FAI era, and as the restaurant concept became more and more dated, franchisees closed up shop, one by one, leaving only eight locations, mostly in the northeastern US when FAI ceased operations in 2005, the same year as the Bay City, Michigan restaurant. From then on, the fate of the Howard Johnson's restaurant brand was sealed, it was only a matter of time until they were all gone. Citing a decline in business, the Bangor, Maine location which many fans consider to be the last true Howard Johnson's restaurant closed its doors in 2016. I wish I could have had a true Howard Johnson experience before it was too late, but a night at the Bay City EconoLodge and a poke around the on-site abandoned restaurant was still a great way to spend a weekend.

Posted by Zap Actionsdower at 4:20 PM

Email ThisBlogThis!Share to TwitterShare to FacebookShare to Pinterest
Labels: Hotel, Howard Johnson, Michigan, Not Fooling Anybody