Winter in Michigan is a maddening mix of alternating blizzards and thaws that occur in succession just slow enough that you forget about the existence of grass in between thaws. After a while, it all blends together into gray slush, thanks in no small part to the roads being inundated with enough rock salt to eat through the rocker panels of the average vehicle before it's even paid off. It's mid-February, and my tenth northern winter is drawing to a close. To celebrate, I took a trip.

The American highway was a vastly different place fifty, even fifteen years ago. Urban sprawl was less sprawled. Chain restaurants, hotels, and gas stations were less ubiquitous, and the signs and buildings you'd see along the highways were completely different. I found myself with a free weekend, and with that free weekend, I decided to take a quick overnight trip, and patronize as many historical businesses as I could. (Historical, for the purposes of this blog shall henceforth be defined as having some past connection to an existing or defunct chain.) I get properly geeked out by visiting a business that used to be something else and finding little clues to the building's original use. There is an entire blog as well as a subreddit devoted to this. See Not Fooling Anybody and /r/notfoolinganybody. In the case of this trip, I set out to experience the closest possible facsimiles to experiences that I missed out on due to pesky things like chronology and geography.

My first stop, was Fowlerville Farms in Fowlerville, Michigan, about halfway between Detroit and Lansing along I-96. Fowlerville Farms is a gas station, truck stop, convenience store, and full-service restaurant all under one roof. It began life as a location of the now completely extinct Nickerson Farms chain. Nickerson Farms was the brainchild of I.J. Nickerson, a Stuckey's franchisee who started his own chain of proto-travel plazas in the mid sixties when Stuckey's wouldn't allow him to oprate a full-service restaurant in a Stuckey's location. At their peak, Fowlerville Farms had sixty or so locations, mostly along interstate highways. The steeply pitched red roofs on their Tudor-style buildings were easy to recognize. There isn't a lot of information about Nickerson Farms online, but near as I can tell, there were no locations left by the mid eighties. Like a lot of the chains that sprung up along the newly-built American Interstate system, the various fuel crises in the seventies, and the rise of national fast food chains slowly eroded the customer base and profit until they were forced to close their doors. Fowlerville Farms is an anomaly. Once the Nickerson Farms chain was no more, they simply changed their name, painted their red roof blue, and continued business as usual. 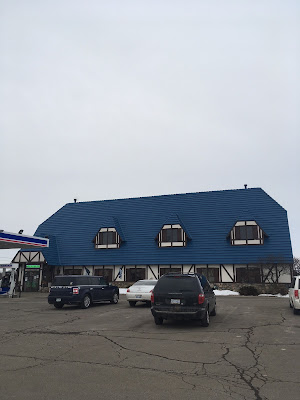 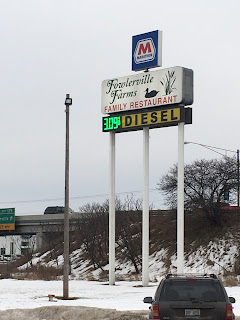 I stopped in for dinner and a tank of gas. While the building has undergone several renovations, it's basic layout is still the same. It feels small compared to a modern truck stop. The building is essentially split in half with a small convenience store on one side, and a restaurant on the other. The menu is fairly expansive, and I've never had a bad meal there. The ceiling is high and vaulted on the inside with exposed rafters. It makes sense that I've seen pictures of at least one former Nickerson Farms location turned into a church. A gimmick Nickerson Farms employed when they were in business was having live bees in a working plexiglass beehive producing honey for use in the restaurant and to be sold in the convenience store. There's no signs of bees at Fowlerville Farms, I imagine because intentionally having a large number of live bees on site sounds like it could only end with litigation. Still, a meal at Fowlerville Farms comes with hot bread with house-made honey butter, and you can buy honey from local farms in the classic plastic bear container at the register. Until recently, I assumed Fowlerville Farms to be the closest I could come to getting a modern-day Nickerson Farms experience, but I've recently heard of another former Nickerson's, still with a red roof and original gas canopy operating as a restaurant in central Ohio, but that's another blog entry. Stay tuned.

There's at least one Nickerson Farms fan blog out there with decent information including a list of every known Nickerson's location. If you're intrigued, or at least not completely bored by Nickerson Farms, stick around for my next entry about where I spent the night.

Posted by Zap Actionsdower at 1:20 PM