Fall is a weird, transitional time of year, at least it is where I live. In the three months between marginally bearable summer heat and apocalyptic winter snow, the weather is maddeningly unpredictable. One day may be 65 degrees and sunny, only for the next day to be 35 with freezing rain. The retail landscape changes too. McDonald’s stops advertising the cherry pies that they’re always out of and begins advertising the pumpkin pies that they’re always out of. The big box stores have Christmas trees on display alongside Halloween costumes, counting on an influx of cash from holiday shoppers to increase their bottom line, and in the case of Sears and Kmart, to ensure half a chance at long term survival. Fall is also the time of year when the fast food outlets of this great land that do not offer indoor seating tend to close up shop until the weather warms back up, with their dormant deep fryers and soft serve machines secured behind metal shutters that cover their order windows. Their marquees declare “Thanks for a great season!” And “See you in the spring!” It was in the midst of this surreal autumnal transition that I realized that I hadn’t yet covered Dog n Suds.

Jim Griggs and Don Hamacher were teachers in the University of Illinois’ music department in the early fifties. Seeking summer income between school terms, they partnered together to open a drive-in that focused on hot dogs and root beer, dogs and suds in 1953 midwestern parlance. The two partners began franchising their business on a whim, and rode the fast food boom of the fifties and sixties to an empire of 650 Dog ‘n Suds locations by 1968. A canine carhop named Rover appeared on signs, food wrappers, and other marketing materials. The chain shrank in the seventies for the usual reasons, namely drive in dining falling out of favor, increased competition from the national chains, and a new corporate parent making unpopular and ill-advised changes to the business. (Check out Restaurant Rewind’s Dog n Suds video for a full history of the brand.) Today, there are 14 or so Dog ‘n Suds locations open at least part of the year, stretching from Arkansas to British Columbia with the largest cluster in Illinois and Indiana. In late October, I was under the gun to visit as many locations as possible before they went into winter hibernation mode.


I had enough points for a free hotel room in Muskegon, and Esmeralda Fitzmonster had a free weekend, so we decided to do a quick overnight trip sampling the forgotten fast foods of Michigan. We had lunch at Hot ‘n Now on the way out, Esmeralda’s first Hot ‘n Now meal in more than a decade, then dinner at our favorite Mr. Quick location. We then stopped by Dog ‘n Suds for some after dinner floats.


Unlike B-K and Frostop who only make their own root beer, Dog ‘n Suds locations seem to also offer a selection of their own proprietary flavors. The Norton Shores location offers home brew, root beer, diet root beer, black cherry, and cream sodas. Coke and Diet Coke are the only macrobrews on tap here. I really liked my black cherry float. With its slightly tart cherry flavor and deep red color, I was a little sad that I had an obligation to try the root beer on my next visit. 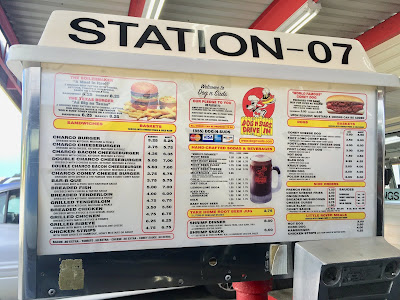 When Esmeralda and I stopped by the same location for lunch the next day, I had a little more time to appreciate the building. It’s the embodiment of every 1950s drive-in restaurant you’ve ever dreamed of. With its painted curbs, bright colors, angled canopy supports, and vintage neon signage, the Norton Shores Dog ‘n Suds is one of the elusive working fast food museums that I’m always excited to find. I’ve previously corresponded with the owner, whose family business has been Dog n Suds since the mid sixties. He was nice enough to share some information he had on B-K drive-ins when I was researching that chain. it’s clear he is all about maintaining and preserving the Dog n Suds brand. He manages a Facebook page for his restaurant as well as one dedicated to the history of the Dog n Suds.


This time, I ordered myself a feast, a coney dog, a Texas burger and some fries which Esmeralda shared with me, plus a big mug of root beer. (Esmeralda is borderline obsessive about Mr. Quick, and opted for one last meal there rather than eating at Dog n Suds with me.) The sauce on the coney dog was unique and delicious, with a blend of sweet, smoky, and spicy flavors and chunks of beef, it reminds me of a cross between barbecue sauce and chili. The Texas burger, a Big Boy-Inspired double decker has the same coney sauce along with a tangy white sauce that I suspect contains mayonnaise, a bit of vinegar, and a spice blend I can’t quite place. The flavors work well together with the charcoal grilled beef. It reminds me of a Western Whopper, but it’s of much better quality than anything ever to come out of a Burger King. The fries were the ubiquitous crinkle cuts, but they were hot and fresh and cooked to the perfect level of crispness, among the best crinkle cuts I’ve ever had.


Dog n Suds has long marketed its root beer as the world’s creamiest, which I always thought was an odd distinction for a dairy-free product, but with its light carbonation and slightly thick consistently, I totally get it. It’s a pleasantly creamy root beer with balanced sassafras and vanilla flavors and just enough licorice that you know it’s there. We place an order for shakes to go and are delighted to find they’re slightly fizzy. My cherry chocolate shake had been flavored with the black cherry soda I was so fond of, and Esmeralda’s vanilla had been flavored with the house cream soda. They were not unlike the Boston Cooler I despise, but we’re deliciously unsullied by Vernor’s ginger ale.
After we returned home, I couldn’t shake the feeling that I needed to visit at least one more Dog n Suds to feel like I’d had the full experience. The other Michigan location in Montague had closed for the season, so I did some Googling to see if any other nearby locations were open. I was pleased to see that the sister locations in Lafayette and West Lafayette, Indiana were open through the following weekend. With minimal hesitation, I packed up the car and headed to the Hoosier State for another Dog n Suds adventure.

The owners of the two Lafayette area Dog n Suds locations are also the owners of the Dog n Suds trademark, having acquired it in 1991. This location, is in an older part of town, right up the street from a used car dealership that clearly began life as a Rax. The Dog n Suds has been open here since 1956. Architecturally speaking, the Lafayette location feels a little plain compared to the one in Norton Shores. Under the red and yellow canopy is a nondescript building clad in beige vinyl siding, likely installed in the past 20 years or so. There’s still plenty of Dog n Suds magic here though thanks to a nice combination of vintage and modern signage, and a Dog n Suds promotional car parked in the field out back. Made of the front ends of two late 1940s Crosley cars welded back to back to make a car with two front ends, it was neat to see. Sadly, it doesn’t look like it’s moved in a very long time. I’d love to see someone put it back on the road someday.


The coney dog tasted just as the one in Michigan had, though the cheese added little to the experience. The flavorful sauce overpowered any cheesy flavor notes. I’m pretty sure the slaw dog was brought to me by mistake, as I’m relatively certain I had ordered sauerkraut instead, but it was a happy accident. The made from scratch coleslaw was deliciously tangy, and strong hints of celery salt gave it a unique bite. I might not have discovered it otherwise. The Lafayette Dog n Suds drive-ins serve their own cola, lemon lime soda, in addition to root beer. There are no Coke or Pepsi Pepsi products on the menu. I’ll have to try them on a repeat visit, as I was in the mood for a chocolate shake on this visit, and I stand by that decision. The shake I received was blended from scoops of ice cream rather than dispensed from a machine and was creamy and almost completely free of the crystallized bits you usually get in blended shakes.


The boilermaker is a burger that I suspect is unique to the Lafayette area Dog n Suds, since it shares its name with the mascot of nearby Perdue University. It’s basically a Texas Burger, minus coney sauce, plus tomato. The absence of coney sauce makes the flavor of the mayo-based special sauce and the charcoal grilled beef stand out more. It’s a perfectly serviceable double decker burger, and the smoky flavor of the beef makes it somewhat unique along Big Boy imitators. I think I prefer the Texas burger though. The fries didn’t taste as fresh as the ones I had in Michigan, but I didn’t care because I got more of my new favorite coleslaw.


The West Lafayette location was built in 2005, making it one of the few Dog n Suds to have opened in this century. It’s essentially identical to its much older counterpart across town, though its more modern surroundings and lack of patina on the canopy supports give away its age. Still, there’s vintage, or perhaps reproduction signage here with much of the neon lighting nonfunctional to add to the illusion that the place is much older than it is.


In the 21st century, a drive in format restaurant is an anachronistic novelty, and at this point, part of the Dog n Suds brand identity. The chain experimented with a conventional fast food format concept at the beginning of its 1970s decline. Had they been more successful with it, Dog n Suds locations might have been much more common today, but drive-in Dog n Suds may have become extinct in the process the way Big Boy drive-ins have and A&W drive ins are in danger of. Still, it’s fun to imagine some alternate reality where some prehistoric butterfly flapped its wings a little more, causing cumulative effects over millennia resulting in a dine-in only Dog n Suds in every fast food row, McDonald’s being nothing more than a single-location local favorite in San Bernardino, and big-box Super Kmarts in every suburban shopping center, each with parking lots full of 2018 model Studebakers and Yugos.

Back in our reality, the handful of surviving Dog n Suds drive-ins I visited seem to be well-run, thanks to decades of experience. They offer a quality product and a memorable experience to their customers. It seems unlikely that the chain will see major expansion in the future, but existing locations are beloved institutions in their hometowns, and are likely to continue to be, at least as long as people own and drive their own vehicles, and seek out nostalgic experiences on warm evenings. 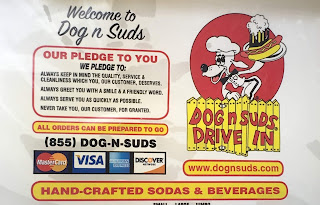 Posted by Zap Actionsdower at 4:14 PM