You Don't Have to Call it Taco Tico 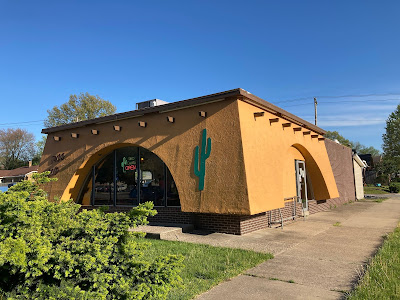 Up until the beginning of last year, I made efforts to maintain a relatively timeless tone in my writing, keeping my posts about places I’ve visited divorced from current events as much as possible and allowing my writing to exist in a similar way to many of the surviving locations of broken chains do, in an apparent vacuum isolated from the world around them, operating has they have for decades. Circumstances later on in the year made operating in that manner impossible for both restaurants and for yours truly. As restaurants began to rely more heavily on delivery and takeout, and as they began hanging clear plastic dividers at order counters and requiring staff and customers to wear PPE, my writing gradually began to acknowledge the realities facing the restaurant industry and humanity in general. Later that same year, when the most consequential election of my life was on the horizon, I allowed my usually staunchly apolitical writing to get a tiny bit political. (I will never explicitly discuss my political beliefs here, but you’ll get a pretty good idea of which way I lean if you read The Kewpee, and probably the rest of this post, too.)

Now that things are beginning to trend toward what looks and feels normal, I was excited for my writing to do the same, so I set out on a trip across Indiana last weekend for what I hoped would be a normalish trip for a few normalish restaurant experiences, but with less than a week in my tenure as a fully vaccinated person, I should have known better. It’s still more than a little weird out there, and over the past year, my understanding of what is and is not normal entered a time of profound transformation, a transformation which is still in progress.

To paraphrase my favorite Canadian TV show, there’s such a thing as too much pandemic talk and a feller ought to be aware of it. I am acutely aware of the amount of pandemic talk I’ve allowed to seep into my writing, and I’ll make a promise here that’s roughly as firm as a flour tortilla that barring the very real possibility of any new, unforeseen pandemic-related calamity, this will be the last Broken Chains post where I discuss my processing of the pandemic at length. However, the realities of living through a pandemic, and how to navigate the world as one of the lucky vaccinated people weighed heavily on my mind when I stopped by Taco Casita, a former Taco Tico in Terre Haute, Indiana that I suspected might still be a Taco Tico in all but name.

My weekend jaunt to Indiana was my first time leaving Michigan since my trip last June. My home in the bluest part of a bluish-purple state was my only real frame of reference for pandemic-era etiquette, and I was scandalized by the occasional maskless individuals I encountered at truck stops, stores, and in common areas of my hotel in firmly red Indiana. Here in Michigan, the mostly older, mostly white people who don’t wish to wear masks in indoor public spaces will at minimum, make the entirely pointless gesture of wearing one on their chin below their mouth. Before I was vaccinated I would at least give these people dirty looks, and would occasionally confront them outright, but I made myself a promise that on this trip that I was going to let things go. I would ignore anyone with an exposed nose or entire face, and I would trust my antibodies to keep me safe. I would assume that any adult I encountered in public was either vaccinated themselves or at least unvaccinated and out in public by choice, and therefore did not require me to speak on their behalf to any inconsiderate individuals with unnecessarily exposed faces. This adjustment was easy enough for me to make when encountering the occasional unmasked trucker at a Love’s truck stop or while dining maskless at a safe distance from other maskless diners at some meal stops you’ll hear about later this month, but it took dinner at Taco Casita to put my promise to myself, and my belief in vaccine efficacy, to the test.

I walked into the 1970s era Taco Tico building on a Saturday evening to discover a mostly full, tiny dining room full of maskless diners and a maskless staff working behind a recently-added plexiglass partition at the counter. I stood, masked, in the order line of mostly maskless people ordered, and took a seat to wait for my number to be called as I watched new maskless customers, representing a surprisingly diverse selection of ages and ethnicities enter the building and stand in the order line. I suspect that since Indiana and other nearby states were spared from the recent surge in cases that hit Michigan earlier this spring, the locals see wearing a mask as less of a priority, regardless of their political affiliation. It really shouldn’t have been a political issue to begin with anyway. Still, after a year of masking up, social distancing, and not so silently judging anyone who didn’t, sitting in the crowded dining room waiting for my food as more and more air-sucking, droplet-exhaling disgusting squishy human bodies entered the little trapezoidal faux-pueblo, I found myself feeling more and more uneasy.

I took the opportunity to use one of the grounding techniques I had discussed with my therapist for exactly this kind of situation, and began to assess my surroundings, identifying individual items in the room, and silently noting them in my head. I took the time to look at, and appreciate the large, taco-shaped window at the front of the building, then the ancient wrought iron lamps hanging from the vintage drop ceiling. It was around the time that I noticed the prints of stylized cacti hanging on the opposite wall that I realized that the dining room was largely unmodified. Even the Taco Ticos I grew up with in Kentucky that likely last had major redecorating done in the late ‘80s were not this original. I wouldn’t have dreamed of walking into this place were I not fully vaccinated, but I’m glad I did. The original decor was well worth the six bucks and change I paid for a taco, sancho, “cinnamon chips” and a Diet Pepsi.

The food occupied the opposite end of the Taco Tico Authenticity Spectrum from the building. While I was pleased to see they had a sancho (essentially a burrito shell stuffed with taco ingredients) on the menu, it came on a little disposable tray, not in a wrapper as Taco Tico would serve it. I suspect most Sanchos here are served covered in an enchilada sauce (“Deluxe” in Taco Tico speak, “Wet” in Taco Casita parlance) as the Sancho I ate had an unusually dry and brittle flour tortilla shell that would have benefited from some extra sauce, whereas Taco Tico sancho wrappings are always soft, pliable, and pleasantly chewy. The Taco Casita sancho fell apart when I tried to pick it up and eat it as I would its Taco Tico counterpart. It's most noticeable characteristic however was its flatness. The sanchos I've come to know are almost perfect tubes of deliciousness. This one looked like it had been run over by a taco truck. The sancho appeared to have been microwaved lettuce and all, which is not to say that Chef Mike has never been employed at Taco Tico, but they know enough there to microwave the meat separate from the tortilla and toppings. Unfortunately, the flavor of the meat bore no resemblance to Taco Tico’s signature blend. Rather, it tasted like Taco Bell’s meat with a few glugs of Sweet Baby Ray’s barbecue sauce added to the pot.

The taco at least looked the part of a Taco Tico product with its unevenly folded hard tortilla and half tomato slice, but the salsa on the taco overpowered the flavor of the meat, rather than working with it in transcendent fast food harmony the way Taco Tico sauce does with Taco Tico meat.

Weirdly enough, while the cinnamon chips were quite unlike Taco Tico’s analog Cinnamon Crustos, I liked them better. The fried bits of tortilla were softer, a little greasier, and had a more complex flavor than the ones at Taco Tico. I suspect Taco Tico’s crustos only get seasoned with cinnamon and sugar, but the cinnamon chips at Taco Casita also had hints of nutmeg and allspice. I suspect they’re seasoned with sugar and a premixed apple pie spice, and the flavor, and texture work really well together. They were the only menu item I bothered finishing after a long day of eating.

So is Taco Casita a bootleg Taco Tico? I’d have to say no. There’s more than a passing resemblance in the menu, and the building is a must see for any hardcore Taco Tico fan, but the food tastes little like the Taco Tico menu items that inspired it. What makes Taco Casita worth a stop for broken chain enthusiasts is the intact nature of the vintage Taco Tico building and the legitimately delicious cinnamon chips. There is, however, still hope of a better approximation of Taco Tico in Terre Haute.

There were once two Taco Ticos in Terre Haute, and both became Taco Casita at some point before I was alerted to their presence, however, the second location closed permanently, in a way making Taco Casita a miniature broken chain having lost 50% of its locations. We can all keep our fingers crossed that some enterprising individual or group might move into that empty, but similar building, and open a legitimate Taco Tico, or at least a more convincing imitation, and keep the interior intact to create an immensely authentic vintage Taco Tico experience.

With my pandemic-related hackles mostly lowered, I concluded my meal, and put my mask back on. I was making some notes on my phone as my favorite David Allan Coe song came on the decades-old wall-mounted speakers.

Well I made a burger, but I was fresh out of olives.

So I went to pick some up in the rain.

But as I drove past G.D. Ritzy’s in my Festiva.

I saw a guy who looked kind of like Conrad Bain.

And I’ll eat up all the tacos down at Tico

And I never minded sanchos with no sauce.

But you don’t have to feed me tacos, Casita.

Because you didn’t try to copy Wichita’s.

Posted by Zap Actionsdower at 2:42 PM