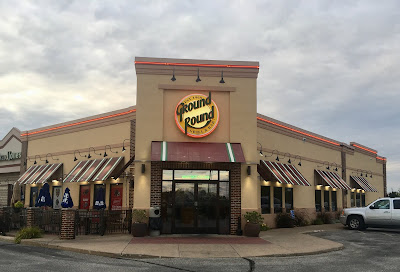 People ask me occasionally if I have any plans to visit the last operating Howard Johnson restaurant in Lake George, New York. My answer to them is always a resounding “Not anytime soon.” The reason for this is m my research of the place shows serious deficits in both quality and brand authenticity. It’s longtime manager was unaware of, or indifferent to the nostalgic value the Howard Johnson brand had, and by all indications he failed to capture the essence of the brand in the restaurant he operated. Online reviewers repeatedly cited poor quality food and outrageous prices as complaints about the world’s last HoJo. That manager stepped down last year in order to serve jail time related to sexual harassment of his employees. Since then, there has been little improvement from what I can see.

Customer reviews from the past few months contain complaints about a deteriorating building emitting unpleasant smells, the same poor quality, overpriced food, and a rude staff. I should probably go there and evaluate the place for myself, but the poor reviews and the troubling history of the location have kept me away. For all these reasons, I consider The Howard Johnson restaurant brand dead, despite the single persisting location still using the name to serve food that bears little resemblance to the cuisine that once helped Howard Johnson become the largest restaurant chain in the US.

Even though the restaurant brand is effectively defunct, it hasn’t stopped me from exploring other remnants of the fractured HoJo empire. In the earliest days of this blog, I stayed in an EconoLodge that began life as a Howard Johnson motor lodge with a HoJo restaurant on site. I also spent a night in a former Signature Inn that had been hastily converted to a Howard Johnson hotel. Neither was an especially pleasant experience, but I imagine a meal at the Lake George HoJo would be worse.

Despite the unfortunate demise of of the Howard Johnson restaurant brand, other restaurant concepts launched by Howard Johnson still have operating remnants today, the largest of which seems to be Ground Round. The Howard Johnson company opened the first Ground Round in Massachusetts in 1969, offering both a bar and grill atmosphere and a family dining atmosphere under one roof, but largely separated under that roof. The chain spread quickly across the Northeast and Midwest, and peaked somewhere north of 200 locations. People who grew up with Ground Round will likely have fond memories of shenanigans employed in the day to day operations of the restaurant.

In their 1970s heyday, Ground Round employed a litany of Uncle Moe’s Family Feedbag style gimmicks to appeal to families, including showing silent (and not so silent) films and cartoons on a large projection screen in the dining room, though Shakey’s may have done this first. Children would be weighed upon entry to the restaurant and their caretakers would be charged a penny for every pound the child weighed for the child’s meal. Free peanuts were also offered, and guests were invited to toss the empty peanut shells on the floor, not unlike Texas Roadhouse and Logan’s Roadhouse who have been known to employ the same policy off and on.

Ground Round’s fortunes went through the usual ups and downs as they were traded among a slew of corporate parents over the years, but the chain fell apart in earnest when in 2004, American Hospitality, owner of the brand at the time abruptly closed all 59 company owned Ground Round locations shortly before declaring bankruptcy, leaving the owners of the remaining 72 franchised locations to fend for themselves.

The newly disenfranchised franchisees came together to form Independent Owners Cooperative LLC to maintain the integrity and value of the Ground Round brand, much the same way Howard Johnson restaurant franchisees formed Franchise Associates Incorporated decades earlier. Since that time, the Ground Round brand has been losing locations, and is down to only 17 operating restaurants scattered across seven Northeastern and Midwestern states. I found myself in Western Wisconsin at the tail end of a 5 day 2500 mile road trip, and stopped into one of those 17 surviving Ground Rounds for dinner after a long day on the road.

It was just before sundown on a Sunday night when I arrived at the Tomah, Wisconsin Ground Round, which is situated at the end of a strip mall. Predictably, the restaurant was mostly empty, and I was shown to a table on the non-bar side of the restaurant at my request. I took a few minutes to take in the atmosphere of the place. It was dimly lit by a series of can lights and stained glass lamps hanging from the open ceiling. There were no signs of a child weighing station, but a framed peanut bag and framed photos of the Three Stooges and Marx brothers adorning the walls provided subtle nods to the brand’s gimmicky heritage. The wackiness quotient was very low overall. The place had a very generic casual dining vibe.


I turned my attention toward the menu packed with large burgers and other typical casual dining type offerings. There was a problem, though. I wasn’t remotely hungry. I had eaten two meals back to back at the last operating Embers only 3 hours and 180 miles prior, so I couldn’t bring myself to order a burger at Ground Round. Out of a sense of self preservation, I opted to eat light, and when my server came, I ordered the “Lighter portion” of the balsamic chicken from the “Better for you” section of the menu. Yes, I ordered chicken at a place called Ground Round. Yes, I acknowledge I can no longer give Esmeralda Fitzmonster a hard time about ordering chicken the one time I convinced her to go to Rax with me.


My meal began with a salad composed mainly of iceberg lettuce served on a square green plate. The salad itself was not terribly impressive, though the fact it was served with a chilled salad fork was novel, if incongruous with the salad’s pedestrian ingredients. When my entree arrived, I couldn’t help but laugh at the presentation, which featured more condiments than actual food. I attribute this to my own limited appetite forcing me to order a light portion, and an overabundance of condiments, rather than stinginess on the part of the restaurant. My plate came loaded with four ramekins containing, a butter sauce and a bruschetta topping for my one small chicken breast, plus, curiously, sour cream and butter for my single scoop mashed potatoes. Where I come from, this stuff gets mixed into mashed potatoes before they’re served, but what do I know? I added the toppings to the chicken so it resembled the picture on the menu a bit more, and mixed in some sour cream with the potatoes.


I try to eat a healthy-ish diet when I’m not on the road, and I’ve been known to order this kind of thing at restaurants that I have no intention to write about. As healthy meals go, this one was well-prepared, and tasted fine for what it was. Like present-day Ground Round, it was devoid of gimmicks and served its purpose well. What I needed that night was a light meal that would allow me to get a good night’s sleep for the final leg of my trip the next day, and that’s what I got. Had I ordered the chicken fajita egg rolls, pulled pork-topped Little Piggy Burger, or beef taco flatbread pizza that also appear on the Ground Round menu, and forced them through my digestive tract soon after both an Emberger and a breakfast skillet, I would have had a miserable, sleepless, gastro-intestinal distress-racked night. Instead, I ate light, and I’m thankful that I did. I’m also thankful that Ground Round was able to easily accommodate my requirements. 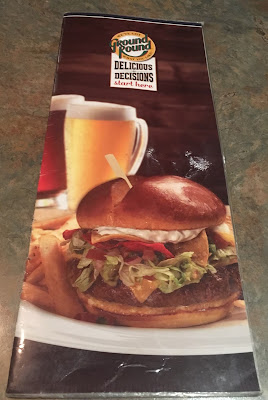 Had I not been planning a meal at Ground Round for weeks, I would have skipped dinner entirely that night, but I was traveling on a tight schedule, and this was my one chance at a Ground Round experience. For their part, Ground Round did what the Howard Johnson brand was known for in its heyday, they catered to my specific needs. After a long day on the road overeating, I needed a light meal that could be enjoyed within the walls of a Ground Round, and that’s exactly what I got. The large menu was typical for the casual dining segment, and its wide array of dinner entrees, burgers, sandwiches, appetizers, and desserts means that most anyone who comes in will also get what they need from Ground Round. The almost completely separate bar and dining areas also allows Ground Round customers to get their preferred atmosphere along with their preferred meal, and in that willingness to cater to a diverse clientele, the Howard Johnson DNA shines through in the fading remnant of the Ground Round brand.

Howard Johnson called itself the Host of the Highways, and like any good host, they took pains to ensure the comfort of guests, whether they were stopping in for a quick scoop of ice cream, a fried clam dinner, or spending a night or two in Howard Johnson hotel. A 1960s vintage Howard Johnson print ad hanging framed on my living room wall brags that they cater to all size appetites, and I’m glad to report that their descendant, Ground Round, endangered as they may be, does exactly the same thing more than half a century later. The surviving franchisees have figured out what works about the brand and what doesn’t and distilled it to a casual dining concept that still upholds the Howard Jonson ethos better than the last restaurant using the Howard Johnson name ever could. I don’t even lament the loss of the silent movies and peanuts. Does anybody really need silent movies and free peanuts when they're dining out? I know I don’t.

Broken Chains Store
(Use the code OLIVE15 at checkout to receive 15% off your order through the end of the year.)