I noticed too late that my previous blog post was published on the one year anniversary of my very first Broken Chains post. That’s right, Broken Chains is officially a year old. In that year, I’ve had a long list of unique experiences, learned a lot about endangered restaurant and retail brands, and traveled untold miles. I like to think I’ve become a better writer as well.

I also take comfort in the thought that this blog is held together by a series of rules and guidelines I’ve imposed on myself that includes my working definition of what a broken chain is:

“A business which, at some point in its history, had multiple, similarly-functioning, physical locations where a customer could purchase goods and/or services which presently has a significantly diminished presence and/or value as a brand compared to the same brand in its heyday.”

When I wrote that definition, I was about to explore Ponderosa, larger than any chain I had previously covered with around 60 locations. Since then, I’ve written posts about diminished chains like Blimpie and Shoney’s that still boast three figure location counts. I’ve also written about chains like Burger Chef and Red Barn that officially have zero remaining locations, but still have unofficial locations open, operating under different names by holdout franchisees.


Joe Croce and Mike Cole opened their first pizza joint in Plano, Texas in 1985, using the name Cici’s because both their names started with the letter C. (Contrary to popular belief, they never left the pizza business to open a music factory.) Their takeout pizza business eventually evolved into a buffet restaurant after they began offering a lunch buffet to generate midday foot traffic. The buffet proved more popular than takeout, and franchised Cici’s locations with all day buffets and takeout service began popping up. The chain grew steadily through the ‘90s with Croce as CEO. By the time Joe Croce retired in 2003 and sold his stake in the business to the management team, there were 420 (Nice!) locations in operation.

It was around this time that I discovered Cici’s. I was in high school in Central Kentucky, and was perpetually in search of places where I could stuff my teenage face for very little money. I was working at McDonald’s after school and on weekends, and handed significant portions of my paycheck back to the company on my days off by buying dollar menu double cheeseburgers and McChickens. Likewise, I could often be found at Taco Tico on Sunday afternoons when they sold 49 cent tacos and burritos. When Lexington’s first Cici’s opened at the then-struggling, and now defunct Turfland Mall, it became one of my favorite hangouts.

Access to the buffet cost an astoundingly cheap $3.99, which grew only slightly to five bucks and change once you added a drink and sales tax. For that price, you got unlimited salad, dessert, pasta, and pizza. The pizza crust had an unmistakably cardboardy quality, but you could eat as much as you wanted, and even bad pizza is still pretty good food. I used to devour heaping plates of the flimsy slices. The low price made Cici’s popular with everyone. There’d usually be a pretty diverse crowd eating there, at least more diverse than you’d expect for a pizza buffet with an arcade in the back.

Several more Cici’s locations opened around Lexington, mostly in similarly diminished, and presumably cheap to rent retail spaces, but not long after the 2008 recession, they all closed abruptly. In 2010 Cici’s had 650 locations, and plans were announced to open another 500 by 2020. With less than a year left for them to accomplish this goal, Cici’s Pizza has instead shrunk back down to 423 locations spread across 30 states. However, more than half of those locations are in just two states, Texas and Florida, while ten states are home to three or fewer Cici’s locations. In the past nine years, Cici’s has gone from being the fastest growing pizza chain in the US with a near-national footprint to a regional chain with a few vestigial outposts scattered around the country, ruins of their fleeting empire. Maybe the recession was a factor limiting their growth. Maybe they failed to anticipate the spike in popularity of home food delivery and the decline in the popularity of buffets, or maybe the rate of growth they experienced in the late ‘90s and early ‘00s was simply unsustainable.

Aside from a single meal I had at an Ohio Cici’s a few months before writing my first Broken Chains post, I hadn’t been to Cici’s Pizza in over a decade. While I’m sure there are shining examples of locations that exhibit Cici’s current approach to operation, image, and branding in their core markets, I was more interested in checking out, and geographically closer to, the vestigial locations, long ago isolated by the brand’s retreat. That’s how I ended up at the Goshen, Indiana Cici’s. 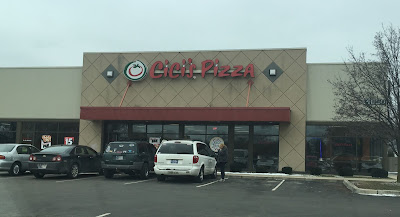 I arrived a few minutes after the restaurant’s 11 AM opening time on a Saturday, and parked out front. The building housing the Cici’s is a two-slot strip mall, and the other slot is occupied by a liquor store. The front facade of the building was visibly dirty, in need of a good pressure washing, and as I was walking from my van to the front door, a large group of other patrons, that seemed to consist mainly of unruly children and an indifferent adult or two, materialized in front of me.

As I waited for the group in front of me to conduct their transaction and cacophonously disperse, I examined my surroundings. The dining room had several rows of booths, literally all of which had torn cushions. (I checked!) The L-shaped buffet was nicely stocked, but exposed plaster and a gaping hole were present on the ceiling over the salad bar, as if some fixture had been hastily removed or simply fallen off. Most of the logos and signage on display were just as they were when I first discovered Cici’s at Turfland Mall more than 15 years ago. The newer exploding pizza logos from their website were nowhere to be found. I did not intentionally seek out a dilapidated Cici's location. This is the one that happened to be closest to the route I was planning, but if one Cici's, picked at random is in noticeably rough shape, then there are sure to be others in this condition or worse.


When it was my turn to order, I asked for a buffet and drink, and ended up paying over $8. Factoring for inflation, this isn’t a terrible price for a lunch buffet. Unlimited lunchtime pizza is over $10 at my local sit-down Pizza Hut, and there's not nearly as much variety as there is here. At some point since my teenage years, Cici’s had ditched reusable cups and implemented disposable paper ones, presumably to keep costs down. I was a little sad to see visual evidence of them cutting costs, but happy to have a souvenir. The cup was the only time I saw the exploding pizza logo on this visit.

My strategy at buffets is to start with a salad, mainly to fool myself into thinking I’m eating healthily before loading up my next plate with a pile of carbs. Cici’s current salad bar is on the small side, but seemed generally clean and well-organized. The dressings were in novel containers that reminded me of IHOP syrup dispensers and fit into interlocking slots. Weirdly, there was no grated cheese on the salad bar, but there was a decent selection of vegetables. I loaded my plate with an unintentionally vegan first course and topped it with an acidic Italian dressing. It was perfectly acceptable, but lagged far behind the salads I’ve been able to craft at Rax or Bonanza Steak and BBQ.

Having mostly finished my salad, I was ready for pizza. I stacked several slices on my second plate and returned to my table. The deep pan crust slices tasted about the same as they always had, but the thin crust offerings were more airy and chewy than previous experiences with Cici's had trained me to expect. The Cici’s cardboard crust pizza that I had come to know and tolerate was gone and replaced with a more premium tasting product. The toppings and sauce were basically as I remembered them, including the delightful barbecue chicken pizza, but vastly improved by a crust made of honest to goodness flour instead of what I could only assume was sawdust back in the old days.

Pleasantly surprised, I worked my way through my second plate, and returned to the buffet for the dessert course. I picked up the brownies and cinnamon rolls with which I would always conclude my adolescent Cici’s meals. I also picked up a slice of the macaroni and cheese pizza, because a wedge of carbohydrates topped with more carbohydrates is decadent to the point that I consider it a dessert, regardless of its sugar content. The soft buttery cinnamon rolls were as they were in my memories, as were the perfectly undercooked brownies. Something was lost in translation with the macaroni and cheese pizza slice though. The fluffier crust overpowered the subtle flavors and textures of the toppings. Macaroni and cheese seems to be the one pizza at Cici’s that works better on the old crust.

In 2016, following Cici’s failure to meet their projected growth goals, and in the midst of an ever-falling location count, the languishing Cici’s brand was acquired by The Arlon Group, an investment group with a subsidiary that owns several Taco Bell, KFC, and Golden Corral franchises. The new parent company’s familiarity with the restaurant industry seems to be benefiting the Cici’s brand. The food’s previous shortcomings have been addressed while the classic Cici’s flavors have, for the most part, been nicely maintained, all without a major inflation of the price.

While Arlon is doing their part to keep Cici’s running, the indifference of owner of the franchised location I visited was palpable. While the food was great, and the place was reasonably clean, it had clearly fallen into disrepair. As a result, it didn’t seem terribly popular with the locals. Aside from myself and the large group in front of me, maybe two to three other tables were occupied at lunchtime on a Saturday. It seemed as though the owner was caught in a feedback loop of reduced popularity and profits leading to deferral of maintenance and repairs leading to further reductions in popularity leading to further neglect.

Still, the Arlon Group seems willing and able to revitalize the Cici’s brand. By my own definition it's barely a broken chain. With the right strategy, it's a chain that can be mended and revitalized, and that may one day thrive again. Arlon would do well to cut some of the weak links loose from the chain, and recruit and vet some new franchisees to help grow the brand into new markets. My own personal market of Metro Detroit is a vacuum when it comes to all-day pizza buffets, and I'd love to have a Cici's in my neighborhood.

If you're a fan of Broken Chains, be sure to like our Facebook page to receive updates about new posts and occasional bonus pictures from my travels.
Posted by Zap Actionsdower at 7:10 PM