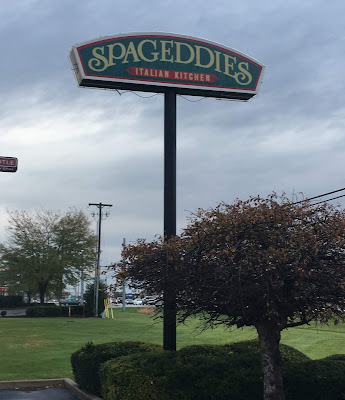 While most present-day broken chains tend to operate similarly, occupying some space of the broken chain spectrum ranging from decline under ownership of an inept corporate parent to a state of being completely defunct, the overarching story of how each chain got to its current state tends to be much the same, regardless of which chain I write about. It’s usually some combination of a series of changing market trends and poor business decisions that causes a chain to decline sufficiently to be worthy of my attention. Where the stories differ is in the founding of each chain.

For every business that is the result of long hours of labor by an individual, or a small group of partners, there’s another that’s the creation of a faceless corporate overlord, filtered through marketing departments and focus groups before opening its doors to the public. Despite efforts to the contrary, these brands created by committee can fail just as spectacularly as their grassroots counterparts. Some were so ill-conceived that they barely existed at all. That’s the case with Spageddie’s, a little chain created by a big company.

It was the early ‘90s, and Brinker International, parent company of Chili’s and a litany of other restaurant chains off and on over the years, was looking to expand its portfolio of Italian restaurant concepts to compete with General Mills’ Olive Garden. Brinker had recently acquired Romano’s Macaroni Grill and was interested in creating a downmarket companion Italian chain to compete in more segments of the market. Spageddie’s was their effort to fill this gap. A test location opened in Plano, Texas in 1992. From there, Spageddie’s grew to around 20 corporate and franchised locations stretching from Florida to Michigan, each boasting a menu developed, in part, by Brinker executive chef Johnny Carino, who would eventually go on to leave Brinker to start his own restaurant chain. Poor sales led Brinker to sell off Spageddie’s in 1997. Quality Dining Incorporated, a Chili’s franchisee, and perhaps the only Spageddie’s franchisee was the buyer. 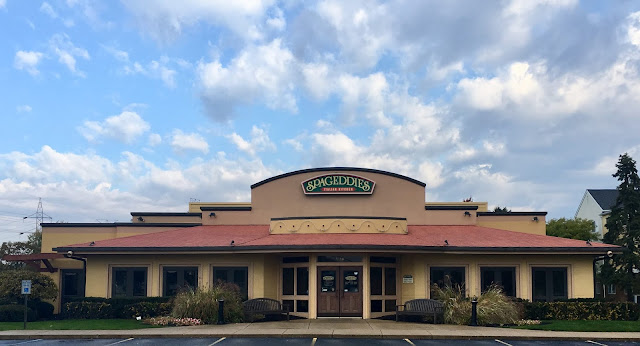 Following the ownership change, Spageddie’s locations slowly closed over the next two decades eventually, leaving just one location open in Lafayette, Indiana. On my way out of town the day after eating two meals at nearby Dog ‘n Suds locations, I stopped by for lunch to see what the world’s last Spageddie’s had to offer. I was taken by surprise when I saw the building’s facade didn’t match what I had found on Google. It seems the quintessentially ‘90s structure had undergone a renovation since the photo was taken. The building had been toned down considerably compared to its initial appearance and foreshadowed an utterly generic experience.


It was just after opening, 11:00 on a Sunday, and I was quickly shown to a table. Every trope of Italian restaurant decor surrounded me. Plastic grapes spilled out of a wooden wine press, while giant wooden circles on the wall symbolized casks of Italian wine in the next room, though the only thing present on the other side of the wall is the parking lot of the Quality Dining-owned Chili’s next door. Italianate bottles of mystery liquid adorn nearly every flat surface in the place. The walls were painted to resemble Tuscan Marble, but whole setup felt about as Italian as the Super Mario Brothers, and as generic as Pong.


My server arrived and presented me with a complimentary appetizer, a loaf of bread which came with a plate of toasted garlic and olive oil. She also presented me with a menu that had no writing on the front cover. Inside the names of the menu items made repeated references to “Papa.” As I suspected, the last operating Spageddie’s seems to have an identical menu to Papa Vino’s, Quality Dining’s other Italian concept, which has two locations of its own in operation nearby. After thoroughly inspecting the menu, I ordered chicken Parmesan, my go-to Italian restaurant order, and was a little surprised when the server failed to ask any follow up questions about my preferred salad and dressing. Unlike every Italian restaurant ever, a salad doesn’t come with your entree at Spageddie’s. This is one of the few attributes that made Spageddie’s feel unique. It’s a shame it wasn’t a positive one.


When my order arrived, I noted it’s generous portion with three large chicken cutlets on a bed of pasta. I would have rather had a smaller entree and a salad, but near as I could tell, that wasn’t an option. The execution of the food was competent, but unremarkable beyond its size. I managed to eat about half of it before I threw in the proverbial towel.

An otherwise underwhelming experienced was brightened by the bathroom wall which was adorned with larger than life, photo-realistic pizza wallpaper. I found myself wishing that the distinctive toilet pizza aesthetic extended to the whole bland establishment. Sadly, I can’t see this uninspired iteration of Spageddie’s ever escaping small town Indiana obscurity. There’s still a glimmer of hope for the Spageddie’s brand, though.


Brinker sold only the domestic rights to the Spageddie’s name, meaning that outside of the United States, Brinker can open as many Spageddie’s locations as they like. I propose they relaunch the brand in Canada, reaching into their deep pockets to throw the requisite number of loonies and twonies at Rush frontman Geddy Lee for him to agree to be the spokesperson for the chain, which will, of course, be rebranded as SpaGeddy’s.

A Geddy Lee spokesmanship makes sense beyond the obvious name association. Lee has a distinctive look that lends itself well to marketing materials, and is well-liked by the public in his role as Canada’s preeminent rock and roll grandpa. He’s also a wine enthusiast, and could assist with the curation of a Geddy Lee-branded wine list that would be sure to increase SpaGeddy’s wine sales and bottom line. Restaurant decor could forego the standard Italian Restaurant trappings and adopt a sci-fi prog rock aesthetic to match their spokesman’s image. What could be more fun than chowing down on a plate of SpaGeddy and meatballs with Red Barchetta sauce in a dining room with its own laser light show projecting visuals to match 2112 or La Villa Strangiato being played simultaneously? Assuming proper execution, the restaurant would have massive appeal to Rush fans, which is to say, all Canadians. Perhaps the slight change in name would allow for expansion back into America without infringing on Quality Dining’s rights to Spageddie’s in the U.S, but SpaGeddy’s should follow Rush’s path to success, honing it’s act for a crowd of friendly Canadians before attempting to generate widespread appeal in America and the rest of the world.

With a little imagination, and infinite resources, Spageddie’s in SpaGeddy’s guise could offer a unique and memorable experience to its patrons. It’s a shame we live in a world of finite resources with a Geddy Lee who chooses free will, and therefore has the ability to turn down a generous offer to lend his name to a restaurant chain.

Special thanks to Mike from Houston Historic Retail for researching Spageddie’s and tipping me off to their existence.

Also, I recently wrote an article for Tedium about my experiences visiting broken chains. You can check it out here.

Posted by Zap Actionsdower at 4:05 PM