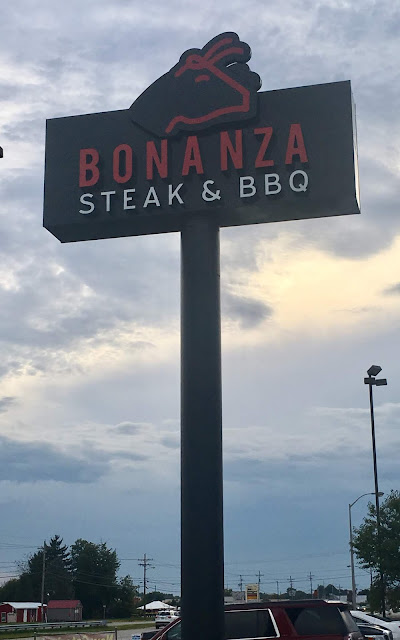 In the early sixties, the American automobile manufacturer, Studebaker was short on cash and struggling to remain relevant in an increasingly competitive marketplace. In a last ditch effort to attract consumer interest, they threw every available resource at designing a distinctive new car, the Avanti. With its minimalistic yet stylish fiberglass body, the Avanti looked nothing like any other car Studebaker, or anyone else had ever made and was an instant classic. Ultimately, the Avanti wasn't enough to save Studebaker from bankruptcy, but the car, designed and produced with minimal time and cash to spare by a company fighting for its life, became a symbol of going out in style. I recently encountered the Studebaker Avanti of steakhouses. 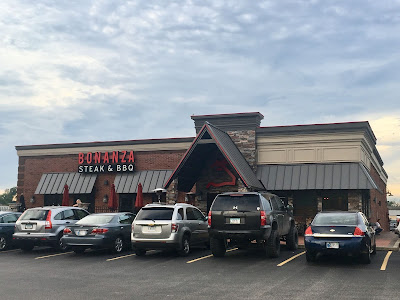 A few months back, I spent a weekend traveling around Michigan to dine at four completely different Ponderosa Steakhouses. I found that the food, buildings, staff and overall experiences varied wildly depending on the location. I haven’t felt much desire to eat at a Ponderosa since, but I’ve remained curious about Ponderosa’s competitor turned sister brand, Bonanza.

Ponderosa and Bonanza barely survived the Great Recession. Their parent company, Metromedia, declared bankruptcy in 2008, but emerged with a new name, Homestyle Dining LLC, and a plan to modernize their aging restaurant concepts. In 2014, a year after the fiftieth anniversary of the Bonanza brand, There were plans to revitalize Ponderosa locations with badly needed building and signage upgrades as well as new menu items to attract a younger more health conscious clientele. Additionally, the Bonanza brand would be completely reimagined to differentiate it from the nearly identical Ponderosa concept. The plan was to move the Bonanza brand upmarket and rebrand it as Bonanza Steak and BBQ. Additionally Homestyle Dining introduced a fast casual steakhouse concept known as Cole’s Backyard Grill. Plans called for opening 100 franchised locations of each new concept over the next five years.

Plans changed suddenly in 2017 when Homestyle Dining LLC was purchased by FAT Brands, who owns Fatburger as well as a few other restaurant brands. Prior to the buyout, Homestyle Dining LLC hand managed to open one Cole’s which has since closed, and two Bonanza Steak and BBQ locations. The first Bonanza Steak and BBQ in Eureka, Missouri opened in 2015 and closed a year or two later. The second, the remains open in Seymour, Indiana. FAT Brands appears to have all but abandoned the new concepts as well as all North American Ponderosa-Bonanza operations in general, in favor of growing the brands internationally. Ponderosa and Bonanza seem to ultimately be doomed to the same fate as other brands like Chi Chi’s and Kenny Rogers Roasters, whose owners abandoned the American market entirely, but still exist abroad.

My initial plan was to visit the Seymour, Indiana Bonanza Steak and BBQ as well as a still-operational 1960s vintage, old concept Bonanza location in Lincoln, Illinois in order to compare and contrast the original and new Bonanza experiences. Unfortunately, multiple recent customer reviews of the old Bonanza in Lincoln stating live cockroaches were seen on the walls, tables, and salad bar deterred me from eating there. I'll therefore be forced to use my previous experiences at Ponderosa for comparison, which should be reasonably close, as old concept Bonanzas seem to function nearly identically to Ponderosas. Likewise, my local Ponderosa is housed in a former Bonanza building of the same vintage as the Lincoln, Illinois Bonanza.


(I’ll have to visit one of the old, and hopefully cleaner, Bonanzas in Pennsylvania in the name of completionism at some point, but that’s another blog post.)

I kicked off my Labor Day weekend road trip with a dinner stop at the sole surviving Bonanza Steak and BBQ. I was driving my vintage Ford Festiva, as I had plans to meet up with some of my Festiva-loving friends later on in Illinois. Though it's not without its own merits, my Festiva is no Avanti, and I was really feeling all of the 330 or so miles I had driven in my 25 year old economy car with no A/C to get there from Michigan by the time I pulled into the mostly full parking lot. I walked in the building's front door and was greeted by more branded material than I was expecting, including signs with both the original Bonanza logo and the Bonanza Steak and BBQ logo. A near life size cardboard cutout of NASCAR driver Chase Elliot was advertising a contest that was current at the time, but has since expired. It's the only official marketing material I've ever seen for the Bonanza Steak and BBQ brand.


It was around 7:30 PM on a Friday evening, and the place seemed relatively busy. The dining room was full, and there were a few people waiting for a table, seated on padded benches just past the entryway. Since I was by myself, the host sat me at the bar right away. A couple of things struck me as unusual right away. No one took my order before seating me, as is the case with most Pon-Bon locations, and this location has a bar. I've only encountered a single Ponderosa that offered beer and wine served to you at your table. Most don't seem to have liquor licenses at all, but this one had a full bar, with a bartender to hand me a nicely printed hardcover menu and take my order. I assume there would be regular servers in the main dining area.


The hot food buffet and dessert bar, longtime staples of the Pon-Bon chain, and monuments to quantity over quality, were also noticeably absent, however, there was still a salad bar, which was massive, close in size to the entire salad bar and buffet combined at my local Ponderosa. The salad bar felt new and modern, with its refrigerated slab holding salad ingredients in large porcelain serving trays. An employee was nearby to ensure that the entire operation remained clean and well stocked. It appeared to be her sole job duty. While a salad bar would be considered a mark of a low end restaurant by some, this one thanks to its appearance and quality actually managed to feel upscale, while providing a nice nod to the Bonanza brand's heritage. I was also able to make myself a really great salad. I wish I had a salad bar this good near my office. I'd have a salad for lunch every day, and in turn, be able to consume more empty calories at oddball fast food joints and then write about them on my silly blog.


My steak arrived in a reasonable amount of time, and was nicely prepared and topped with a tasty herbed butter. It tasted like a better quality of meat than I would normally get at my local Ponderosa, but it was the same cut I always order. It also came with four hot yeast rolls, not unlike those found on Pon-Bon buffets, as well as a large cup full of cinnamon butter. I also got a baked potato, which was nicely prepared, but it's tough to screw up a baked potato.


There's a live musician here, playing guitar and singing mostly southern rock tunes from the '70s. As I'm eating, he starts into CCR's "Midnight Special," singing, "Ain't no food upon the table, and no pork up in the pan." and pauses for a minute to interject, "They ain't at Bonanza!" He's only part right, though, there's plenty food upon the table, but surprisingly little pork up in the pan for a place with BBQ in its name. The only barbecue inspired items on the menu seem to be ribs, pulled pork, and a smoked prime rib, which I should really try on my next visit.

Despite the limited selection of smoked meats on the menu, just about every aspect of Bonanza Steak and BBQ feels modern, and compared to the dingy, dated, and overpriced Ponderosas I've experienced, I can safely say that this concept is a definite improvement over the antiquated Pon-Bon model. Nearly all aspects seem more upscale and modern without seeming overly generic. It's everything I prefer this location to three of the four Ponderosas I visited previously. (The Ponderosa in Bay City, Michigan retains it's #1 spot thanks to better than average quality buffet fare and unintentionally entertaining patrons.) It's not really any more expensive to eat here than it is at any of the Ponderosas I've experienced. Having ordered a ten ounce sirloin, salad bar, a potato and a soft drink, I was out the door for under 25 bucks, including a tip for the bartender and another for the musician. I've had much worse meals for more money at Ponderosa.

The exterior building design feels thoroughly modern and vastly more upscale than the average Pon-Bon. The architecture is tasteful and restrained, if a bit generic. Old Google Street View images show the building was previously a Max and Erma's, but even the striking Studebaker Avanti rode on the same chassis as its predecessor, the humble Studebaker Lark. I imagine a stronger corporate image plan might have come later had the concept had the opportunity to grow. It would be great to see FAT brands attempting to open more US locations, but that doesn't seem to be happening anytime soon, as they have their sights set elsewhere in the world. 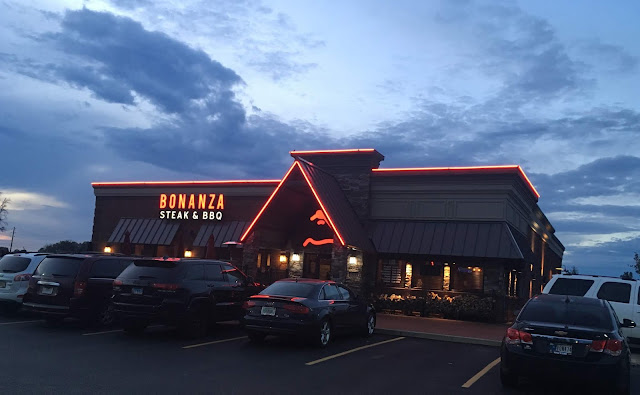 As solid a concept as Bonanza Steak and BBQ seems to be, it seems to have been too little too late to keep Pon-Bon relevant. Though both the Pon-Bon and Bonanza Steak and BBQ websites state that franchises are available, I don't think they're getting many bites, due to better franchise arrangements being available from other brands and/or the diminished state of the Ponderosa and Bonanza names in the US. FAT Brands has owned Ponderosa-Bonanza for nearly a year at this point, and from the perspective of the customer, they seem to be doing little to revitalize existing locations and re establish a dying chain that was once 1,200 locations strong. I suspect things will get worse for the 100 or so remaining US locations before they get better, but I'm happy to have experienced Bonanza Steak and BBQ, as the final push of a corporate parent to revive an ultimately doomed brand that resulted in a stylish and memorable product. 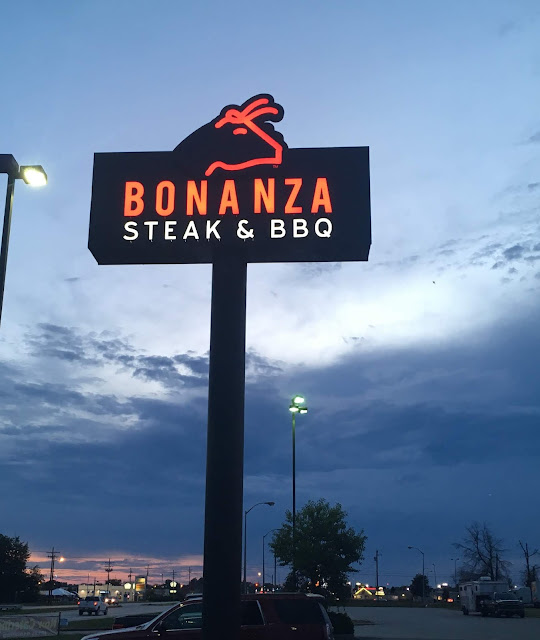 Following the end of Avanti production, a pair of Studebaker dealers purchased the rights to the Avanti name as well as the manufacturing equipment and space, and survived as a boutique manufacturer, building Avantis in small numbers. Avanti cars would be built in some form or another for the next 40 years following Studebaker's demise. I sincerely hope that Bonanza Steak and BBQ can continue on for at least that long after the last of the US Ponderosas and Bonanzas close for good. It's every bit as deserving of a long life on the market as the Avanti was.
Posted by Zap Actionsdower at 8:22 PM