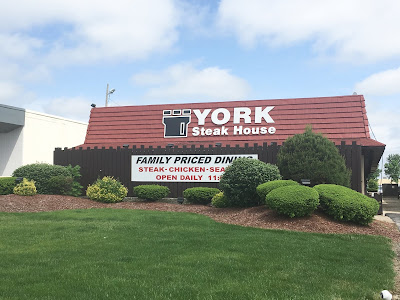 My parents’ courtship in the late seventies was apparently full of shared meals at locations of what are now broken chains. I grew up hearing stories of my mother bringing Zantigo tacos home in her purse and forgetting about them for days. When we would visit Lexington, Kentucky’s Rupp Arena when the circus was in town, my father would point out the small shopping mall inside the arena building that once housed Lexington’s Magic Pan location where he and my mother would go to eat crepes and feel fancy. When my parents wanted to feel fancier than eating at Zantigo, but not Magic Pan fancy, York Steak House was their dining venue of choice. I don’t recall ever eating at a York as a kid, but I feel like I owe some small part of my existence to York Steak House.

The first York Steak House opened in 1966 partially in response to the success of Ponderosa. Locations were often built near shopping malls which were sprouting up at the same time, in order to attract hungry mall shoppers. The chain peaked just shy of 200 locations, mostly in the eastern U.S. Though the chain had cafeteria style service, an emphasis was placed on high quality ingredients and a memorable experience. Cashiers would relay orders to the kitchen verbally, in French, to give the place an exotic feel. In 1977, General Mills bought York and began making changes to increase profitability. They began cutting corners and added a salad bar, likely to cut down on labor costs. These changes coupled with the shopping mall building boom beginning to taper off resulted in growth of the brand stagnating. Most York Steak Houses closed in the late eighties.


Today, there is a single York left in operation, located in Columbus, Ohio. It’s owner, Jay Bettin, a longtime York manager bought the restaurant in 1989 and operated independently as Jay’s York Steak House, dropping the Jay’s after the trademark on the York name expired. The mall across the street is completely empty and shuttered. A nearby casino is what draws customers in these days. I was recently in Columbus for a Festiva meet, and stopped by York for lunch on my way out of town.


I found my way to the York Steak House late on a Sunday morning a few minutes before they opened, which afforded me the chance to appreciate the exterior of the tan stucco building with its distinctive red mansard roof. The exterior signage definitely had a vintage feel and appeared in good condition. Upon entering the building, I was greeted by a massive menu board with backlit larger than life photos of every entree. The interior is a bit disorienting. The building’s parking lot and main entrance are at the rear, and you walk down a long corridor around the interior perimeter before reaching the order counter. The building also has no windows. I could see how so many have beloved York Steak House memories. The giant pictures of food, and the dim labyrinth up to the order counter certainly make strong contributions to an immersive and unique experience.

Upon reaching the dated but clean stainless steel order counter, I order up York fillets, two small cuts of beef, each topped with an individual fried onion ring. Disappointingly, the cashier doesn’t yell my order to the kitchen in French, or any other language. Undeterred, I venture on down the serving line, picking up a piece of coconut cream pie from the dessert station, a plate for the still-in-use General Mills-era salad bar, and a glass, which I fill with ice and Orange Lavaburst Hi-C. Like many Ponderosa locations, York doesn’t serve alcohol, and I get Orange Lavaburst whenever I see it on tap, ever since McDonald’s stopped selling it. My final bill is $25 and change, not a bad price considering I ordered an expensive cut and got a dessert. I could have gotten an 8 ounce sirloin for half the price.

I carry my logo-adorned antique tray with pie, a salad plate, silverware, and my brightly colored beverage out to the dining room and grab a seat. Like every other part of the building, the dining area appears perfectly preserved, as if encased in amber, just as the Evansville G.D. Ritzy’s were. Lighting is dim, and the walls are adorned with mouldings meant to resemble the battlements of a castle. Tables, chairs, and booths all appear original, but have no doubt been recovered. I pick up my empty plate and head to the salad bar and was delighted to find that the salad ingredients were just as stuck in time as the rest of the place. Instead of fancy mixes of romaine and spinach, the only leafy greens present was shredded iceberg lettuce. Fake bacon bits were also present, along with carrot shreds and thin tomato slices that appeared to have been cut in-house. No labor-saving cherry tomatoes or pre shredded carrots here, because they weren’t commonly used in the ‘80s. In addition to a handful of other raw vegetables, there were also individual cups of Jell-O, marked by an engraved sign that looked older than I am informing the world that the red Jell-O is now sugar free. I load up a plate with a salad and snag some green Jell-O and head back to my table. I had just finished watching Wild Wild Country and idly thought about how this 1980s salad bar was probably a lot like the 1980s salad bars in Oregon that the Rajneeshees poisoned. The dining room has begun to fill up, mostly with older people and families. I don’t see anyone wearing varying reds and maroons hanging around though, so I keep eating undeterred.

Just as I’m finishing my salad, the server brings out my steak along with a baked potato and a dense yeasty roll the size of a hamburger bun. I’m delighted to see that everything looks exactly as it did on the menu board, including the onion rings on my steaks. The meat is tender and flavorful, well worth the price. The pie is pretty good too, and I can’t help but feel that I’ve had a genuinely unique dining experience as I walk out to my car, just as countless other York Steak House diners have felt before me.

Like the last Hot ‘n Now, the last York Steak House is impeccably run and beautifully maintained. haven’t had much desire to go back to Ponderosa since writing about them, but I’ll definitely go back to York Steak House the next time I’m in Columbus. I’ll have to figure out a way to get two meals in the same trip though because the Webbs have really been making progress on their new G.D. Ritzy’s on the north side of town. I’m hoping it will be open this summer.
Posted by Zap Actionsdower at 8:14 PM