A Chicken in Every Fryer

In my previous post, I once again violated my oft-broken, self-imposed rule against embedding political commentary in posts on my silly fast food blog. My excuse for breaching my personal code of conduct is that where I come from, the fried chicken industry is inseparable from politics. After all, it was by successfully leading the investment group in the purchase of Kentucky Fried Chicken from Col. Harland Sanders, and turning the operation into a modern, successful fast food concept, that Lexington-area lawyer turned businessman John Y. Brown Jr. was able to parlay his success and name recognition within the Bluegrass State into a successful run for governor in 1979. Furthermore, it is my belief that the fast food fried chicken industry once played a not insignificant part in determining the outcome of a presidential election.

Around the same time that John Y. Brown Jr. was active in the fried chicken and political spheres, Tennessee had its own chicken-hawking Democratic candidate for governor. He was even named John, but if John Y. Brown of Kentucky was the Mozart of fried chicken and Democratic state politics, his Tennessee counterpart, Nashville lawyer and businessman John Jay Hooker, was surely Salieri. Fresh from failing to win his party’s nomination for governor in 1966, Hooker noted Brown’s success and set out to become his competitor, sourcing a fried chicken recipe and a similarly folksy and rural spokesperson, namely Grand Ole Opry and Hee-Haw fixture Sarah Ophelia Colley Cannon, better known by her decidedly more Opry-friendly stage name, Minnie Pearl. Questionable accounting practices and general mismanagement brought about the venture’s demise when it had around 50 locations open, and while he was never convicted of any wrongdoing associated with the Minnie Pearl’s Chicken brand, Hooker was the subject of an SEC investigation into the practices of the failed business. Hooker believed that the investigation was launched by the Nixon administration in an attempt to damage his reputation as a politician. However, in the wake of the Minnie Pearl’s Chicken debacle, Hooker did manage to win the 1970 gubernatorial primary, but would ultimately fail to win in the general election. Back in Kentucky, John Y. Brown, presumably, was inspired by this loss and felt the need to show up his Tennessee rival in a second field when he successfully ran for governor of Kentucky a few years later.

Fast forward a couple of decades, and you’ll find Al Gore running for president against George W. Bush in 2000. Prior to serving as Bill Clinton’s vice president for eight years, you may recall that Gore represented Tennessee in both houses of Congress, as did his father before him. Those of us who are old enough and American enough remember that the outcome of that election came down to a handful of ballots in South Florida and a controversial Supreme Court decision that ultimately led to the election of President George W. Bush, but the vote count in Florida wouldn’t have mattered had Al Gore managed to win his home state of Tennessee. A victory in the Volunteer State would have secured Gore enough electoral votes to put him in the White House, but despite the fact that Bill Clinton won the state in both 1992 and 1996 with Gore as a running mate, Gore himself managed to lose there by less than 4% in 2000, the last time to date that a presidential vote count in Tennessee has had a vote margin in the single digits. The year 2000 was in the middle of the beginning of the Republican chokehold in the American South that has only recently begun to show signs of loosening. Tennessee and its neighbors were swinging away from Democrats like Al Gore, but I suspect that swing might have been hastened had the image of the Democratic Party in Tennessee not been tarnished by John Jay Hooker’s failed chicken business. Had Hooker been a more scrupulous and competent purveyor of greasy poultry pieces, he may have had a successful run for governor in 1970, and if his hypothetical competence in running a chicken business translated to running a state government, he may have preserved his party’s image in Tennessee just long enough for his fellow Democrat, Al Gore, to pull out a win there in 2000 and ultimately become the 43rd president.

Now, you might think I’m building up to a narrative about a visit to an operating Minnie Pearl’s Chicken, but the last holdout locations of that chain closed for good around the same time Al Gore was running for senate. Instead, I visited the last Yogi Bear’s Honey Fried Chicken, which is in no way related to anything I discussed above, other than the fact that it’s a product of the same era, when the fast food industry in general and the fried chicken business in particular were booming, an era when celebrity-endorsed restaurants were popular and gave us not only Minnie Pearl’s Chicken, but Arthur Treacher’s Fish and Chips, Roy Rogers restaurants, and Geoge Lindsey’s Family Steakhouse. (George Lindsey, of course, played Goober Pyle on the Andy Griffith Show. Goober, you might recall, took over the gas station in Mayberry from his cousin, Gomer when Gomer joined the Marines and a spinoff series documented the hilarity that ensued.)

While John Jay Hooker was attempting to emulate John Y. Brown Jr’s success in Tennessee, entrepreneur Eugene Broome was attempting to do the same in South Carolina, building a restaurant concept around his own proprietary honey-flavored chicken tenderizer. He initially reached out to Jackie Gleason to lend his name to the fledgling business, but settled for the Hanna-Barbera cartoon character Yogi Bear when Gleason declined. Broome however managed to retain Gleason’s catchphrase, “How sweet it is!” as a slogan, and Yogi Bear’s distinctive style of dress and mannerisms were partially based on Art Carney, Gleason’s co-star on The Honeymooners. (The Hanna-Barbera character, Fred Flintstone was based on Gleason, but Fred was presumably too busy shilling chewable vitamins and breakfast cereals to pick up a fried chicken gig as well.) Broome quickly accepted an offer from Hardee’s to buy the Yogi Bear’s Honey Fried Chicken brand, but slowing economy and mismanagement thwarted Hardee’s success with the Yogi Bear venture like a Jellystone Park ranger catching Yogi and his little buddy, Boo Boo in flagrante delicto with a load of stolen pic-a-nic baskets, and every Yogi Bear’s location but one had closed by 1980. 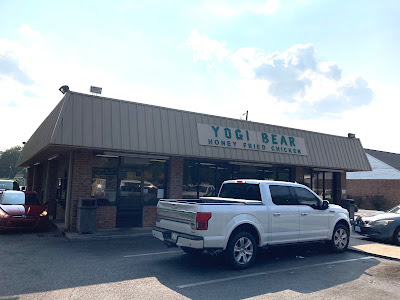 That single location, in Hartsville, SC remains open today, and I finally managed to cross it off my to-do list when I stopped by for lunch last month. It was well past the lunch rush when I stopped in, but there was still a decent sized crowd at the counter and in the dining room. After taking a minute to study the generic menu board prominently adorned with a modern Pepsi logo, I ordered a three-piece “Cindy Bear’s Dinner.” Cindy, you might recall, was the southern belle bear who served as an occasional love interest for Yogi in the cartoon series that fails the Bechdel Test miserably. My order number was called before I could fill my cup with Diet Pepsi. Apparently Yogi Bear doesn’t fry to order unlike the last couple of chicken places I’ve visited. I took my nicely printed box of food with no tray under it, and walked the curious floor made up of randomly shaped bits of tile, past various Yogi Bear posters and other bits of Yogi memorabilia to a booth in the narrow dining room off to one side of the counter.

I found the box stuffed with two mass-produced bread rolls, two disposable bowls containing my chosen sides, mac and cheese and coleslaw, and not quite three pieces of chicken. For the ten bucks and change I paid for the meal with sides and a drink, I also received a leg, thigh, and half a chicken breast, though in general, I suppose that’s preferable to a three piece meal made up of a leg, whole breast and wing, at least if you, like me, are a person of good taste who prefers dark meat. Despite coming from a warming tray or from under a heat lamp, the leg and thigh tasted fresh. The breading had a nice crispy snap when you bit into it, but surprisingly, I failed to notice any discernible honey flavor. Maybe Eugene Broome’s original recipe has been lost to time, or it never had an overwhelming honey flavor to begin with. In any event, the first two pieces of chicken were pleasantly juicy and flavorful without being greasy. The mac and cheese was functionally identical to the generally acceptable mac and cheese you can find at any KFC, and coleslaw was representative of what I later learned is a regional anomaly. Carolina coleslaw is chopped fine to the point that it looks pre-chewed. It somehow manages to be dryer than plain cabbage, and it has an overwhelming flavor of sage. It’s probably an acquired taste, but it’s a taste I wasn’t in town long enough to acquire. Any objection I had to the coleslaw, however, was quickly drowned out by the chicken breast half, which, while it had the same pleasantly crispy breading, was the single driest piece of poultry I had ever tasted. I realize I’ve previously outed myself as having a bias against white meat, but even among chicken breasts, hell, even among microwaved leftover Thanksgiving turkey this chicken breast half seemed especially dry as it absorbed all the moisture in the mouth as I struggled to chew and swallow it.

I returned to the counter to order a fried apple pie topped with soft serve to take my mind off of the driest chicken in the south. It was a little short on filling, but even plain fried dough topped with soft serve is a perfectly acceptable dessert. I must admit feeling vague disappointment when I left, not because of any major deficiency in the food or service, but I had high hopes of an immersive 1960s Hanna-Barbera themed experience, but aside from a neat vintage sign outside and a retro box full of chicken, there wasn’t much retro cartoon fun to be had. In a time before nuggets and tendies were widely available, it must have been tough to be a restaurant with a popular cartoon character for a mascot that only served bone-in chicken. Before the kids meal was invented by Burger Chef and perfected by McDonald’s, Yogi Bear’s Honey Fried Chicken only managed to have half the formula. Yogi was probably great at appealing to kids, who in turn, appealed to their parents and guardians to take them to Yogi Bear’s to eat, but the lack of kid-friendly food likely ensured there wouldn’t be much repeat business from families. Had Eugene Broome and/or the Hardee’s executives who wound up running the Yogi Bear’s brand had the foresight to beat McDonald’s to the nugget market, their story might have been different, but instead, like an entirely theoretical Johnny Cash, Yogi Bear tried to walk the nonexistent line between being a chicken restaurant for adults and a cartoon restaurant for kids, and fell into the a ring of fire and mixed metaphors where a waiting John Jay Hooker and Minnie Pearl bade them an enthusiastic “How-deee!” along with countless other failed fast food and political footnotes. In that way, I suspect the last Yogi Bear’s Honey Fried Chicken is what the brand always was, underwhelming, but the fact that it’s authentically underwhelming makes it a must stop for any fast food history buff willing to take a brief detour off I-95, whether they’re travelling from Grinder’s Switch to Jellystone Park or taking a tour of Southern governor’s mansions. Despite historic and current imperfections, it’s safe to say that Yogi is at least better at running a fried chicken joint than the average bear. 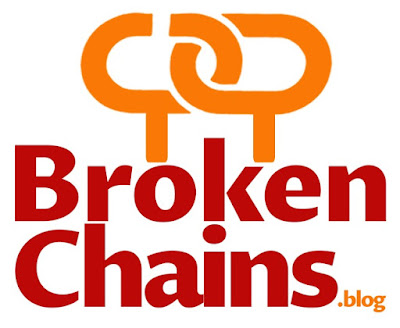