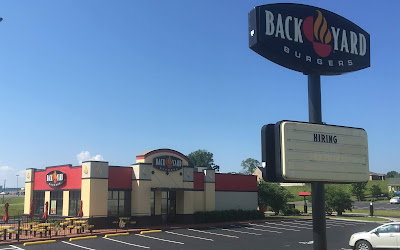 No portion of the American fast food landscape is as crowded as the burger segment, and it seems that regardless of how novel or superior of a product a chain offers, its cachet will always fall short of the iconic status enjoyed by chains represented by a clown, a king, and a girl with pitgtails. Meanwhile, Yum! Brands, the company spun off from PepsiCo's restaurant division in 1997, controls the remainder of fast food chains that enjoy icon status but don't serve burgers. Try as they might though, the owners of the KFC, Taco Bell, and Pizza Hut brands have never managed to make it into the burger game, and their attempts have left brands like Hot 'n Now and the American iteration of A&W reeling as Yum! proceeded to rapidly acquire, expand, and mismanage them before casting them aside to focus on their more successful and profitable brands. Seemingly, every burger brand Pepsico/Yum! touches seems to fall apart, and the same can be said for Back Yard Burgers, even though they had only the briefest of flings with Yum!

Like Hot 'n Now and Central Park, Back Yard Burgers was a product of the second wave, low overhead, drive thru only, burger fad of the 1980's. The first location was opened by the seemingly backward-named Lattimore Michael in Cleveland, Mississippi in 1987. The chain spread across the south, adding inside dining rooms along the way, and in the early 2000s, briefly had a deal with Yum! to operate co-branded locations with KFC, Taco Bell, and Pizza Hut. While the chain peaked at around 150 locations a decade ago, they quickly fell prey to the Yum! burger curse. A series of ownership changes and a boardroom brawl that precipitated a CEO's dismissal took Back Yard Burgers past the Cici's Point to Broken Chain status. Today, there are 45 Back Yard Burgers locations still in operation spread across nine states. Two thirds of those locations are in Missisippi and Tennessee, showing Back Yard Burgers has receded to its home market leaving only a few isolated stragglers behind as far away as North Carolina and Illinois.

Until a few weeks ago, I had never eaten at a Back Yard Burgers, though I had a vaguely positive opinion of them. My middle school years in Central Kentucky's Bluegrass region were marked by a debate that, from my perspective, was waged exclusively using passive-aggressive bumper stickers. It was during those years of the late 1990s that Lexington was expanding outward, most notably on its far east side where the grounds of the historic Hamburg Place Stud Farm had been sold to developers who were rapidly turning the area into Hamburg Pavilion, a sprawling shopping center that would permanently alter Lexington's retail landscape. Proponents of the new development and the economic prosperity it would bring plastered the posteriors of their vehicles with bumper stickers proclaiming "Growth is good!" While the vehicles of the opposition, enraged by the loss of a historic thoroughbred horse farm wore decals that countered with, "Growth destroys the Bluegrass forever." I didn't have much of an opinion on the matter at the time, but I did love the newly built Hamburg Pavilion when it opened. The new shopping center brought new and exciting brands with it. Hamburg Pavilion was the first place I ever saw a Meijer store and a Steak 'n Shake. The Regal Cinema at Hamburg was the first theater with stadium seating I ever visited. All of these places were immensely exciting for me to visit as an adolescent raised on McDonald's and Walmart. Hamburg was also home to Lexington's first Back Yard Burgers location, and while I never managed to eat there before it closed, my high regard for the brand was by virtue of that location's proximity to the shiny new businesses I found so exciting in my younger years.


Recently, I happened to be in Lexington visiting family and found myself with an afternoon free of familial obligations. I found myself traveling down US 27 toward Somerset, Kentucky home to one of Kentucky's three surviving Backyard Burgers locations to see if the brand could live up to the positive associations I had developed 80 miles north at Hamburg Pavilion. I'd had an early start that morning, and had been enjoying some other retail sites in town. As a result, I was ready for lunch when I walked into Back Yard Burgers a few minutes past their 10:30 AM open time. My initial impressions of the place were positive. Despite the brand's decline, the owners of the Somerset location seemed to have kept up the building well. The dining room felt clean, if not modern, and the parking lot had been repaved recently. After briefly surveying the menu board, I ordered up a 1/3 Bacon Cheddar Burger combo, and upgraded my side to garlic Parmesan waffle fries thanks to a helpful sign on the counter that advertised that option. As soon as I had selected a booth near the window that looked out on the bright yellow outside tables where a lone employee was raising each table's umbrella, my order was ready.


With its premium bun and single leaf of wilted romaine, the burger bore a stronger resemblance to something I'd encounter in a sit-down restaurant than in a fast food setting. The flavor lived up to the chain's name, as it tasted as if it had been cooked on a grill in a suburban back yard, and judging from the open propane grill in the kitchen, the flavor was genuine, but the more of it I ate, the more it reminded me of a Hardee's burger, which itself is still an above average product, but the lack of distinctiveness of the Back Yard Burger made for a slight let down. Regardless, it was still far superior to any allegedly flame-broiled item I've ever had at Burger King, whose hamburger patties I suspect are constructed of pressed animal trimmings, artificial beef flavor, and chemical flame broiling agents. The Parmesan garlic fries were decidedly heavy on Parmesan and light on garlic. The hearty waffle fries had been sprinkled liberally with Parmesan powder that I most often associate with shaking out of a green can onto a plate of spaghetti. The mounds of dry cheese powder on the fries overwhelmed any garlic flavor that may or may not have been added, and made the fries difficult to eat without aspirating cheese dust in the process.


I had noted another helpful sign on the order counter advertising blackberry and apple cobblers, and I couldn't resist the temptation of sampling such a unique and novel fast food dessert item. The employee with whom I placed my dessert order seemed genuinely surprised that I wanted to conduct a second transaction after ordering a burger and fries, but obliged my request for an order of the blackberry cobbler and a scoop of ice cream. She served the former out of a large warming tray of cobbler, placing a scoop of the runny pie into a small Styrofoam bowl. She then produced an identical bowl containing a single scoop of vanilla ice cream from a small freezer behind the counter before placing both items on a small tray and handing them to me. This presented a problem back at my table. Each bowl was too small to contain both ice cream and cobbler, and my attempt to transfer one to the other resulted in the cobbler bowl overflowing. I suppose the tray's main purpose in this instance was to contain cobbler runoff. It became more manageable to eat after the first few bites made room for more ice cream and made overflows less of an issue, but my desire to finish the dessert was not strong.


After a few years in the spotlight, expanding rapidly, Back Yard Burgers is soldering on as a broken chain both in the Mississippi River Delta and in a handful of far-flung outposts. Thanks to an above average burger and a well-maintained building in Somerset, Kentucky, my perception of the brand remains as it was when a Back Yard Burger was only an intangible idea projected into my brain at Hamburg Pavilion. I feel the same generally positive vibe but without excessive fervor or excitement for Back Yard Burgers having eaten there that I did when it was just a building that I'd pass on the way to Meijer. I'd gladly eat there again, but it doesn't elicit the same excitement I feel for other broken chains I've encountered and experienced for the first time.


That slight let-down compelled me to drive another 110 miles to Harlan, Kentucky, straight from Somerset, for a meal at my favorite Rax, which never disappoints. Speaking of, if you happen to be anywhere near the Harlan, Kentucky Rax on Friday November 29, 2019, you can join me in observance of the broken chain holiday of Raxgiving. There will be copious sandwiches, twisty fries, baked potatoes, and the signature Rax Endless Salad Bar. I'm working on some Raxgiving-exclusive giveaways too. You can find more details about the event here.