In gathering experiences to share here, I encounter a good many interesting phenomena that fit the Broken Chains theme, but for various reasons, do not warrant an entire dedicated blog post. One of my favorite podcasts is 99% Invisible, which explores the history and design of the unnoticed elements that shape modern society. The staff of that show run into similar problems when doing their research. Occasionally they find something interesting, but there's not enough to say about it to fill a full episode of their show. In order to share these smaller stories with their listeners, 99% Invisible does an annual "Mini Stories" episode at the end of every year, combining their smaller stories into a viable podcast episode. This post is shamelessly ripping off inspired by the 99% Invisible Mini Stories episodes, and represents my attempt to share my own mini stories tiny narratives. 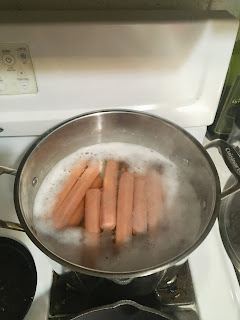 Following my trip to Ollie's Trolley earlier this year, I got curious about Lum's. Since there are no Lum's restaurants left open, I went online looking for a copycat recipe for their hot dogs steamed in beer. What I found exceeded my expectations. Ollieburger Spices USA is a website run by a former Lum's manager. For a reasonable price, you can purchase authentic Lum's recipes there along with the spice blends used to make Ollieburgers, special Ollie sauce, and the distinctively seasoned Ollie Fries.

I decided to use the recipes and spices I bought to host an informal dinner for me and ten of my closest friends. The Ollieburgers I cooked were very close to the ones at the Louisville Ollie's Trolley, and steaming hot dogs in beer is my new favorite way to prepare them. The food was a hit with my friends. It was nice to share a little real life Broken Chains experience with them. I even went on to host a taco night where I served copycat versions of Taco Tico's meat and refried beans a few months later. 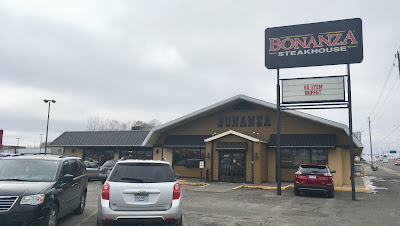 Until recently, my various adventures saw me in a hyperbolic function, constantly getting nearer to, but never reaching an operating original concept Bonanza Steakhouse. I visited four related Ponderosa Steakhouses one weekend this spring, and later dined at the only operating Bonanza Steak and BBQ, an attempted revamp of the original Bonanza concept. My plans to visit the Lincoln, Illinois Bonanza were thwarted when reports of a roach infestation scared me away, and sadly that location closed a few weeks later. At the time of this post, there are only eight original concept Bonanzas left operating in the continental United States, a mere fraction of Bonanza's one-time imitator and current sister brand Ponderosa, which is still hanging on with around 60 continental U.S. locations. (I say continental US because both Ponderosa and Bonanza are still hugely popular in Puerto Rico.)

I had to visit an OG Bonanza while I still could, so while on a trip to Minnesota that you'll hear more about in January, I stopped by the Bonanza in St. Cloud, which is still doing a booming business out of an old Bonanza barn-shaped building, not unlike my local Ponderosa which began life as a Bonanza. While I had a wonderful meal in delightfully outdated surroundings, the whole experience wasn't significantly dissimilar from dining at an especially well-run Ponderosa, a chain which I've already discussed at length. Still, if you're looking for buffet dining in the Gopher State, you could do a lot worse than the old Bonanza in St. Cloud. 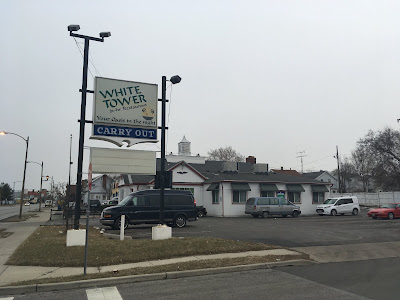 Fast food history is full of imitators. The roast beef boom started by Arby's in the late sixties gave us Rax, as well as countless other forgotten chains like Neba, Heap Big Beef, even Kentucky Beef, a KFC venture. McDonald's early success inspired Sandy's, Henry's Hamburgers, Burger Chef, and Mr. Quick. Even my beloved G.D. Ritzy's shares more than a few similarities with Steak and Shake. Much of American Fast food history can trace its lineage to the original hamburger chain, White Castle which had plenty of imitators of its own, a few of which survive today. White Tower was one of many restaurant chains that sprang up in the 1920s and 1930s seeking to emulate the White Castle model. Royal Castle and Krystal are also examples of White Castle imitators. The folks at White Castle generally tolerated the knockoff chains unless they attempted to expand into existing White Castle territory, which is exactly what White Tower did, resulting in a lawsuit by White Castle, which dragged on for years. The eventual result was that White Tower had to change their building designs and pay royalty fees to White Castle. The chain fell apart in the 1970s, and today there's a single White Tower left open, located in Toledo Ohio. I had lunch there early this year with Bo-Luke Coyvance of Uncle John's Pancake House fame, and found essentially no resemblance to White Castle or the original White Tower concept.


Rather than a fast food format, it was a full-service restaurant with printed menus and servers waiting tables. The menu was several pages long offering a selection of sandwiches and breakfast foods. I expected the burgers to bear some resemblance to those at White Castle, but found them to be full-sized, round, and completely devoid of caramelized onions. Any ties to the original White Tower chain were gone. A former White Tower in Hamtramck, Michigan operated as Campau Tower for many years before closing. I ate there once on a blind date around 2010, and found the burgers to be authentically small and oniony, if not square. I can't help but think this was the last real White Tower. The last time I was there, they still had the old Campau Tower sign up, with the Tower part being from the original White Tower sign, but these days they sell street tacos, and a second sign in the window reads "Dos Locos Tacos."


I've always meant to cover more retail stores here, but broken chain restaurants are easier to find, and I generally have more to say about them. I've struggled to find retail stores that I'm inspired to write about. Radio Shack, an offshoot of the Tandy corporation, fits the Broken Chains theme nicely. Once a fixture of every mall, most Radio Shack locations closed at the time of the company's bankruptcy in 2015, but a handful of franchised locations remained open, the unlikely survivors of an extinction level event. I encountered one such location in Campbellsville, Kentucky, directly across the street from the last operating Druther's restaurant. I stopped by to check it out after a hearty breakfast at Druther's and found it to be operating both as a Radio Shack and an independent carpet store. The sole employee excused himself from a conversation with another customer shopping for carpet to ask if he could help me. Not looking for anything in particular, and slightly flustered, I asked if he had a car charger for my iPhone. (I didn't need one, but it was the first thing that came to mind that a Radio Shack would be likely to have.) It turned out they didn't have any iPhone car chargers in stock. Without any reason to linger in the store further, I thanked the employee for his time. He returned to his carpet customers and I left, taking a couple surreptitious pictures on my way out. 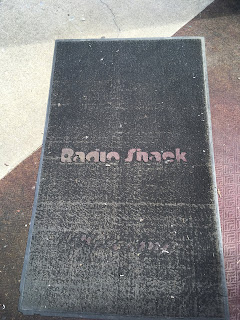 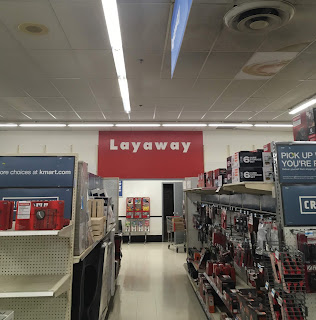 Just as I perceived Taco Tico and Taco Bell as equals during my early 1990s childhood in Central Kentucky, I saw Walmart and Kmart in much the same way. At the time, Kmart was the undisputed champion of discount stores, and Walmart was still the young up and comer from small-town Arkansas. Each chain had a store at opposite ends of Nicholasville, Kentucky which were roughly the same size, each offering a store full of clothing and homegoods with a few token grocery aisles. I'd get dragged to both stores on the regular as a kid. As the '90s progressed, however, Walmart's presence grew with larger and more numerous stores opening seemingly at every major intersection in and around Lexington, while the aging Kmart stores, most of which were 1970s builds, closed one by one. The Nicholasville Kmart closed its doors right around the time Walmart started building its new Supercenter across town, which remains open today. The Kmart has since been demolished and replaced by a Kroger.

When I moved to Billings, Montana in 2012, I rediscovered Kmart, preferring to shop at the never-crowded, heavily dated Kmart in town rather than the more modern and popular local Walmart and Target locations. The old Billings Kmart was just as I remembered the Kmart in Nicholasville from two decades earlier. I was a regular there until its closure in 2014 or so. The distinct lack of updates in most of their stores is what attracts me to Kmart. With no budget to modernize stores, most Kmart locations feel exactly as they did 20 or 30 years ago. It's that time capsule feeling that keeps me seeking out Kmarts that are still open for business. 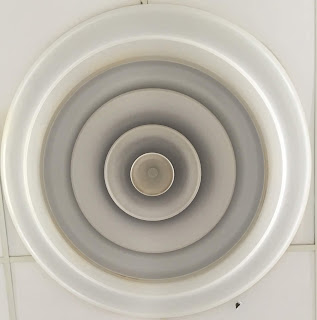 Operating Kmart locations are increasingly rare specimens, and may soon be extinct. Kmart was bought out of bankruptcy in 2003 by ESL investments, a hedge fund controlled by Eddie Lampert, who became the de facto CEO of Kmart. Not long after Lampert also acquired Sears and merged the two brands, and generally proceeded to mismanage them, resulting in massive financial losses. Lampert has been trying to recoup these losses for a decade or so by selling off company assets little by little, effectively very slowly liquidating the company. Each new financial hardship has brought about a new wave of store closures. Sears Holdings, the company that controls both Sears and Kmart, declared bankruptcy in October.

Prior to Lampert's takeover, the Kmart corporation, a descendant of the old S.S. Kresge department store chain, was based in Detroit. In fact, the very first Kmart, which opened in 1962 and closed in 2017, is located not far from my metro Detroit home. As a result, Kmart had a significant presence in and around Detroit well into the Lampert era. These days, there are more empty Kmart buildings around than operating ones. With the long term survival of the Kmart and Sears brands as we know them looking increasingly unlikely, I've spent the last few months visiting as many Kmarts as I can, mostly in Michigan, but a few elsewhere as I encounter them. While Sears isn't as close to my heart as Kmart is, I've visited a few of their stores too.  I don't have much to say about the decline of Kmart and Sears that the mainstream press isn't already saying, but I have shopped at, and taken a lot of pictures of their surviving stores this year. I'll close by sharing a few of my Sears/Kmart pictures.

Thanks everyone for your readership and suggestions. This silly blog project of mine has led me to having a solid year of adventures in 2018. I'm looking forward to another year of Broken Chains, and I'm excited to see where 2019 will take me. Wherever I end up, I'll be sure to tell you all about it here.
Posted by Zap Actionsdower at 8:25 AM