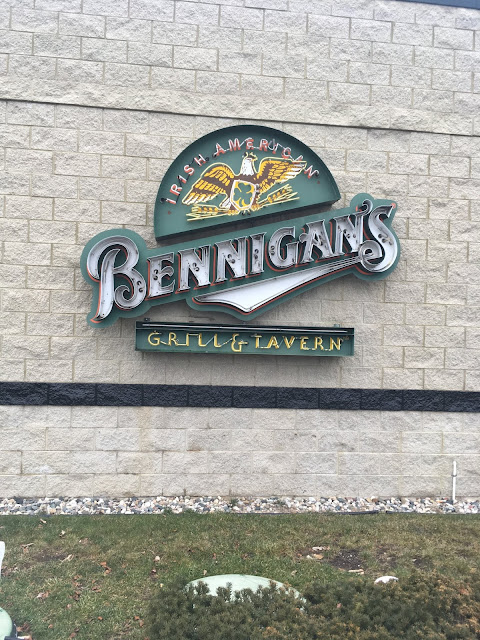 For my entire life, I've always been content to be by myself. As a child, I didn't much care for other kids. I found them to be immature. At the same time, as a child, I found adults to be overly condescending. My mother used to pay me by the hour to motivate me to socialize during play dates. I've become slightly more social as I've aged. These days, I have a small group of close friends that I try to see at least quarterly. I find great fulfillment in my romantic relationship with Esmeralda Fitzmonster, and it's great when she can come on adventures with me. Unfortunately, our work schedules frequently result in one of us working while the other is not, meaning I'm often on the road alone visiting the endangered businesses that inexplicably intrigue me. This isn't a big deal to me. While I enjoy Esmeralda's company, I also enjoy my own. Most of the restaurants I visit are glad and able to accommodate a lone diner, but I recently visited three locations of a broken chain that doesn't seem to know what to do with a party of one.

Bennigan's and its vaguely Irish theme were developed by Norman E. Brinker, who, at the time was an vice president at Pillsbury following their acquisition of Steak and Ale in 1976. Brinker had founded the Steak and Ale chain a decade earlier, and would go on to acquire and expand the Chili's brand, as well as the ill-fated Spageddie's chain after leaving Pillsbury. 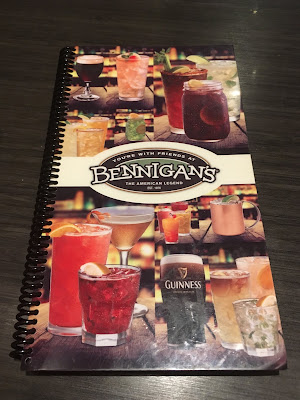 In the late '80s/early '90s both the Bennigan's and Steak and Ale chains were acquired by Metromedia, then parent company of the Ponderosa/Bonanza chain. The recession of 2008 was not kind to the Metromedia brands. Their bankruptcy forced the closure of all Steak and Ale locations, and 150 corporate-owned Bennigan's locations. The remaining 138 franchised Bennigan's slowly closed over the years, making the brand increasingly scarce. Today, there are 15 Bennigan's locaitons open in the U.S, plus a bakers dozen more in Latin America and the Middle East. As luck would have it, three of the 15 surviving American Bennigan's are in my home state of Michigan, and when I hear of a broken chain open for business within a (semi) reasonable driving distance I can't stay away, especially when it's a brand I for which I have a preexisting affinity.


I first moved to Michigan in 2008, just as Bennigan's locations were closing en masse, but a few nearby franchised locations remained open. I'd often take a drive to Ann Arbor for lunch or dinner at the Bennigan's near Briarwood Mall, and more often than not, I'd order the Monte Cristo sandwich. Depending on where you order it, the Monte Cristo may be served on French Toast, battered and deep fried, or both. It may be served with raspberry jam or maple syrup. It almost always contains ham and cheese, and may also have turkey. Regardless, it's a rare combination of savory and sweet that works perfectly when well executed. Bennigan's interpretation of the Monte Cristo is deep fried with ham, turkey, and cheese, and comes with raspberry jam. It's long been my favorite version of the Monte Cristo, the calorie-laden offspring of a sandwich and a doughnut. Of course, nearly as soon as I discovered Benngan's and their Monte Cristo, the locations near me all closed. My go-to location at Briarwood Mall is a Red Robin now.

It had been a solid eight years since I had eaten at Bennigan's when I discovered a cluster of them open for business a couple hours north of me, in the metacarpophalangeal joints of my palmated home state. I decided to visit all three of them, stopping by each location on a different day, to see how Bennigan's is getting on post-bankruptcy under their new corporate parent, Legendary Restaurant Brands, LLC. Longtime Broken Chains readers know what's coming next. 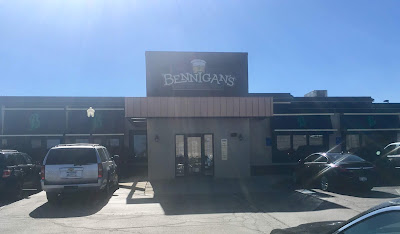 It had been nearly ten years since I had been to a Bennigan's when I found my way to this one in Saginaw, but the entryway at the apex of the V-shaped dining room surrounding an elevated bar area immediately felt familiar. It was nearly identical to the layout of the old Ann Arbor Bennigan's. When I told the hostess I'd be dining alone, I could see her take a minute to attempt to process that information, as if her brain was a laptop from 2005 with too many browser tabs open. My penance for coming to this Bennigan's by myself was being seated at the rearmost booth on the right side of the dining room, where the building's outer wall and the wall separating the dining room from the corridor to the restrooms form a tight acute angle. The booth was situated in the tight gap between these walls, and as if that wasn't enough of a claustrophobia trigger, a large television hung from the ceiling immediately over my head.


My server stood in contrast to my sub-par table under the Samsung flatscreen of Damocles. She was pleasant and attentive without being overbearing, and had no problem substituting broccoli for fries as the side for my sandwich. (I had already eaten at Maryland Fried Chicken that day, and was quickly growing weary of fried foods, a condition from which I have since recovered.) My meal came out quickly, and my sandwich was just as I remembered it, golden brown, dusted with powdered sugar, and cut into four pieces. I smeared on some jam, and took my first bite, then another and another until the sandwich, and broccoli were gone. Something wasn't right. Somehow my deep-fried sandwich tasted dense, greasy, and generally unpleasant and left me feeling nauseated and lethargic. Maybe the broccoli was the wrong pairing, maybe it was the fried chicken I'd had earlier in the day, or maybe it's because I'm not 22 anymore, but the Monte Cristo magic was gone. I decided then and there that I was done eating Monte Cristos for the foreseeable future, and that I'd use my remaining visits to explore the rest of the Bennigan's menu.


This location seemed to be in the middle of an exterior refresh while I was there, as outer panels all over the building had been stripped away to reveal gypsum insulation panels, which sat exposed waiting to be covered by some decorative trim. A couple windows at the rear of the building had been hastily covered with particle board, as if a construction mishap caused their breakage. It's business as usual inside, though. Here, my penalty for dining alone was being seated at the bar, at the not so gentle suggestion of the hostess. I rarely drink alcohol, and abstain when I'm driving multiple hours by myself as I was on this trip. I'm also not a fan of high-top tables, which, is of course where I ended up. My perch made it difficult to scoot my chair without feeling as if I was about to tip over. I could barely handle it sober. I shudder to think about sitting at a high top table after a couple of drinks. Despite my precarious chair, I'm comforted by the small hexagonal tiles covering the floor. They are the same style of tiles that covered the floor at my dearly departed Ann Arbor Bennigan's. Additionally, I was inadvertently conditioned to have positive associations with hexagonal tile from an early age. The G.D. Ritzy's locations of my early childhood, as well as the corridor that led into the Lexington, Kentucky Children's Museum also had the same small six-sided tiles. I knew that whenever I saw that style of floor covering, a fun time was about to happen. I was a weird kid.

Like an Ollieburger, the marinade seems to be what makes the Kensington Club unique. It's base is a thick cut sirloin steak of decent quality, not unlike what you could get at any steakhouse, but the blend of sweet, tangy, and salty flavors imparted by the marinade make it a steak experience that makes it stand out a bit. The default sides on the other hand were lacking. For an allegedly-Irish inspired restaurant chain, this Bennigan's seemed to have trouble with potatoes. While the mashed potatoes were made from scratch, and not flakes, they were inexplicably both overly runny and dense. Likewise, the Brussels sprouts had been doused with so much sugar and butter they resembled a dessert more than a vegetable, which is to say they were pretty good, but they barely qualified as Brussels sprouts. 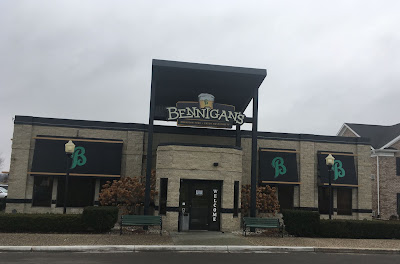 I was overjoyed and then immediately disappointed when I was seated at a real table in the center of the dining room at this Bennigan's, but quickly realized that my server was also taking care of two large groups, each consisting of eight to ten people each seated near me. He was already overwhelmed before I got there, so I resigned myself to receiving poor service. Once he had time to direct his attention toward me, my server took my order, brought my drink, and disappeared. He returned 15 minutes later with several bowls of potato soup on his tray which he distributed among the larger groups. When he tried to give me a bowl, I reminded him that I had ordered French onion, he removed the offending soup from my table, and disappeared again. Just as I was regretting not accepting the potato soup, a second server returned with a second bowl of potato soup, which he sat before me. My regret vanished as I explained, more exasperated this time, that I had ordered French onion soup, and that this was the second time someone had tried to bring me potato. He sheepishly apologized and vanished. My original server returned immediately after, miraculously carrying my salad and correct soup, which he apologetically set on my table.

The salad was the typical mixture of nondescript greens, nuts, apple slices, and bleu cheese crumbles topped with a grilled chicken breast. It's fine, nothing spectacular, on par with what you'd get at Panera or make at home if you happened to have the ingredients on hand. Under the cheesy top, the French onion soup is mostly broth with only a couple token onion pieces and chunks of soggy, bread. When the bill comes, this simple, light meal somehow costs $20 before a tip. I paid, tipping more than I should have for the level of service I received, and concluding that Bennigan's doesn't know what to do with people like me who are content to dine alone.


Every Bennigan's I visited was full of groups of people. Often large groups of families, friends gathered to watch sports, or elderly women in large red hats. All seemed to be enjoying each other's company, and more often than not, were drinking. As a nondrinking loner, I can't help but think I'm not in their target demographic, and that I would have been given better seating if I were in a larger group. Likewise the promise of a larger tip that a big group brings would have gotten me better service. A few beers would have made me care less about the inflated prices. I also can't think of anything that would be better drunk food than a nice greasy Bennigan's Monte Cristo. It's something that most people, myself not included, wouldn't dream of eating sober, but would start to sound increasingly palatable with increasing levels of inebriation. As for me, I won't be back to Bennigan's alone, but I would consider a meal there with Esmeralda, or in conjunction with my quarterly close friend gathering, preferably with a designated driver.