Following my lunch at the Bay City Ponderosa, I made a stop or two you may hear about later on in future updates, after which I pulled into the West Branch, Michigan Ponderosa for dinner. This is the only purpose-built Ponderosa I visited on this trip, likely built in the '80s. The building had the typical architecture of the time, still in decent shape with minimal updates. It still even had the green sign with the old Ponderosa logo. This was my favorite building, but least favorite dining experience. Let's get into it, shall we? 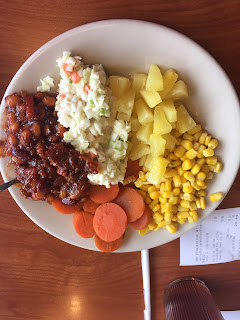 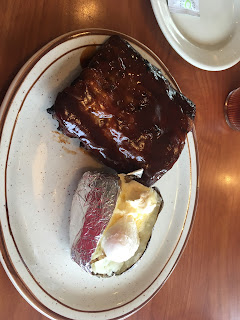 The menu board at this location is screwy. It won't tell you how much any entree costs, only how much more it costs than just getting the regular buffet. Somehow, I end up paying over $20 for the meal you see above. It's 5:30 on a Saturday evening, and the restaurant is about half full, and the buffet is messy and not well stocked. At least half of the trays are almost or completely empty. There were no rolls out from the time I walked in until just before I left. There were a lot of families with unattended kids here. Children are the scourge of buffets. They're too short for sneeze guards to be effective, and they don't understand basic sanitation or germ theory. I witnessed a young girl wearing a very frilly pink dress use her bare hands pick up a peanut butter cookie off the very sparsely stocked dessert table, only to take a bite and put it back where she found it. I took it upon myself to remove the offending cookie. The ribs were decent, but not stellar.

The only real highlight of this meal were the baked beans I got from the buffet. They contained at least four kinds of beans in a sauce that was simultaneously sweet, tangy, smoky and spicy. There were chunks of bacon and pineapple mixed in there too. I may try to replicate them at home sometime. Beans and architecture aside, I don't have many positive things to say about the West Branch Ponderosa. It's a shame that such a beautiful example of 1980s retail architecture is so poorly run.

From West Branch, I drove on to Mt. Pleasant, and spent the night. In the morning, I made my way to the local Ponderosa, which is one of the locations that offers breakfast. I had learned my lesson from the day before, and was the first customer in the door after they had opened. Plus, it was Mother's Day and I was trying to beat the brunch crowd. The Mt. Pleasant Ponderosa is a converted Golden Corral. Aside from signage, and the same buffet tables made to look like antique stoves, it feels like a Golden Corral.  I doubt the regulars here even noticed the change. The food is indistinguishable from Golden Corral's breakfast buffet food, with the exception of the strawberry biscuits. They're typical biscuits with the centers scooped out and filled with strawberry pie filling and topped with warm icing. They're my new favorite thing, and are on my list along with the beans from West Branch to try to recreate at home. Aside from that the food is unremarkable, the scrambled eggs are overcooked and on par with the eggs you might find at a Comfort Inn's continental breakfast, but there's also an omelette station with a cook preparing omelettes to order, so I can't complain too much about the eggs from the buffet, but it's all pretty generic.

So what kind of shape is the Ponderosa-Bonanza brand in? If the four locations I ate at are any indication, the brand as a whole is in disarray. The food, buildings, staff, prices, and overall experience at four Ponderosas relatively nearby to each other were wildly inconsistent. There were a few standout food items that I only encountered at one location or another that would have really enhanced my experience if they were available at every location. Most everything else feels bland and generic, food you could get anywhere, and often for a better price elsewhere. The steak and ribs I had were of acceptable quality and would be worth the cost, but with the exception of the impeccably run Bay City Ponderosa, the rest of the experience falls short. It seems Ponderosa is trying to be both a family friendly buffet like Golden Corral and a mid-tier steakhouse like Longhorn at the same time, and isn't doing either particularly well. FAT Brands should pick one of the above concepts and commit to it, or perhaps, make an effort to go upmarket. That's what I'd do if I were in charge.

With the hundreds of millions of theoretical dollars I've amassed with my imaginary Nickerson Farms revival, I'd acquire Ponderosa-Bonanza from FAT Brands, and immediately close or renovate any locations not operating out of original buildings. I'd revert to a logo closer to the old green and white sign with the ponderosa pine tree outline in the A. I'd stop trying to compete with the low end buffets and steakhouses, and focus on offering a premium product at a price competitive with high end casino buffets, maybe eventually using the Ponderosa name for new high end restaurants. For the other end of the market, the Bonanza name for something closer to the existing concept, but with emphasis removed from either the ordered items or buffet. New standalone locations would be built in a modern style with nods to both the '80s style buildings and the earlier ones with the western general store look.

My silly fantasy plan will probably cost much more than FAT Brands is willing to spend, and involve too much risk. Also, it's something I came up with after thinking for about 30 seconds, and therefore not a viable business plan. I imagine they'll either try to make Ponderosa-Bonanza more of a Golden Corral competitor or keep it as it is let it shamble on into obscurity as locations slowly close their doors. In the meantime, if you happen to be near a well run Ponderosa or Bonanza like the one I encountered in Bay City, enjoy it while you still can.

Posted by Zap Actionsdower at 8:04 PM

Email ThisBlogThis!Share to TwitterShare to FacebookShare to Pinterest
Labels: Bonanza, Michigan, Not Fooling Anybody, Ponderosa