Riding Fences at the Ponderosa Part 2: The Legend of Bill Knapp's Bonanza


While planning out my Ponderosa trip, it occurred to me that I hadn't eaten anything other than the mediocre buffet food at my local Bonanza turned Ponderosa. A couple days before I hit the road, I stopped by and ordered up a steak at the order counter. I'm going to try and list every item I order, as I did with G.D. Ritzy's, only slightly ripping off tesg's lunchtime social in the process.

When you order a meal without ordering the buffet at a Ponderosa, your meal comes with a side salad served to you at the table. After ordering I sat down and watched with equal parts 'musements A and B as my waitress prepared my salad using ingredients from the salad bar. It's better than her pulling a pre made salad out of the fridge I guess. 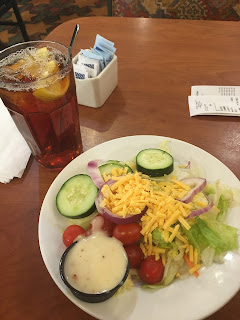 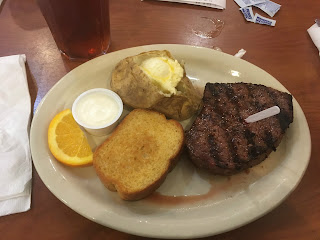 I generally order steak medium rare, but fearing I would get a low grade, enzyme-tenderized pseudosteak, like I've encountered in the past at Chili's and Texas Roadhouse, I ordered it medium. I was pleasantly surprised when my steak arrived and it was perfectly decent. It didn't have the telltale fall-apart zombie meat texture that cheap artificially tender steaks tend to have, nor should it for the $18 and change this meal set me back. It wasn't the best steak I've ever had, but it was far from the worst. I enjoyed it much more than anything I've ever had from the buffet here. I should have ordered it medium rare. As I mentioned previously, the interior of this place is in sad shape, but they do always have good music playing, mostly hits from the seventies. It's a bit like having a bootleg Guardians of the Galaxy soundtrack playing as you eat. 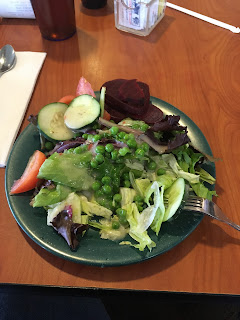 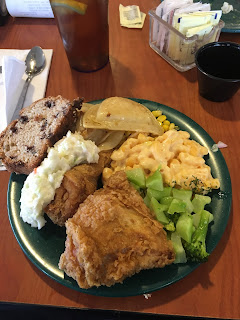 My trip began in earnest with a run up to Bay City, just a couple of exits north of the old Howard Johnson’s I’ve covered previously. The Bay City Ponderosa operates out of a converted Bill Knapp’s. (There are no Bill Knapp’s left in operation, but some grocery stores in the Great Lakes region carry Bill Knapp’s branded baked goods). It's 11:00 AM and they've just opened for business. The lunch buffet is a couple dollars more here than it is at home, but it's also more impressive. This Ponderosa has fried chicken on the buffet whereas the one local to me only has wings. Plus there's some really good perogies. There's also a larger salad bar, and a better dessert selection. The building feels bright, and modern compared to the nearly windowless converted 70's era Bonanza my local Ponderosa operates out of. Having just opened for the day, the buffet food is well stocked, and fresh. It all tastes great. I watch an elderly couple navigate the buffet as I eat.

"Where's the plates?" the old woman asks no one in particular, far too loudly.

A nearby waitress hands her a plate from the stack the old woman was standing right next to only to have her exclaim, "I'm visually impaired!" as thanks upon receipt of the plate. She begins inspecting the salad bar offerings when her husband shuffles up and interjects, "Joyce, they've got pecan pie for dessert!" even louder than his wife. This is good news. I hadn't checked out the desserts yet, and I like pecan pie. The only reply I heard from Joyce was, "Where the heck is the lettuce?" as she was standing next to the salad bar.

The pecan pie is straight off the Sysco truck, with very few pecans and a gooey filling, but it's not bad. My Southern upbringing has made me a pecan pie snob. Overall, I was thoroughly impressed with the staff, food and service at this location. Unlike my local Ponderosa which overcooks everything, the vast majority of the buffet food here is well-prepared. Plus the other customers are entertaining. I could see myself stopping here again for a meal the next time I'm running up I-75 from Detroit.


Posted by Zap Actionsdower at 6:33 PM