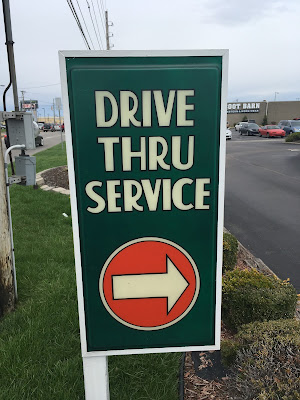 My younger brother was born just as the Ritzy's near us were closing up shop for good. As a result, he had no recollection of ever eating there. I doubt he ever had. Thankfully, he had business in Evansville that involved the acquisition of a new-to-him '91 Ford Festiva, and we were able to meet for lunch at the one Evansville G.D. Ritzy's I had not yet visited. Today's lunch at G.D. Ritzy's with my brother, his partner, and a couple of Festivas was one of my favorite meals in recent history. Afterward, my brother headed home in his new Festiva, and I headed to Owensboro, Kentucky to eat at two more Ritzy's. My lunch guests both thoroughly enjoyed their first G.D. Ritzy's experience. The Festivas, I hope, didn't leak too much oil in the parking lot. All three Evansville stores are beautifully run and thriving. They've really taken the concept and run with it.

This particular G.D. Ritzy's has an extra large dining room, with a curved window at its curved corner. The building has definitely always been a Ritzy's though. Its interior, like the other two Evansville locations is an impeccably maintained time capsule. We're here at high noon on Saturday, and It's busy. People are lined up to the door. Still, the service is quick, the staff is friendly, and the food is fresh and delicious. When I go up to the counter to order ice cream, the cashier compliments the two Festivas we had driven over.

The Owensboro Ritzy's, are just called Ritzy's, as many of the later locations were. The building and signage have a different color scheme and different interior, but the basic building design is the same as the two Evansville locations I visited on the previous day. A couple sources I've spoken to have said the Owensboro Ritzy's were among the last to open prior to widespread closures in the early '90s. The building feels like an attempt to improve the original design. The dining area is not elevated. The floor tiles are square and are arranged in a black and white checkerboard pattern. There are no teardrop speakers on the walls. Menu boards have been updated, and there's a self-service drink station, unlike the Evansville restaurants. None of this is inherently bad, but the childhood nostalgia vibes aren't as strong here. I don't bother taking many pictures, though seeing a second-generation Ritzy's is interesting. The food is identical to that of the Evansville locations, and prepared just as well. This location has baked potatoes on the menu. Unlike in Evansville, the staff is wearing Ritzy's-branded apparel, but no old-timey soda jerk paper hats.

I'm feeling the two lunches I've had in the past two hours, and a PB&J and some ice cream is all I have room for. This location has none of the signature Ritzy's architectural touches, other than the three sided sign out front. I suspect it was originally something else. It has the same owner as the other Ritzy's across town, and the menu and decor are identical. The PB&J here tastes even better than the one I had in Evansville. I've eaten a lot of Ritzy's ice cream in the past couple of days, and it's all been great. This vanilla may be my favorite though. I'm not sure what that says about my personality, but Ritzy's definitely makes a good, clean-tasting vanilla.

I went back to the Green River Road Ritzy's for a late dinner, mainly because I knew I'd be hungry at midnight if I didn't eat something at 8 PM. Plus I wanted to try the Banana Supreme ice cream. It has ribbons of dulce de leche and bits of sponge cake in it. It reminds me of eating a banana Twinkie in a good way. It's even better than the vanilla. Ritzy's shoestring fries are my favorite fries, but I'd had them twice today, so I went with steamed vegetables, an option G.D. Ritzy's has offered since the eighties, as my side. It was a good decision. I wish more fast food joints had a steamed vegetable side dish option.


Posted by Zap Actionsdower at 9:27 PM