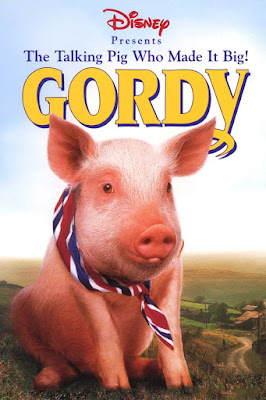 During the spring and summer of 1995, two live action movies starring talking pigs were released to American theaters. There’s the one you probably remember, Babe, which is rated at 97% fresh on Rotten Tomatoes and is generally regarded as a modern classic, and the one I saw as a nine year old, Gordy.

Gordy was initially written in the early 1970s to be a spinoff of the show, Green Acres, focusing on Arnold Ziffel, a character from the live action sitcom who also happened to be a pig. Gordy was written and eventually redeveloped into a standalone film by former Green Acres writers Jay Sommers and Dick Chevillat, but by the time the film had been produced and made it to theaters nearly a quarter century later, both Sommers and Chevillat were long dead. Thanks perhaps to its script’s ancient origins, the film was panned by critics and was a box office flop. In contrast to the beloved talking pig film, Babe, Gordy has a 26% rating on Rotten Tomatoes, and few who did not see it in the spring of ‘95 remember it today.


My fuzzy childhood memories of seeing Gordy in the sticky-floored auditorium of my local hot pink and neon green-accented Cinemark theater were on my mind as on the long drive home from Wichita as I was nursing a wicked case of indigestion from eating too many tacos. I had spent the previous two days sampling Wichita-style tacos, which the late, great Evil Sam Graham dubbed Wichitacos. The best known Wichitacos, of course, come from my beloved Taco Tico, which was founded by Dan Foley in Wichita in 1962, and I made sure to stop by a couple Taco Ticos while I was in the area, in part, to appreciate their architectural resemblance to the Taco Tico locations I grew up with in Kentucky, but also to ensure Taco Tico in its birthplace tasted like it did in Kentucky and Louisiana, and not like the strangely bland Taco Tico food I encountered in Iowa. Thankfully in Wichita, Taco Tico’s meat blend tasted identical to the taco meat I had already declared definitive last spring. With that out of the way, I was free to sample a few other Wichitacos.

I also visited one of Wichita’s two Taco Pronto locations and found that just as at Taco Tico, both tacos, and Sanchos, that’s a burrito shell stuffed with taco fixins, were on the menu. I took this, and the similar name to as indications that Taco Pronto was both a purveyor of Wichitacos and a Taco Tico imitator. I found the food similar to Taco Tico, but not remarkably so. The main attraction at Taco Pronto is the ice, which is of the shaved variety and produced by some ancient machine behind the order counter. After I ordered, I asked the cashier to fill my cup full of ice so I could take it to the drink fountain and use it to craft a Dr. Pepper snow cone. While the food was anything but unique, the beverage made for a memorable encounter.


I found a more memorable experience up the road at Taco Grande, another local chain known for Wichitacos that shares its name with a "Weird Al" Yankovic song from 1992 that hasn’t held up any better than “Rico Suave,” the song on which it was based. I found my way to one of two Wichita locations, which was housed in a small strip mall. (The other Wichita Taco Grande is in a freestanding building.) I walked in to find a menu board that looked much older than the building and decor around it and an overwhelming smell that reminded me of the imitation butter topping that movie theater concession stands dump on popcorn. Only slightly put off by the odd smell, I ordered a sancho and a crunchy taco, my third sancho and taco of the day for anyone at home keeping count. They were ready not long after I had paid, so after filling my cup with unremarkable ice and Coke Zero, I took them to my table.

Alternating bites of the taco and sancho were equally surreal. The meat filling had a taste that was not dissimilar from what I’ve become accustomed to after decades of eating at Taco Tico, but it was much sweeter, almost to the point of ridiculousness. It was as if someone had attempted to take typical fast food taco ingredients and turn them into a curious meat-based dessert by dumping sugar into the meat mixture. I’m being slightly generous referring to the brown filling at Taco Grande as meat, because its mouthfeel was as unnerving as its taste. Taco Tico famously, or infamously, uses fillers to stretch its taco meat, and those fillers give the meat a smooth, moldable consistency. Taco Tico copycat recipes call for small amounts of both textured vegetable protein and instant oats to round out the beefy base. Taco Grande’s meat seems to have a dramatically higher amount of fillers compared to its more successful crosstown rival. A mouthful of a Taco Grande taco or sancho yields curious bits of non-meat in your mouth that almost feel… fuzzy, like cracker crumbs that stay dry no matter how thoroughly they are masticated. A combination of the odd taste, texture, and general fullness prevented me from finishing my Taco Grande meal, but I wasn’t so full that I didn’t stop by the Braum’s down the street for some ice cream to clean the taste of Taco Grande out of my mouth.

I thought that this was the end of the story until I arrived home and began researching Taco Grande. What I had assumed was a local imitator of the more successful Taco Tico was actually the original Wichitaco chain and a broken chain in its own right. In fact, Taco Grande was founded by Mike Foley, cousin to Taco Tico founder Dan Foley. Mike Foley had spent time in Southern California, and had become fascinated by tacos and the vendors that sold them. When he returned to his native Wichita, he opened the first Taco Grande, which became Wichita's first taco place. That was 1960. His cousin, Dan Foley, opened the first Taco Tico in 1962, likely inspired by his cousin Mike’s success with Taco Grande, making Taco Tico the imitator of Taco Grande, not the other way around.


There are about five Taco Grandes open today, spread between Wichita, Abeline, Concordia and Hays, Kansas, and near as I can tell they all seem to be operating independently. I’ve found references to as many as 13 Wichita-area locations, and indications the brand once had a presence that spread far wider than the state of Kansas before shrinking down to a broken chain composed of a handful of independently owned and operated restaurants, a chain that is even more broken than the broken but recovering Taco Tico.


My impressions are of course, subjective. In context, Taco Grande might have more appeal to locals than it did to me, an interloper exploring the Wichita fast food taco trail. If it were 1960, and if I were a native Wichitan who had never eaten, or even heard of a taco before, I might find Taco Grande’s unique texture and taste to be exotic and appealing in its distinctiveness. Likewise, had I grown up in Wichita, eating at Taco Grande regularly, I might prefer it to other fast food tacos. After all, that’s probably why I enjoy Taco Tico so much. Compared to Taco Bell, Del Taco, and Taco John’s, Taco Tico’s product stands out nearly as much as Taco Grande’s does, and my own childhood nostalgia probably does more than a little bit to improve the flavor of my Taco Tico sancho.

Back in the world of talking pig movies, Gordy beat Babe to market, debuting in mid-May, just as schools full of kids hungry for wholesome summer entertainment were letting out. Babe wouldn’t hit screens until three months later, during back to school season, but being first to market wasn’t enough to for Gordy to be more successful critically or financially. Whether it was better marketing, or just because it was a superior movie, Babe emerged the victor of the talking pig movie wars of 1995, and I can’t help but feel like in the Wichita fast food taco wars of the early 1960s, a conflict that literally pitted cousin against cousin, Taco Tico, the latecomer, was Babe to Taco Grande's Gordy. Like Babe, Taco Tico offered and continues to offer greater appeal to a wider swath of a modern audience, and is well regarded by those even vaguely familiar with it. Gordy, and Taco Grande no doubt have their fans, but not to the extent of Taco Tico. Though similar to their respective competitors, both Gordy and Taco Grande miss the mark and seem doomed to languish in obscurity, Gordy in bargain DVD bins at Walmart, and Taco Grande serving a smattering of die-hard fans scattered around Kansas. Taco Pronto will probably do the same as long as they can keep that ice machine running.

While there would probably still be a Babe without Gordy, there would be no Taco Tico without Taco Grande, so I'm immensely thankful that Taco Grande existed, and I'm glad I had a chance to eat there purely to appreciate the brand's historical significance. Thanks to a hefty investment by the Lexington, Kentucky franchisee, The Greer Companies, Taco Tico seems poised to make a comeback, at least regionally. A new Taco Tico recently opened in Lexington Kentucky, and I'm counting the days until I have the opportunity to visit. When I do, I'll probably write yet another Taco Tico-related post. You guys like those, right? 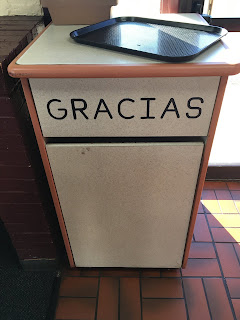 Posted by Zap Actionsdower at 7:48 PM